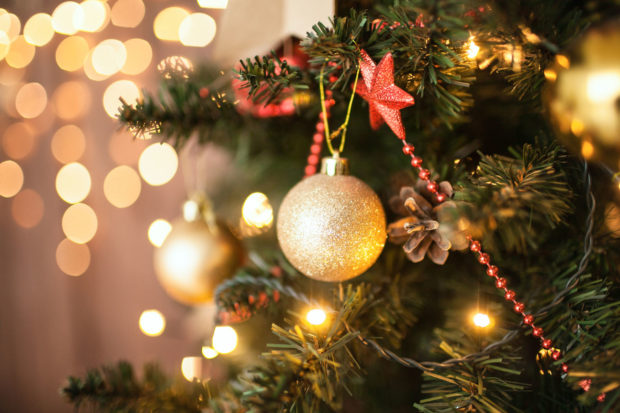 AS I walked around the top of the town over the last few days I was struck by the amount of Christmas trees peering out from behind sitting room curtains. It feels like every year we say that Christmas is getting earlier and earlier but this year there’s no doubt that more and more people have decided to start the festive celebrations earlier in a desperate attempt to put some light into a world that has been deeply darkened by the Covid-19 pandemic.

I don’t know about the rest of you, but for the first time since the outbreak began I’m starting to see sickness all around me. The numbers are higher than they’ve ever been and everywhere I turn I’m hearing sniffles and sneezes. It’s not all Covid of course but there seems to be a definite feeling of concern and uncertainty, even amongst people who think that the whole thing is a hoax.

It’s no wonder that people are clinging on to a bit of festive positivity because that’s a proven source of positivity – some much needed reliability in a world riddled with uncertainty.

And as uncertain and confused as we all are, it seems that the people who are most bewildered are the ones tasked with making all the big decisions. Remember those days when we went to the local supermarket but weren’t allowed to buy children’s clothing because it “wasn’t essential”. Remember being in a shop but only being allowed to buy certain things because there was big red tape around everything else. That was actually this year and every time I think about it, I cringe a little bit.

In November 2020, the Taoiseach, Michael Martin said the following: “An effective and widely used vaccine is the final route to recovering from the pandemic and I want to say again that this government will do everything to make sure that the Irish people have rapid, fair and comprehensive access to the vaccines.”

In Ireland, as of this week, 93% of people over 18 are fully vaccinated (some of them have started getting their boosters) while 90.7% of over 12s are fully vaccinated also. Last March, the Taoiseach went on Television and said, “I want to talk to you about where we are in the management of Covid-19 and how we safely and successfully chart a path out of restrictions in the weeks and months ahead.”

When he said that, we had put up with level 5 restrictions (since Christmas) that cut off the flow of oxygen to businesses that needed it most while bigger companies were allowed to carry on as normal. There has rarely been any consistency to Covid restrictions and at times we all struggled to find the logic as well. This is why more and more people are saying, “no more… I don’t want to hear anymore”. And you can’t blame them.

From the outset of this pandemic, it’s looked like the Government has been making things up as they go along, forever treading a delicate line between NPHET advice, business lobby groups and whatever public outcries are louder that week. They’ve never once showed the type of authority that inspires confidence and reassurance, so we’ve been left to drown in a deepening sea of uncertainty.

The moment I knew that this Government cared more about managing themselves, and their place in the coalition, rather than managing the actual pandemic was when they made Stephen Donnelly the Minister for Health. I don’t have any time for Simon Harris but he was the Minister when the pandemic started and with every day that passed, and with every new mistake he was making, he was learning on the job. Changing a Minister for Health in the middle of a health crises is negligible but nobody seems to care. In place of Harris, we got Donnelly, a man who seems to be making it up as he goes along. A man who, every time he speaks, gets a press release from his Department “clarifying” what he actually meant. The people of Ireland deserve better than this. What I’ve wanted to hear all along is that “we made a mistake” and “we are learning from our mistakes and will do better”. Instead, we’ve been confused, manipulated and had the wool pulled over our eyes by a three party Government that are trying so hard to keep their seats of power that they are willing to say and do anything to achieve that goal.

This is why we’re putting up our Christmas trees. We don’t know what you’re going to do next, so we’ve decided to grab our own little piece of consistency. We don’t know if the pubs, restaurants or theatres will be open next week. We don’t know if your secret plan is to cancel Christmas, so we’re taking it, and keeping it for ourselves.