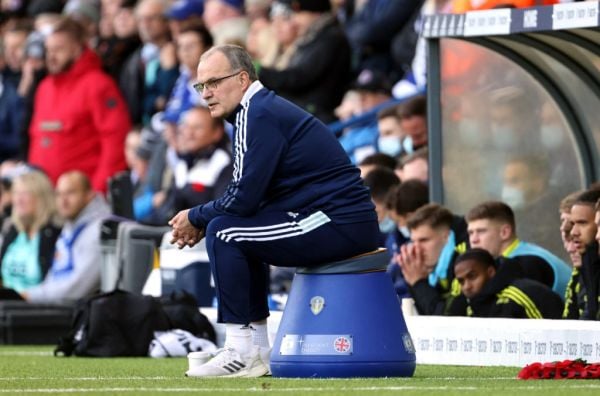 Marcelo Bielsa remains adamant that injuries to key players and the small size of his squad are not the reason behind his side’s poor results.

Leeds are bidding to avoid a sixth Premier League defeat of the season on Saturday at Brighton, which could see them slip back into the bottom three.

Whites fans have urged the club to strengthen in January, but Bielsa insists the blame lies with him and that the transfer window does not hold the answers.

“To summarise, I think the club has put enough human resources at my disposal for the results to be different,” he said.

“I can’t attribute the position in the table, nor the injuries, to an insufficient amount of players.

“Obviously what’s left is the management of the players that I have and I think that’s where the focus of attention is.”

Leeds pair Raphinha and Rodrigo are back in contention for Saturday’s evening kick-off at Brighton.

Brazil winger Raphinha missed out last week through illness and Spain forward Rodrigo was absent due to a foot injury as a depleted Leeds side lost 2-1 at Tottenham.

Jamie Shackleton has also recovered from injury and is available to Bielsa, who confirmed Patrick Bamford, Robin Koch and Luke Ayling are still not ready for first-team action.

“The only two players in the final period of their recovery are Koch and Bamford, who has an ankle injury. It has been a serious injury.”

Leeds were without six regular starters at Tottenham and seven of their nine substitutes were under-23s players with next to no first-team experience.

But Bielsa argued his preference for an 18-man squad, supplemented by the club’s leading academy players, had allowed for the development of the likes of Joe Gelhardt and Charlie Cresswell.

The Argentinian said working with a limited number of first-team players also encouraged those such as Kalvin Phillips, Stuart Dallas, Pascal Struijk and Ayling to thrive in different positions.

“Of course, when I make these observations I always measure what the public and you guys thought of their performances,” he added.

He referred to the “many signings” during his spell in charge at Elland Road, listing Rodrigo, Dan James, Raphinha, Diego Llorente, Junior Firpo and Koch.

Bielsa added: “Not to have brought in more players has allowed Gelhardt to express himself and the absences of Raphinha and (Jack) Harrison have been covered by (Crysencio) Summerville and James, and always with the acceptance of the public and the media.

“So I have to see if we really have to adhere to these demands for (new) signings or to keep the same players and to have patience.”