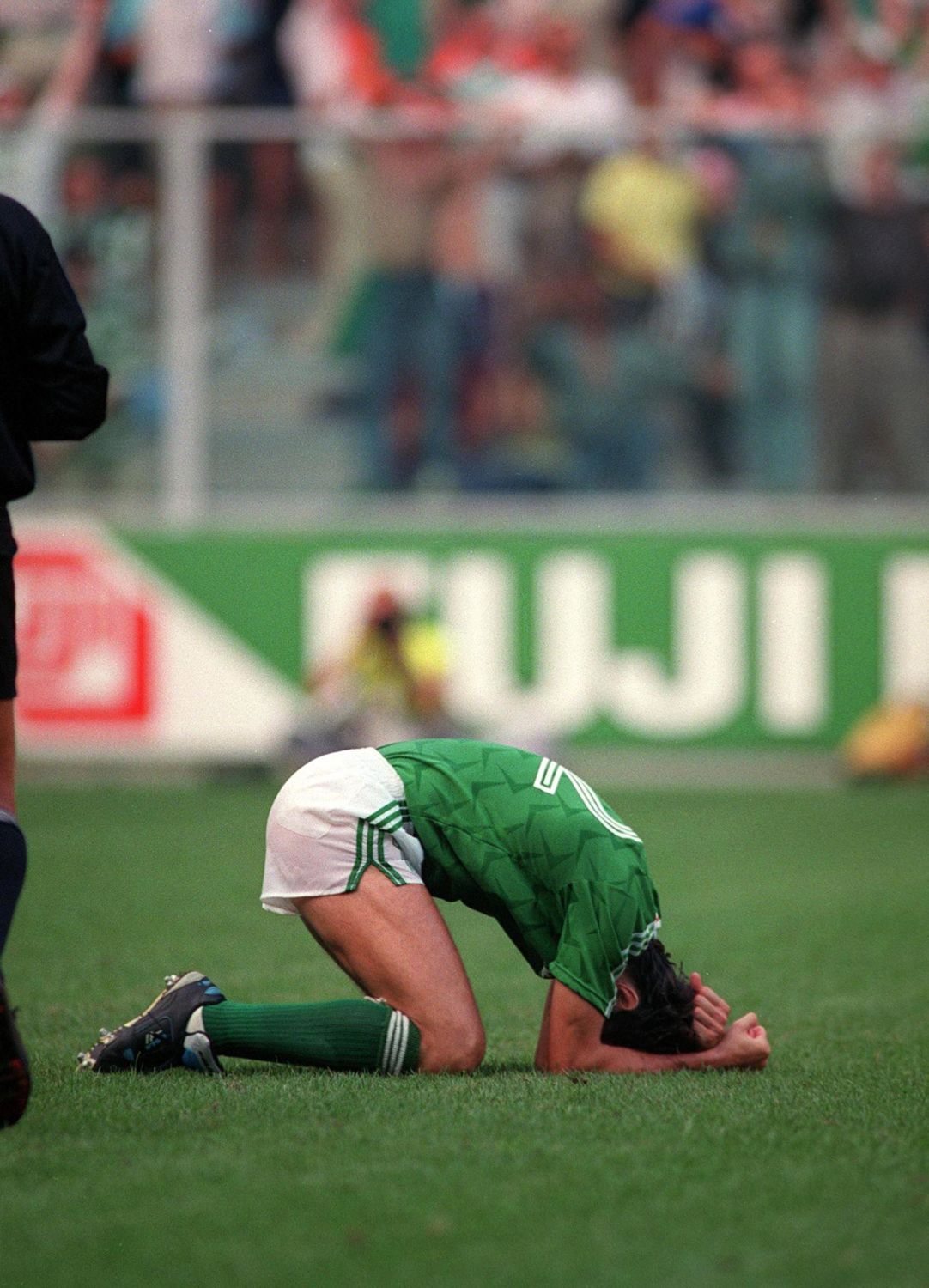 “David O’Leary is entrusted with the responsibility of taking the penalty that could send Ireland to the quarter-finals of the World Cup. This kick can decide it all. The nation holds its breath…Yes, we’re there!”

GEORGE HAMILTON has enjoyed a career which many of us who entered journalism have aspired to but can only dream of.

And he’s done it all with humility, a huge sense of fun and a gift bestowed not only on comedians but on well-versed commentators: immaculate timing.

It’s remarkable, given Hamilton’s command of so many different briefs over the years – be it soccer, rugby, athletics or classical music – that the RTÉ commentator and Lyric FM presenter hasn’t written a book before now.

And talk about being made for the audiobook market, possessing a voice as distinctive to audiences on this island as Bill McLaren and Kenneth Wolstenholme’s were across the Irish Sea for so many decades.

His East Belfast tone, at its most luxuriant when commentating on games involving the German national team or any of its famed Bundesliga clubs, is synonymous with some of the greatest days in Irish sporting history – think Stuttgart, Genoa and New Jersey.

But now that Hamilton has finally committed words to print, in the form of ‘The Nation Holds Its Breath’ (there could have been no other title), I reached this book’s conclusion with unexpected disappointment. Let me explain.

The universally admired author entertainingly takes us through his early broadcasting days with the BBC in Belfast all the way through to Jack Charlton’s final night as Republic of Ireland manager in 1995 – and that’s as far as we get. I closed the book and immediately wanted more: the goal of any author and publisher.

I can only hope that Volume II is in the offing given that Hamilton’s career has remained utterly stellar in the intervening 26 years.

And when you take into account some of the events only touched upon in this finely scripted recollection – his Olympic experiences and the Rugby World Cup for that matter – there’s got to be another book, if not two, in Hamilton yet.

Those who grew up listening to him chart the progress of Jack Charlton’s Irish team in major championships while watching him on ‘Sports Stadium’ and alongside Jimmy Magee helming ‘Know Your Sport’ have an enduring kinship with George.

For me, when recalling some of those wonderful occasions when Irish sportsmen and women got us out of our seats and leaping into the arms of the nearest relative or friend, I can’t separate George Hamilton’s elated voice from those moments.

A neighbour, about 150 metres from our kitchen as the crow flies, heard our home erupt when Ray Houghton defied gravity and Peter Shilton to put Ireland on the road to a famous Euro ’88 victory in the Neckarstadion.

Aged 11, I remember biting my fingernails for the first time as the Irish held their nerve to defeat Romania in the last 16 of the 1990 World Cup. 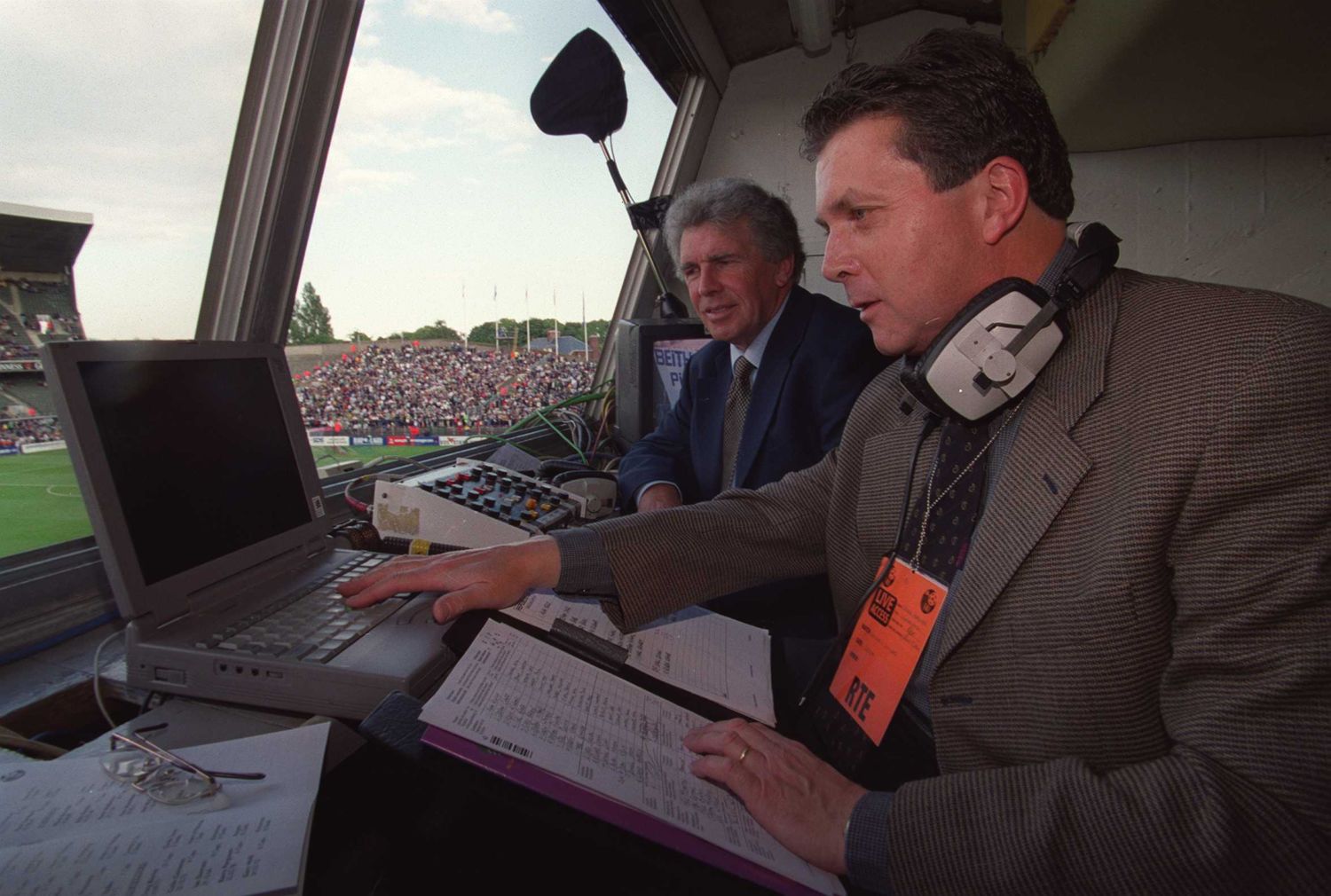 George Hamilton pictured with John Giles in Lansdowne Rod prior to the Republic of Ireland’s international friendly with Scotland in May 2000. Photo: © Inpho/Patrick Bolger

I then skipped out of my grandparents’ house on Portlaw’s Brown Street, as dozens more did likewise from nearby homes, dancing onto the footpath to celebrate the greatest day in our soccer history.

And I’ll never forget springing from a seat at the top of our kitchen and onto one of my brothers’ backs when Alan McLoughlin cancelled out Jimmy Quinn’s goal at Windsor Park to send us off to USA ’94.

Behind the microphone that night, capturing the joy of Republic of Ireland fans everywhere, was the Belfast native who has worked at every World Cup since Argentina ’78.

“A wee man from East Belfast.”

“How did I end up being the guy in the seat in Genoa that Monday afternoon”, he told Larry Ryan in a cracking Irish Examiner interview.

“Because there was absolutely no logic to it, given that I was the wee man from the Cregagh Road in East Belfast, and this was the Republic of Ireland at a first World Cup? You just couldn’t have drawn that line.”

For me, this book is defined by love. There’s Hamilton’s relationship with his parents, including a memorable trip with his Dad to see Waterford FC take on European champions Manchester United in Lansdowne Road in 1968.

There’s his unabashed admiration for his colleagues in the BBC (Joy Williams and Cliff Morgan in particular) and the joy of his ‘Know Your Sport’ collaboration with Jimmy Magee. And one can sense just how deeply he respected so many of his RTÉ colleagues – Tim O’Connor, Mary Hogan and the late Tadhg de Brún to name but three – along with his deep and abiding affection for Jack Charlton.

He writes: “They (RTÉ management) allowed their successful sports quiz, which had been pulling in audiences of 750,000 on the main television channel at its peak, to wither on the vine. There was no will to turn into a staple, like the BBC’s A Question of Sport.” 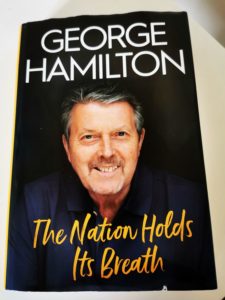 Hamilton’s initiative is illustrated through some wonderful recollections: the convoluted assembly of a commentary package from a Northern Ireland outing in Iceland and how he came to land interviews with Dutch players and manager Rinus Michels during Euro ‘88 truly stand out. There’s just so much to enjoy here.

Alas, this reviewer has two quibbles, albethey relatively minor: nerds like me love a good index, which this book lacks while some photos from disconcerting commentary positions, along with ticket stubs, press passes and pre-match commentary notes would have made for a welcome visual addition.

However, given that Hamilton’s strength as a broadcaster is his gift for language and since I could practically hear him delivering every line from this work in one man show terms as I read, it’s also an entirely explicable decision.

In his debut book, George Hamilton has evocatively and lovingly recalled some of the most enjoyable days sports loving Irish fans of the 80s and 90s have ever known. I sincerely hope that there’s more to follow from one of my broadcasting heroes.