“We’re preparing for the game as best we can” 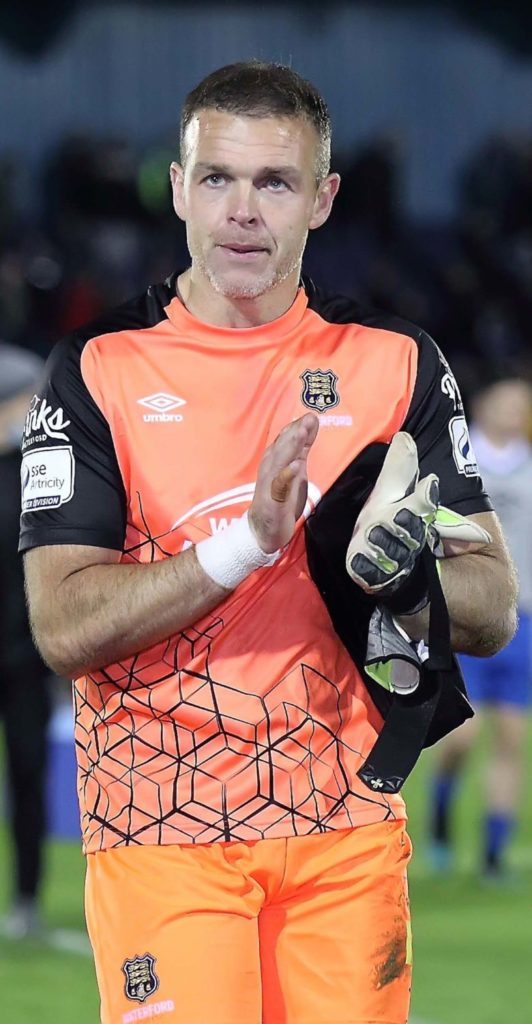 Waterford FC goalkeeper, Brian Murphy, admits that ‘it’s not normal circumstances this week,’ but the players will, ‘give it a good shot.’ Photo: Noel Browne.

With focus firmly placed on the early events of Tuesday morning that led to the departure of Marc Bircham, and the since arrival of Ian Hendon on Suirside on Wednesday, you could be forgiven for thinking that Waterford FC weren’t facing into the biggest game in their recent history.
Friday’s SSE Airtricity relegation playoff against UCD will a massive game for the club where victory is paramount to secure Premier Division status for the 2022 season, and the challenge that the Students will pose is equally massive.
Whilst there has been obvious disappointment since Bircham’s surprise sacking, the focus now has to be getting behind the players and the staff ahead of this game, and Waterford FC’s experienced goalkeeper Brian Murphy knows how big the challenge is.

A MASSIVE GAME
The netminder admitted that “it’s not normal circumstances” to be preparing for a game of this magnitude, but that the players are preparing “as best we can” for the challenge that lies ahead with a massive effort needed from everyone to get the win.
Speaking ahead of the relegation/playoff final, the Blues netminder said, “It’s a massive game for us. I think we said four months ago that if we got a playoff from the position that we were in that we’d be doing well. Our form was so good that we got a lot of hope that we would get out of it.
“We just ran out of games in the end with a small squad. The lads have been working hard to get there, but look we haven’t quite stayed up on merit so we now have to do it the hard way with a tough game against UCD. We’re preparing as best we can for it.
“We were missing a few lads last week, and they are important players for us. It was disappointing for us to lose them on so few bookings with the way the system works here. It’s good to have them back, and I think that we nearly have everyone fit from the ones that are injured.”

A BIG EFFORT NEEDED
“Look we just need a big effort from everyone on Friday. Luckily enough we have played UCD this season in the cup so we’re not going into the game blind. We know what they are about. They have some very good attacking players. We need to be at our best really at both ends of the pitch to get a result.
“I think that if we can go out and put in a performance maybe like we’ve been doing the last few weeks, the result might fall for us. I think in the last four or five games, we’ve played reasonably well overall. We’ve let ourselves down in certain things, but if we can put it all together on Friday, we can get the result.
“In normal circumstances, you just go to win it. A cleansheet and a one nil, you take it, but if we can win a bit more comfortably that’s the main thing. It’s not normal circumstances this week for the players with everything that is going on behind the scenes.
“It’s been a little bit unknown and uncertain on how we’re going to approach Friday, but at the end of the day, we’re paid to play football. We’ll regroup the lads, and we’ve had a good training sessions. Hopefully we’ll get a good idea of how we’re going to play on Friday, and we’ll give it a good shot.”