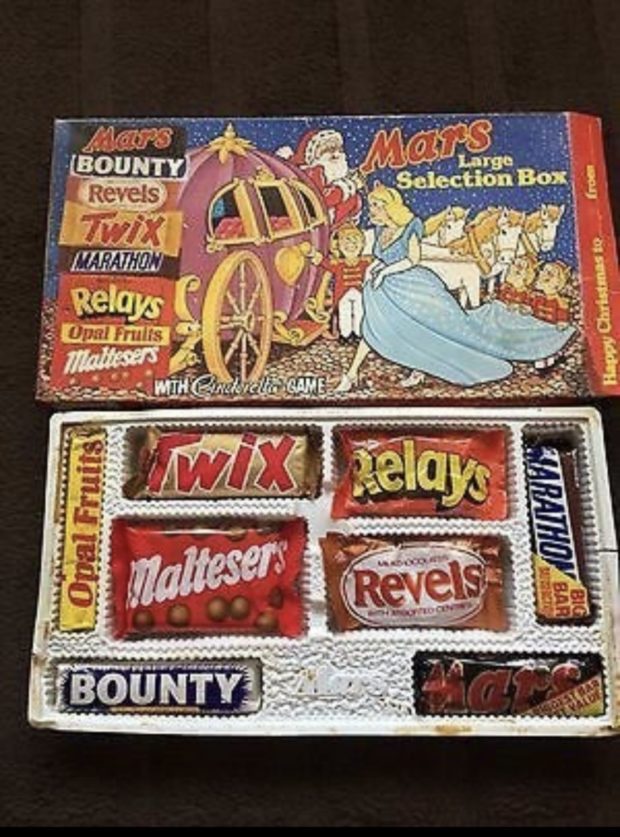 I REMEMBER it like it was yesterday. Creeping downstairs in the still of the very early morning, hoping to not wake the rest of the house, who, incredibly, were still asleep. I couldn’t understand how anyone could sleep through this.

Today, of course, I understand it, but back then I was absolutely immersed in the magic of Christmas. Before I turned on the big light in the sitting room I’d see the wrapping paper from the presents glistening in the darkness. I was the baby so I had the big couch, the older brother and sister had the armchairs for their ‘older person’ presents. They’re both hurtling headlong towards their fifties now, God help them.

Aside from the ‘big’ presents, which were always amazing, there were also smaller gifts that, on any other day of the year, would have been a fairly substantial treat. I’m talking about things like annuals – Dandy, Beano, Shoot, Buster, Big Comic Book Fortnightly – top class publications. I’m also talking about Selection Boxes, which back in the 70s, 80s and early 90s, had a touch of magic about them. At the back of the box was an activity of some kind, something that would be so far down the pecking order of entertainment on Christmas Morning that it was barely visible, but was appreciated nonetheless. I can remember getting one of the Selection Boxes from the Waterford Glass Christmas party and because we were trying to distract ourselves from the Christmas Countdown I took a scissors to it and by God I cut out that board game. You know the one, you have to cut out the dreidel that you’d use instead of a dice and then you’d have to negotiate your way around the board before getting home, which was usually the North Pole. Simple, cheap but effective fun.

Back in those days, large companies actually cared about doing things like that. You’d find gifts in cereal boxes and everything didn’t feel so sanitised and clinical to the point of absolute misery. The magic of Selection Boxes disappeared in a tsunami of capitalism. Gone were the full size bars, that we’d only eat at Christmas (Caramels, Flakes and Fudges anyone?), which were replaced by infant size bars in half-arsed festive packaging. Yes, the selection boxes (notice how I’m not capitalising them anymore) reduced in price, but they also reduced so much in magic that they may as well have handed out the bars in brown paper bags.

The same can be said about the boxes of Roses and Quality Street. Remember when we used to call them Irish Roses? That’s when they meant something. That’s when they had some kind of identity. That… is when they were magical. First of all, they wouldn’t be on sale in f**king August. Trying to shove soul-less sweets into our gobs while the sun is still shining at 10pm is not my idea of Christmas magic. Back in 1991, a tin of Irish Roses was about a tenner and the smaller boxes – do you remember the ones that had a string on them – were £3.99. Even the string was a classy touch that made it look like someone actually cared about what they were doing. So, they were dearer than what they are now, but they were infinitely better. Firstly, the chocolate was superior. I don’t know what they’ve done to the ingredients or what sugars the EU demanded they remove, but Roses and Quality Street and the like are not as nice as they were 30 years ago.

Secondly, the packaging is mortifyingly bad. A tin of Irish Roses 30 years ago was good enough to become a sewing box for the following 50 years – that’s the quality I strive for in a box of Christmas sweets. Secondly, the individual wrappers are a poor shadow of what they used to be. Remember the little mini dairy milks that were actually wrapped like a proper Dairy Milk Bar? That oozed class so it did. A tin of Irish Roses was a treat that the family would systematically plough through during Christmas Day and St. Stephen’s Day, with the coffee sweets still hanging around when the kids were going back to school. Only then would we attempt to eat them because there was nothing else in the house and it was still chocolate after all.

I used to bury my head into the tins of Roses and Quality Street and it smelled like Christmas. That’s why this season is so important to so many people – there are so many little reminders of how special it can be. Nowadays, tinned sweets are ten-a-penny and people are absolutely sick of them by Christmas Day because they’ve been eating them for four months solid.

I honestly grieve for the magic that has gone from our lives. I wish there was some way we could petition these companies to start following their hearts again. It’s only a matter of time before they just f**k the sweets into a tin without any wrappers at all.