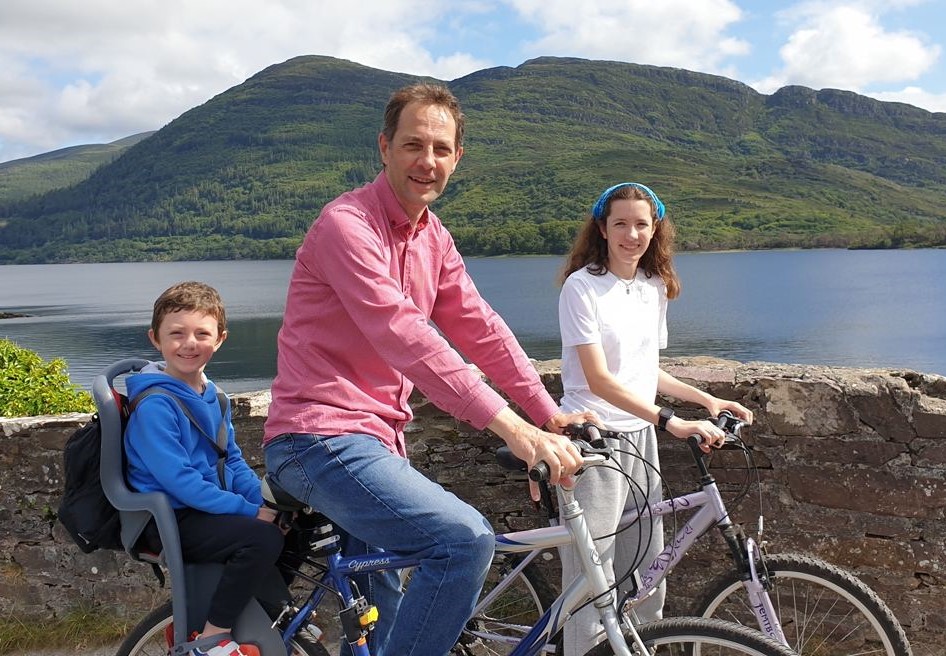 James Mernin is a Chief of Staff and Director of Software Engineering at Red Hat, a multinational software company (owned by IBM) that set up a base in Waterford in 2014 after it acquired WIT spinout company, FeedHenry. James is also Site Lead for Red Hat in Waterford. Born in Clonmel, he lived in Cappoquin until age 5 and moved to Waterford City in 1976. He proudly graduated from WIT (formerly WRTC) in 1992 and spent 13 years in Dublin, before returning to Tramore, where he now lives with his wife Joyce and children Kelly (17) and Bobby (5).

I’m fortunate to be able to take my son to school every day and I find the fresh sea air and great views from Gaelscoil Philib Barún a great tonic to start the day. Much of my working day is spent in meetings, which are currently 100% virtual, working with Red Hat colleagues based all over the world, from Brisbane to Los Angeles, helping to develop cloud computing services. I also promote Waterford as a technical base within Red Hat, based on our terrific graduate pipeline from WIT. My evenings are normally spent helping out with the family routine, after which I enjoy watching some TV with an occasional glass of wine, while catching up with my wife about the day’s other events.

I remember starting school in Cappoquin but it was just for a few weeks as we moved to Waterford City shortly afterwards. The rest of my school life was spent at Mount Sion CBS, where I was also a member of Mount Sion Silver Band, playing the cornet (similar to a trumpet). I earned my right of passage as an Irish citizen there too, taking part in countless wet and windy St Patrick’s Day parades and appearing on the Late Late Toy Show in 1986.

I have great memories of two teachers at Mount Sion. Firstly, Br. Devitt taught me (and countless others) how to read music and how to listen to others doing the same. In fact, several band members went on to become professional musicians on the back of what they learned from Br. Devitt. Heading towards my Leaving Cert years, I credit John McArdle (Secondary School Principal until quite recently), with teaching me the art of good exam preparation, or generally the art of planning for anything. Another great teacher I had, albeit outside of school, was Timmy Kiely from Dungarvan, who gave me my first part-time job (Kiely’s Butchers, Lisduggan Shopping Centre). By far the best teacher I’ve had in my life, though, was my father. He gave me so many skills to navigate life by involving me in everything he did. He never actually told me how things were done but instead let me try them myself, and I always learned more that way.

The first thing would have been to buy tonnes more vinyl albums, because they’ll be worth a small fortune when you’re older. That, and never sell your first electric guitar. I had two gorgeous guitars which I sold before moving to Dublin, which I always regret doing. Also, give better compliments to girls who’ve had their hair done. Going to an all-boys school, you’d often get a hard time after a haircut, so you generally tried to conceal that. This approach led to one of my all-time, worst first-date moments. On arriving at the arranged meeting point, surrounded by her female friends, my date asked me what I thought of her new hair-do. My response was an eyebrow raising, “You’re grand, no one will ever notice!” #Awkward

I’ve always been a huge LEGO fan and love nothing better than cracking open a (new or old) set and spending time making it with my kids. I quite like rock music too and own several guitars, so I like trying to recreate the riffs to some rock classics. I’m rarely successful, mind you, but most of the fun is in trying, like anything in life. I also find watching movies very relaxing.

While they may not have the greatest plot line or script ever, some of my favourite movies are actually ones where I just happened to be in the mood for that kind of film at that exact moment, and the experience stuck with me. I guess you can’t go wrong with ‘Star Wars: Episode IV’, or anything by Spielberg or the Coen Brothers, and who doesn’t love Brad Pitt’s accent in ‘Snatch’? In terms of music, I love pretty much anything by Van Halen but would just as happily listen to Liam O’Flynn’s masterful Uilleann piping with Planxty. On a very personal note, ‘Rooftop Lullaby’ by Jack Lukeman holds a special place in my family’s heart. Those that know me will understand why.

My father’s anniversary was quite recently and that’s always hard. However, seeing and hearing my young son explain how he misses his Grandad, and how he rationalises his passing, regularly brings a tear to my eye.

My amazing wife recently arranged a surprise, child-free holiday in Portugal with three other couples to celebrate my 50th birthday (or 51st orbit of the sun, as I call it), complete with a chartered yacht overlooked from our three-storey, penthouse apartment above a marina. I’ve also recently started to teach my daughter to drive and I’m thoroughly enjoying that. I’m not sure the same could be said for her, yet, though.

Not in the traditional sense. I’m not heavily opinionated on religion and deeply respect those that do pray. I’m quite a spiritual person, often taking comfort by connecting my inner thoughts, in my own way, with those that have passed on to their next life. I’m okay with that.

I don’t appear to have a classic fear of heights but I’m not too great at the top of a ladder, and you definitely won’t catch me doing a bungee jump. Apart from that, I’ll give most things a try on the basis that you can’t say you don’t like them unless you’ve tried them.

My Dad’s classic motorbike. It’s quite a rare bike (a first edition, 1970 Honda) but has immeasurable nostalgic and deeply personal value to me and my family. I’m also heavily invested in my digital photography collection, capturing my kids’ childhoods.

One of the things I’m most proud of is the growing tech scene here. When I graduated from WRTC in 1992, there were literally zero tech jobs in Waterford and I had to move to Dublin to start my career. While I don’t regret that for a second, it’s terrific that our current graduates have so much more choice than I did, and I like to think I’m doing my bit in helping create the conditions for that to continue. My other favourite thing would have to be the view from Dromore, near Villierstown, looking up along the River Blackwater towards the Knockmealdown mountains.

Given the incredible talent pool that exists in the South East (I’d know, Red Hat has hired most of them), it drains me to see so many school leavers choose other academic institutes purely on foot of their name. So, full University status would be a top ask. That, as well as a functioning airport, as anyone who’s ever flown from Waterford Airport will agree. What’s not to love about being back at home with the kettle on in the time it takes to walk to the baggage reclaim in Dublin or Cork!