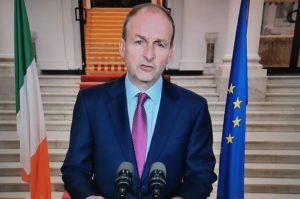 NEW measures announced by Taoiseach Micheál Martin this evening have been labelled a “logistical nightmare” by a local theatre producer. The new restrictions include the return of table service only in bars, as well as a maximum of six people to a table, with at least a metre between each table. Multiple bookings for restaurants, bars and other hospitality settings will also no longer be permitted.

Nightclubs, which only reopened in October will have to close again until at least January 9 and the capacity at indoor events like concerts and theatre shows will be reduced to 50%.

Speaking to the Waterford News & Star tonight, Padraig O’Griofa, one of the producers of A Christmas Carol, which opened in Garter Lane on December 1, said the announcement has created a “logistical nightmare”.

“We’re crestfallen to be honest,” Padraig said. “How can we tell one half of an audience that they can’t come and see the show, after tickets have already been purchased. We could potentially be telling one half of a family that they can go while the other half must stay at home. We honestly don’t know what we can do in this situation but we have asked Waterford’s political representatives for advice, and frankly, for help. This is a private, professional production which has already cost a significant amount of money. There are a lot of devastated people out there tonight but you know what, we’re show people and the show must go on.”

Additional measures announced by the Taoiseach tonight include a limit of four households for any gathering indoors. In his address, Deputy Martin said his message was a “difficult one” but they have received stark advice from CMO Dr Tony Holohan that requires the reintroduction of some restrictions.

“It is difficult because even though Ireland has done very well as a country and you have done everything that has been asked of you, we have received some very stark advice from our Chief Medical Officer and our Public Health Experts that requires the reintroduction of a number of restrictions,” he said. “We will do whatever we reasonably can to stop this new variant from circulating in the country, but we have already confirmed one case and all of our experience to date shows that while restrictions on travel are useful to delay the entry of new variants, it is impossible to stop them,” he said during his address.”