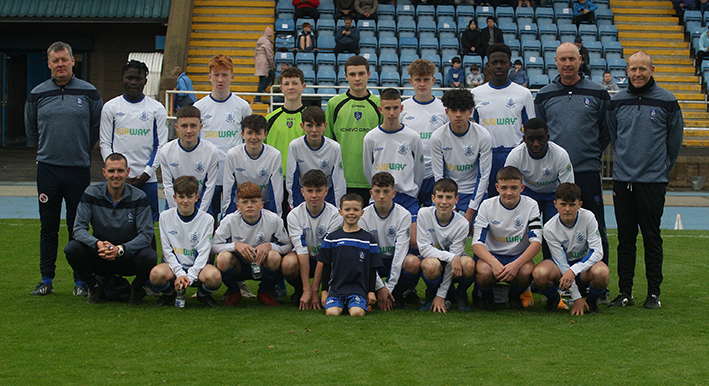 The 2021 Kennedy Cup squad are one win away from a final appearance. Photo: Paul Elliott.

The Waterford Schoolboy League are just one game away from reaching their first SFAI National Kennedy Cup Final since losing to the DDSL back in 2014 when Nigel Ray’s side face a tough Cork Schoolboy League side at the RSC on this Sunday afternoon, December 5, with a 1pm kick-off.
After their brilliant win over the Wexford League in the quarter-final, it will be home advantage once again for this group of players as they try to enter themselves into the history books in earning Waterford a fourth title success in this famed competition.
Whilst the 2021 format of the cup may be different to norm through the Covid 19 Pandemic, this date with semi-final destiny for these young players from both Waterford and Cork is a massive one, and it promises to be another mouthwatering encounter.
Ray, who is joined on the sidelines by Gary Coad, knows that the challenge against Cork is a massive one, and there’s no doubting that the Rebels will come to the RSC with real determination to spoil the party especially as they go in search of a final appearance.
“We’ve trained very hard since the quarter-final win over Wexford,” admitted Nigel Ray in the this week. “The players have been excellent for us all season. Every question and challenge that has been thrown at them, they’ve answered, but we know that we face our stiffest test to date against Cork.
“There’s a real rivalry between Waterford and Cork whenever we meet at any level of Inter League, and Sunday’s semi-final is a game that we’re really focussed on winning. We’re determined to reach the final, but we have to respect our opponents.
“There was parts of the game against Wexford that we know that we can improve on, and we’re going to need to when we face Cork. They are a good and physical team. They are a very good footballing side, but our lads have continued to answer the call for us so we’re hoping that they can do it for us again.
“As I said after the last day, it’s great for the players and management to be still in with a chance of winning the Kennedy Cup, and I think it showed what it meant to the boys after the last game. There’s a real focus in the squad that we can reach the final, but there’s a semi-final to be played first.
“Cork will come here to make life difficult, and our lads will have to be on their game from the opening whistle, so hopefully we’ll bring our top game to the table. If we do we’ll be in with a good chance of winning. We know it will be tough, but these lads are looking forward to it. Hopefully a home crowd will really get behind us.”