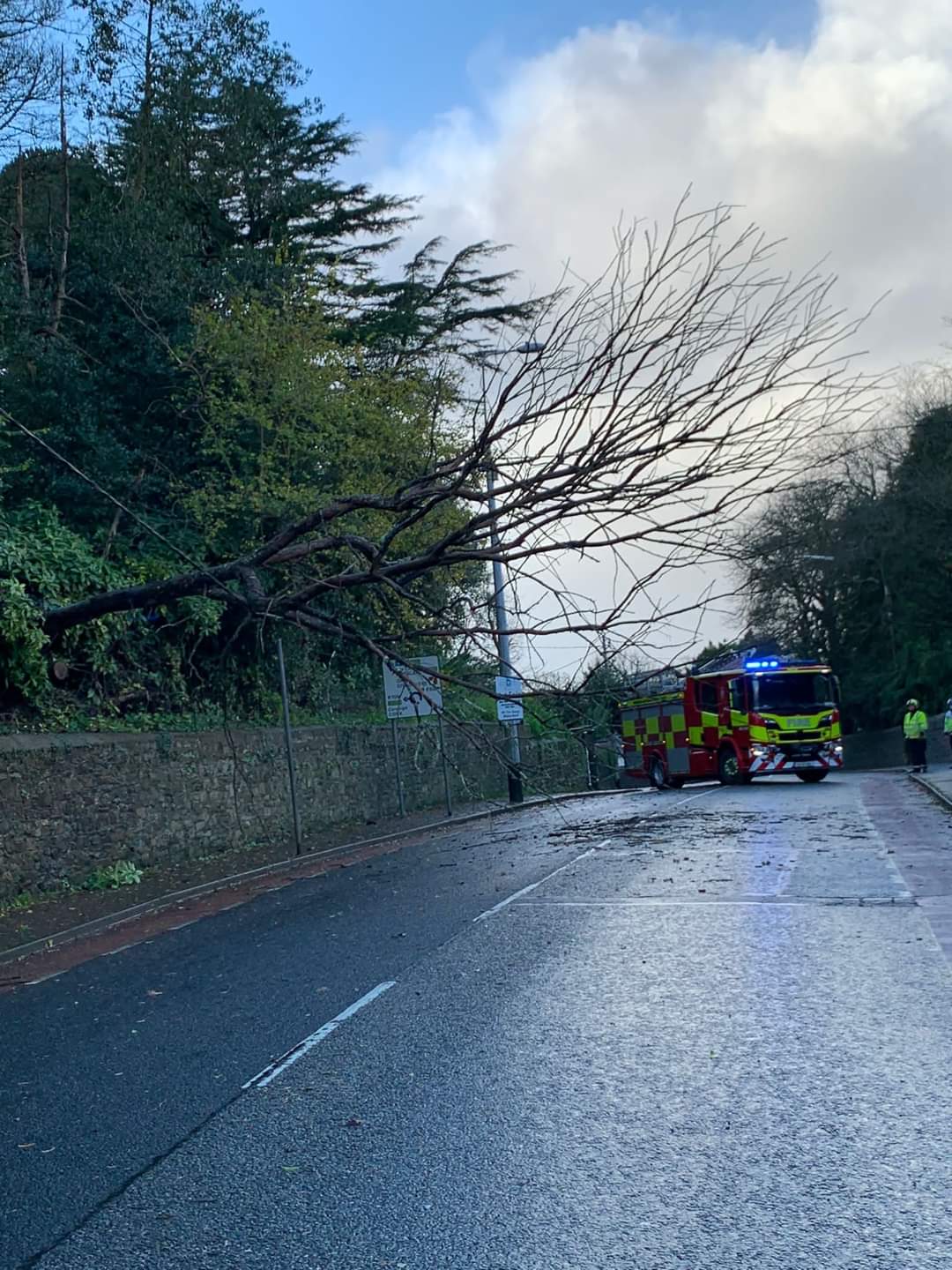 A tree which fell on the Dunmore Road this morning was promptly cut and cleared. Photo: Waterford City Fire Service

THE street lights that had been off outside University Hospital Waterford, as well as along the Dunmore Road and the Park Road, were back in action just before 5pm this evening.

A single trawler had availed of safe harbour at Frank Cassin Wharf while four more vessels were berthed two by two on Merchant’s Quay.

With Ireland’s tallest Christmas tree standing resolute in John Roberts Square following high winds both this morning and afternoon, the only noticeable difference to the Quayside was the dimmed Waterford Eye, which obviously didn’t operate today.

With Winterval’s 32-metre-high big wheel in darkness, hopes of a brighter, calmer Wednesday remain reasonable – but caution would appear to be the order of both today and tomorrow.

The Department of Education is advising all schools in counties under red and orange weather warnings (with Waterford in the latter) to remain closed tomorrow as this will allow for an assessment of the storm’s impact to take place. This directive also applies to Waterford Institute of Technology.

A Department spokesperson told The Irish Times: “Schools that are no longer in a red or orange alert area can reopen, provided that, if there are concerns, schools managers have had an opportunity to check for fallen wires and other serious damage in the vicinity of school buildings. If an individual in a yellow area (i.e. Kilkenny and Tipperary) is still experiencing a particular local issue relating to the storm, the Board of Management can make a decision to remain closed for tomorrow.”

In an update issued within the last hour, Waterford City & County Council has continued to advise people not to travel and to avoid coastal areas.

Across the city and county, the local authority safely and promptly cleared fallen trees at several locations, including the Dunmore Road, Faithlegg Road, the N25 between Newtown Cross and Dunphy’s Pub and Garrnbane Road near the Ballinroad Cross.

Said Council Senior Engineer Gabriel Hynes: “Strong gusts of winds are forecast during the night with the possibility of high winds reoccurring. We have seen throughout the day that this can lead to trees falling, blocking roads and paths. Driving conditions will also be hazardous as there are a lot of fallen branches and debris on the roads.” 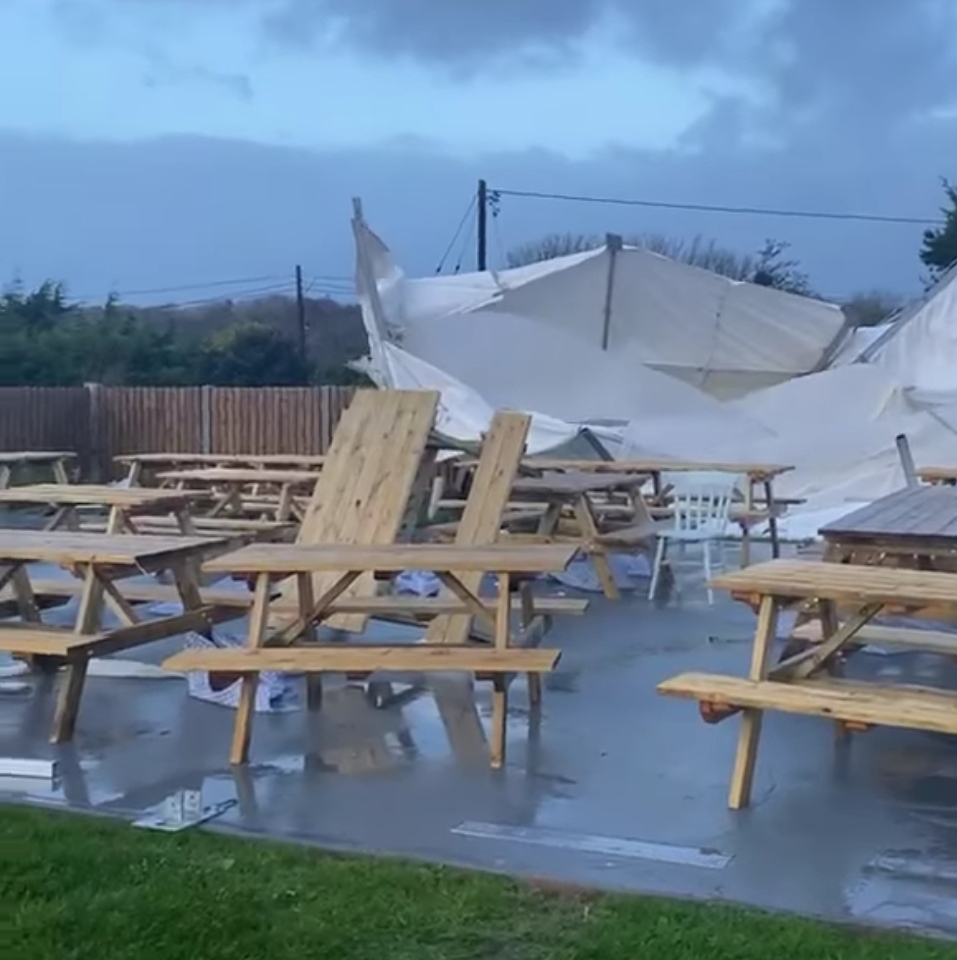 Damage at The Saratoga Bar has forced management to end its Christmas Market. Photo: Saratoga Bar/Facebook

Mr Hynes added: “While most of the incidents the Council dealt with today involved fallen trees, there have been incidents of structural damage to some properties in the city. This highlights the strength of the gusts of wind, and as Storm Barra is not expected to abate until tomorrow morning, please keep indoors this evening.”

It’s also been a busy day for the Waterford City Fire Service, which was on hand on both The Mall and Paddy Brown’s Road to make several structures safe following high winds. On a Facebook post, the service stated: “Loose tiles, lead flashing, and overhanging guttering can make a building dangerous to the passing public.” The service also assisted the City & County Council after this morning’s Dunmore Road tree fall.

Substantial storm damage at the Saratoga Bar (Woodstown) has forced the cancellation of its remaining Christmas markets. Acknowledging the support the market has received in recent weeks, a Facebook post from the bar stated: “Thankfully, our bar and kitchen has not been affected by the storm damage.”

Meanwhile, the Council is stressing that Waterford’s coastal areas should be avoided as the OPW High Tide Advisory Notice remains in place for tomorrow, December 8.

“The storm surge around the Waterford Estuary is forecast to be significant and in the range from approximately 50cm to 60cm, and this will coincide with astronomical spring tides close to Highest Astronomical Tide (HAT),” a Council spokesperson noted.

“This will result in the HAT being exceeded in many coastal locations especially those associated with Orange and Red wind warnings. 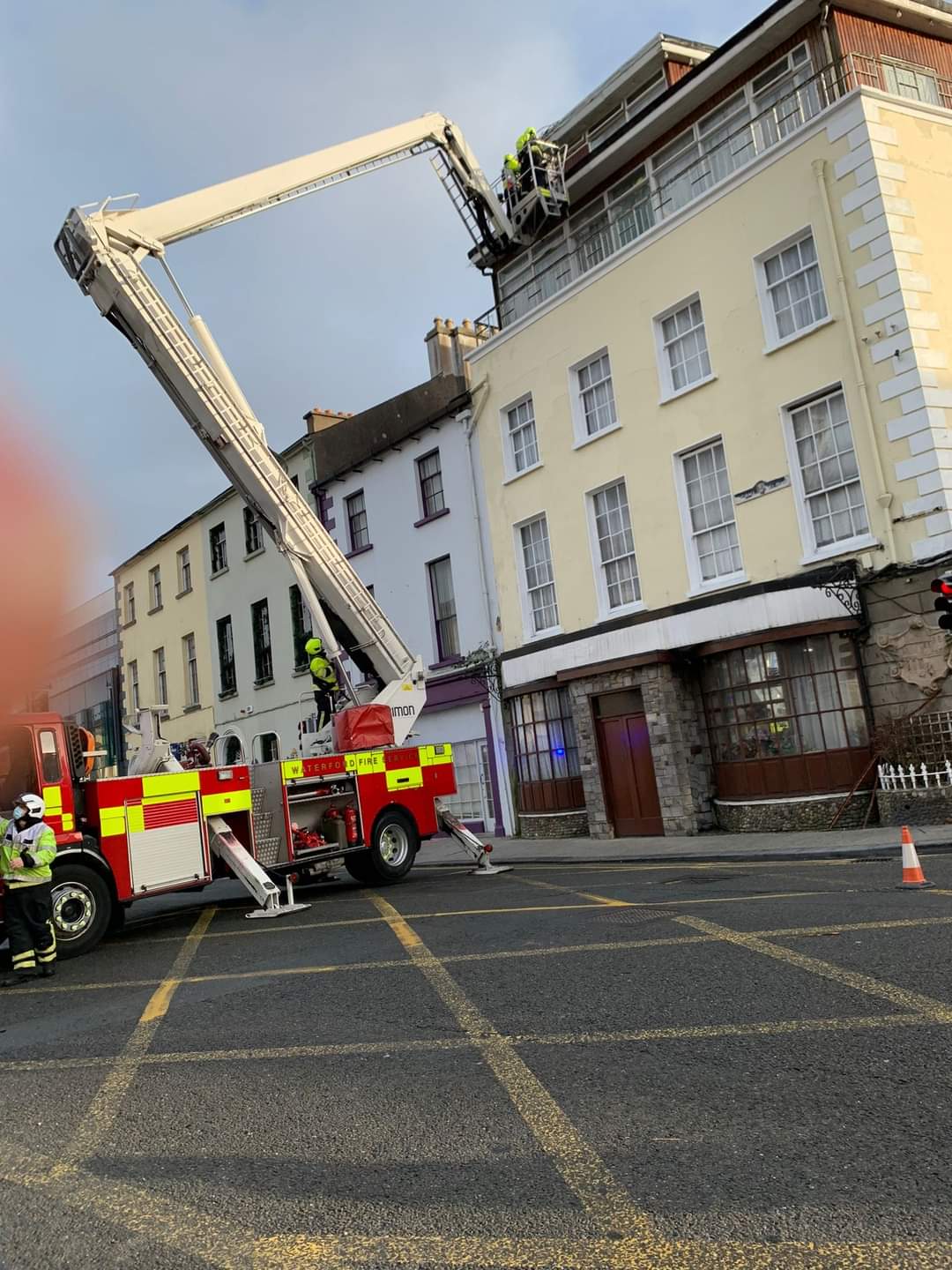 “All appropriate flood defence barriers have been erected and the situation is being actively monitored. There was some flooding today in Dungarvan at high tide (Davitt’s Quay, Cois Trá, the Lookout, Park Hotel Road) due to overtopping, and incidents of spot flooding in the city and county which were dealt with by Council crews earlier this morning. The Prom in Tramore has also been closed.”

Plunkett Railway Station re-opened this afternoon following earlier flooding while the 16:25 Waterford to Limerick Junction service has been stopped at Clonmel due to a tree on the line.

At 6:26pm, reports of a fallen tree and ESB pole at Ballyshunnock – between Porltaw and Kilmacthomas – had reached the local authority, with engineers and ground crew already in attendance.

Members of the public can continue to contact Waterford City & County Council’s Customer Services Desks on 0818 10 20 20 during normal office hours after which calls will be transferred to the Council’s emergency services number or email [email protected].

Should you wish to highlight any alerts in your area this evening, please email [email protected]