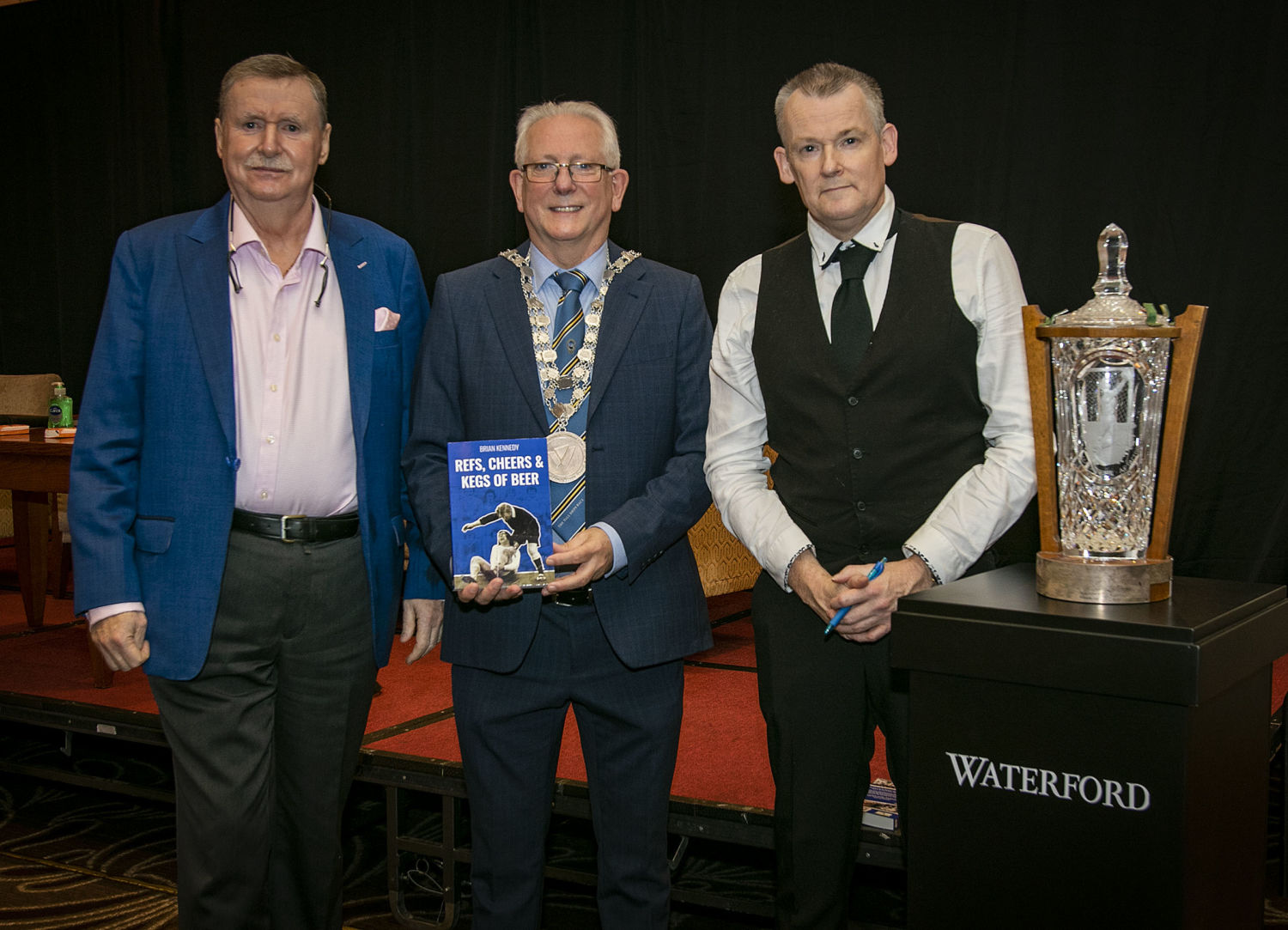 An array of football personalities were present at the Tower Hotel on Saturday week last for the official launch of a new book, written by local writer Brian Kennedy, called “Refs, Cheers & Kegs of Beer” dedicated to the famed Pubs and Factory League competitions.

In this his 14th book, Kennedy details the history of the local Pub and Factory League finals whilst also putting in a lot of effort into marking the 60th anniversary of the Irish Soccer Referees Society by profiling some great characters that donned that jersey throughout the years.

The event was held in line with Covid 19 guidelines to a max and sold out audience where key speakers on the night included Mayor of Waterford Cllr. Joe Kelly, who played in the competitions, sponsor John O’Donohue Solicitor, and the author himself Brian Kennedy.

Many stories were told throughout the night where absent friends like Johnny Matthews, Jimmy O’Neill Snr, Mattie Stafford, Willie O’Callaghan, Gene Roche, and countless others were remembered for their association with refereeing and the two competitions.

The brainchild of Kennedy, the book, which is currently on sale at the Book Centre in Waterford, gathered the support of former FAI Cup final referee Jim O’Neill and chief sponsor John O’Donohue, and it really is a great read with some brilliant memories.

With the support of the local Waterford Junior League committee, the trophies for the respective competitions were dusted down and on display on the night, which might give food for thought to bring back the events in the near future.

Paying tribute to those who helped with the book, which included articles from the late Leo Dunne, and photos from Noel Browne and Paul Elliott amongst others from the Waterford News & Star archives, Brian Kennedy said, “I’m delighted with the way the book turned out and with the support I received doing it.

“When it came to me that nobody ever wrote a book about the Factory and Pubs Leagues, it encouraged me to do so. Jim O’Neill came to me back in January about putting something together, and with the support of my partner Samantha, here we are. I’m also delighted with the turnout that we have here tonight.

“When you think about the two competitions, there is so many familiar names that people will remember, and it’s great that so many of them are here in the room. I’m honoured to have the Mayor here, and also to John O’Donohue, as without his support the book wouldn’t have been possible.

“I’m also thankful to the Waterford News & Star and Munster Express as they’ve been very helpful. I’m grateful for the support that I’ve received, and I’m delighted to have put together so many brilliant memories that will be there for years to come.

“The hardest part of the book was the last part because there are so many great characters that are no longer with us, and we remember them tonight, including my cousin Roy Butler. I hope you enjoy the book and here’s to many more years of great football memories.”