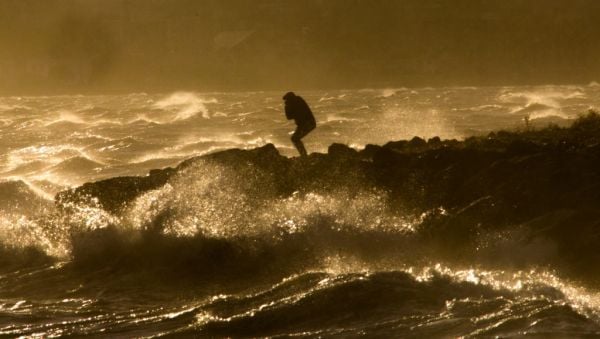 Swimmers in Dublin took to the waters in the north of the county on Tuesday despite Storm Barra weather warnings.

As reported in The Irish Times, sandbags along Clontarf promenade could not stop the waves submerging the seafront park.

Storm sightseers also crossed the wooden bridge to Bull Island before it was closed by Dublin Port Company.

Dublin City Council had to close car parks at Clontarf and Sandymount, as well as all the flood gates on the River Dodder. A number of other locations around the capital were also shut such as Merrion Square Park, St Patrick’s Park, and Mountjoy square.

South of the county, Storm Barra brought waves over the East Pier at Dún Laoghaire, with the harbour, all parks and all piers closed in the area.

Dún Laoghaire-Rathdown County Council said it was “closely monitoring the progress of slow-moving Storm Barra and possible adverse weather” overnight and into Wednesday.