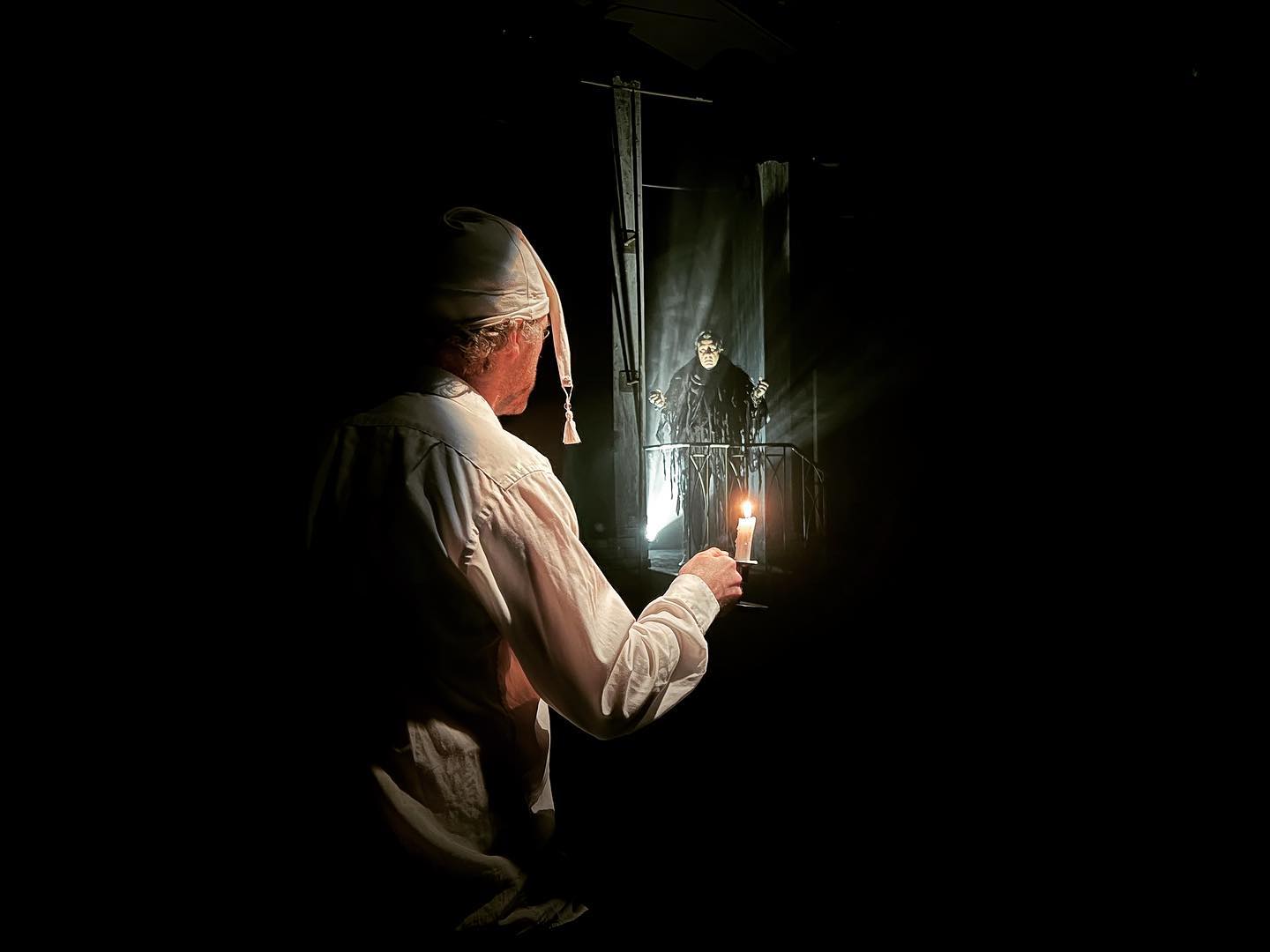 YOU know you’ve witnessed something magical when an entire audience to a play stands up and cheers. Tonight’s Garter Lane audience had experienced something profoundly special in this Garter Lane production of the Dickens classic. Because this is not simply a story about Scrooge. It’s one of loneliness and what happens to the human soul if it is isolated, withers, and all but dies.

Adapting Dickens is not easy. A Christmas Carol has as many characters as the cast of a sprawling epic. The characters and their sub-plots just keep coming and coming and they all tie into the main storyline. So… hats off to producers Michael Grant and Pádraig Ó Gríofa and Director Liam Meagher for a first-class adaptation of this timeless classic of loss and redemption that is set within a period that Dickens, more than any other, has defined as Christmas.

Dermot Quinn has fashioned a powerfully-lit melodramatic set that brings us everywhere from Scrooge’s miserable living quarters to balconies that house terrifying ghosts to doorknobs that alter shape before our eyes and haunt our fears as we pass through the Garter Lane Arch after the curtain has fallen. We can feel Scrooge’s terror when he strides across the underlit wooden-slatted floor that reminds him and us of the fires of hell, purgatory and everlasting torment. Heather Troy’s filming and editing facilitates so much of the play’s experience through constant reminders of Scrooge’s terror and of where the story is at. And Jamie Beamish’s sound design is so deftly woven into the fabric of the production that it almost goes unnoticed. Apart that is from the pounding chimes that seem to come from deep within the bowels of hell.

And what a Scrooge we have in Andrew Holden. The mean and menacing face that we have become accustomed to seeing all around the city for the last month in Garter Lane’s brilliant advertising campaign masks the profound change this actor delivers in a towering performance. Andrew brings us on his journey of redemption from a leering, jeering and menacing Scrooge through pain and torment to a skipping, laughing Uncle Ebenezer that bonds anew with his nephew – the son of his sister Fan whom Scrooge adored – and becomes a kind and loving grandfather to the sickly cripple Tiny Tim (Dickens based the character on his own nephew Henry, a disabled boy who was five at the time A Christmas Carol was written). Holden always brings us behind the mask of the much-feared Scrooge, through all that miser’s seeming indifference and contempt, to reveal the profound humanity of a man who suffers through his own self-isolation in order to protect himself from a world that was hostile and indifferent to his own fragile feelings.

Ensemble acting here is top-drawer and all the actors play more than one part. A remarkably clean-shaven Joe Meagher gives a stellar performance as the loyal and timid Bob Cratchit who struggles to keep warm from the heat of a candle in Scrooge’s Counting House and also manages to terrify the life out of the audience as the ghost of Scrooge’s business partner, Jacob Marley. All actors play multiple parts as well as principal characters. Kieran Walsh is a kind and loyal nephew Fred; Ann O’Riordan is warm and sympathetic as Scrooge’s first love, Belle; Shauna Farrell is a devoted but independent-minded Mrs. Cratchit; Sinéad Hourighan is a garrulous and up-beat Christmas Present who could drink the entire cast under the table, while Devlyn Lonergan is a kind and sympathetic ghost of Christmas Past who provides the backstory to Scrooge’s character as does Charlie Meagher as Young Scrooge. The ensemble cast is completed by a young cast of Pearson O’Keefe, Logan O’Keefe, Cara Daly, Sarah Roche, Jodie Behan, Lochlann Cooke and Tobie Cooke.

Nobody tells stories like Dickens and Director Liam Meagher uses multiple characters as narrators to move the storyline along. Inset mini-scenes from Scrooge’s Counting House to Bob Cratchit’s sitting-room to nephew Fred’s house keep the story moving at a cracking pace and allows time for Scrooge’s self-doubt to set in. Video screen projections fit seamlessly into the production to enhance the plotline and the melodrama of the piece is beyond powerful. Meagher’s direction is right on the money because the focus is always on the story of Scrooge’s redemption. And nobody tells stories like Dickens.

A Christmas Carol is the biggest box-office Christmas tale ever written. It earned Dickens a fortune. Published on December 19, 1843, the first edition sold out by Christmas Eve; by the end of 1844 thirteen editions had been released. Later editions carried the line, crafted by the publisher, “and Tiny Tim lived” at the insistence of the public who refused to hear of any unhappiness in the ending. The book has never been out of print and has been translated into several languages and has been adapted many times for film, stage, opera and other media. A Christmas Carol captured the zeitgeist of the mid-Victorian revival of the Christmas holiday and Christmas, as we know it, owes its depiction to the book. In 1849 Dickens began public readings of the story, which proved so successful he undertook 127 further performances until his death in 1870.

There was magic in the air tonight at Garter Lane. You could feel it in the huge emotional shove of Tiny Tim’s final line: “God bless us, everyone”.