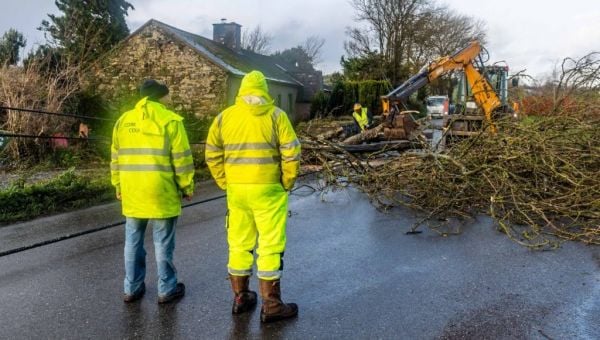 Schools across the country will remain closed on Wednesday, as counties continue to feel the impact of Storm Barra.

Weather warnings remain in place in parts of the country, after thousands of people were left without power as wind and rain battered many coastal areas for hours on Tuesday.

Dublin has now been upgraded to Status Orange. As referenced in our earlier statement all schools in Status Orange and Red areas will remain closed tomorrow 8th December. #StormBarra https://t.co/MLUipWjqNA

The Department of Education confirmed on Tuesday evening that any school which had been included in a red or orange alert area at that point should remain closed on Wednesday.

As #StormBarra gradually clears towards the UK, winds will continue to ease across southern areas.

The same advice has been issued to universities, colleges and third-level institutions, as well as childcare facilities and creches.

Dublin was also a late addition to the list of school closures, after a fresh orange wind warning was issued, starting from 1am on Wednesday and lasting until 7am.

Apologies to 38K customers without power. We are restoring power where possible, weather conditions continue to make it difficult, so unfortunately many will remain without supply overnight. Estimated Restoration times  on  https://t.co/hWag1LtpfF. https://t.co/TX6XAc0NyW pic.twitter.com/irFkX6cgr1

However, the ESB said workers continued their efforts to restore power to impacted homes and businesses where it was safe to do so last night, with work in other areas resuming at first light on Wednesday.

Speaking to RTÉ Radio on Wednesday morning, Brian Tapley from ESB Networks said they are hoping to restore power to the majority of people today, but warned some repairs will take more time. Mr Tapley added that members of the public can visit powercheck.ie to see an estimated time as to when their power should be restored, or they can report a fault on the website if one has not already been registered for their area.

While officials and businesses have started assessing the damage from the storm, Met Éireann has said winds will not fully abate until later today.

Donegal is the only county which remains under a status orange warning, lasting until 2pm on Wednesday at which time it will move to a yellow warning until 5pm.