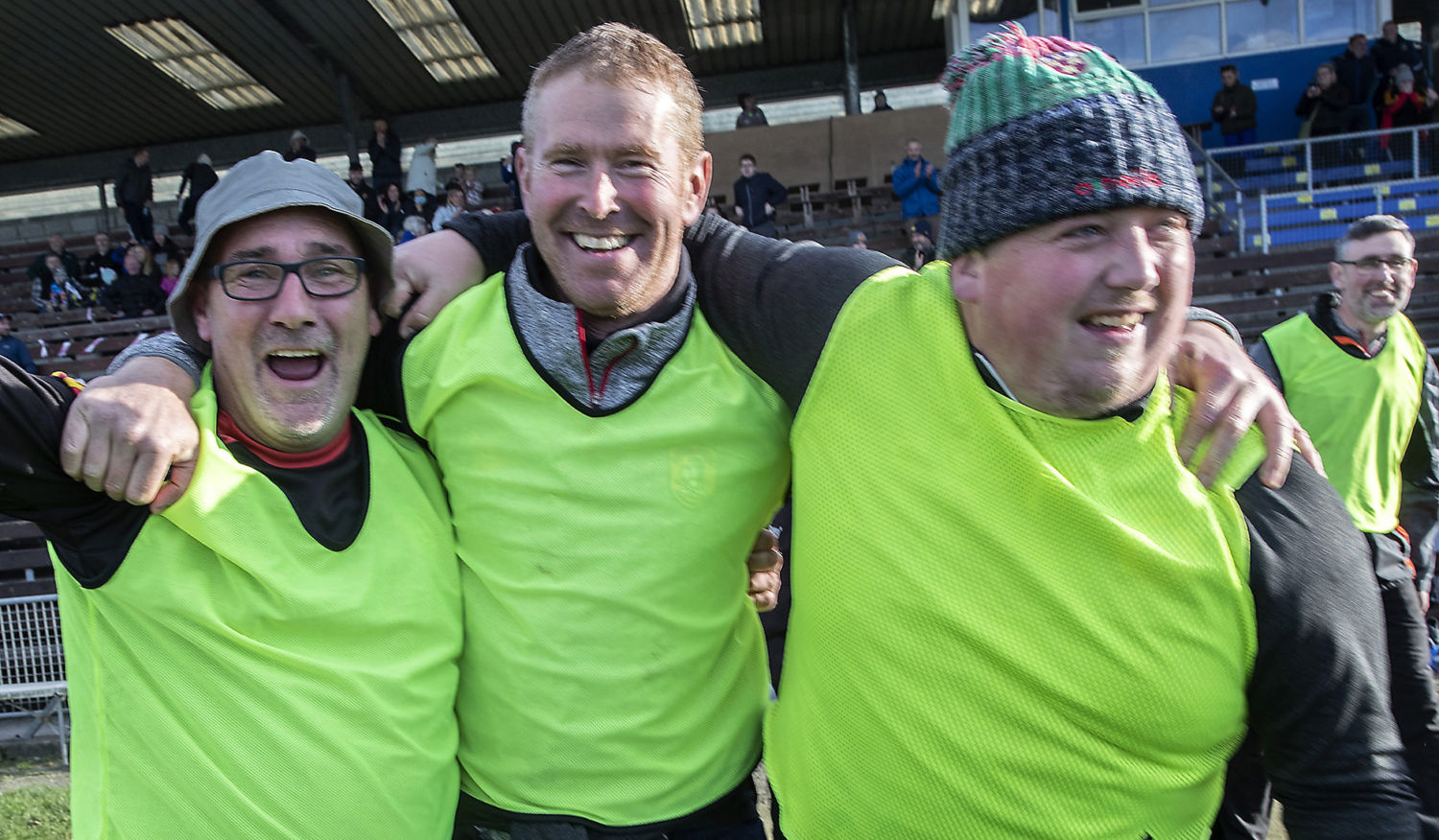 Happy Dunhill mentors following the final whistle after their County Final win over An Rinn. They will now be eyeing a Munster Final appearance if they can overcome the Kerry senior champions on Sunday. Photo: Sean Byrne.

With all of the Waterford sides drawn away in the opening rounds of the Munster Club championships Dunhill would have expected a home game in their semi-final against Kerry senior champions Kilmoyley but Munster Council in their wisdom decided otherwise.
Like Dunhill, Kilmoyley, in their first round tie made the long journey to Templetouhy to face the Tipperary champions and came away with a resounding victory. It may have been that neither club relished another long haul by tossing for a home venue but it was decided that the game would take place in Pairc Ui Rinn with a 1.30 start on Sunday.
When this championship was last played in 2079 Kerry champions Causeway were visitors to Dungarvan to play Ballysaggert and after a hard fought game the Waterford side prevailed on a score of 2-14 to 0-15.
Despite their senior champions being allowed to play Intermediate in Munster Kerry teams have not fared particularly well with Kilmoyley being the only team to have recorded a victory in recent years, that being in 2016 when they beat Monaleen of Limerick before going on to lose to Lismore in the Munster final played in Mallow.
The last meeting of Waterford and Kerry sides in this grade was in 2019 with Ballysaggart scoring a hard earned 2-14 to 0-15 win over Causeway.
Kilmoyley were very impressive winners over Tipperary side Moyne-Templetouhy last week and with a number of Kerry seniors such as Maurice O’Connor, Daniel Collins and David McCarthy involved they are an experienced outfit with as many as nine of their 2016 side contributing against Moyne-Templetouhy.
Kilmoyley are one of the traditionally strong Kerry hurling clubs. They take their hurling seriously as can be seen from the inclusion in their list of recent managers of such high profile men like Anthony Daly and most recently John Myler.

DUNHILL WILL RELISH THE CHALLENGE
Dunhill certainly face a more difficult task here than they did in Clare but they will relish the challenge. They toughed it out against fancied Clare champions Smith O’Briens and players such as Micheal Harney, Eamonn Murphy and Shane Casey can more than hold their own in any company. This year the team has improved with every game and they came through the Waterford championship in impressive style with players like goalkeeper Donal Carey, team captain Davin Phelan and Conor Quinn emerging as quality players.
Waterford teams have competed strongly in this championship with Cappoquin and Lismore having taken the Munster title in the past decade. Dunhill will be seeking to follow in their footsteps by reaching the final on Sunday next.