Time out with Timmy: To your very good health 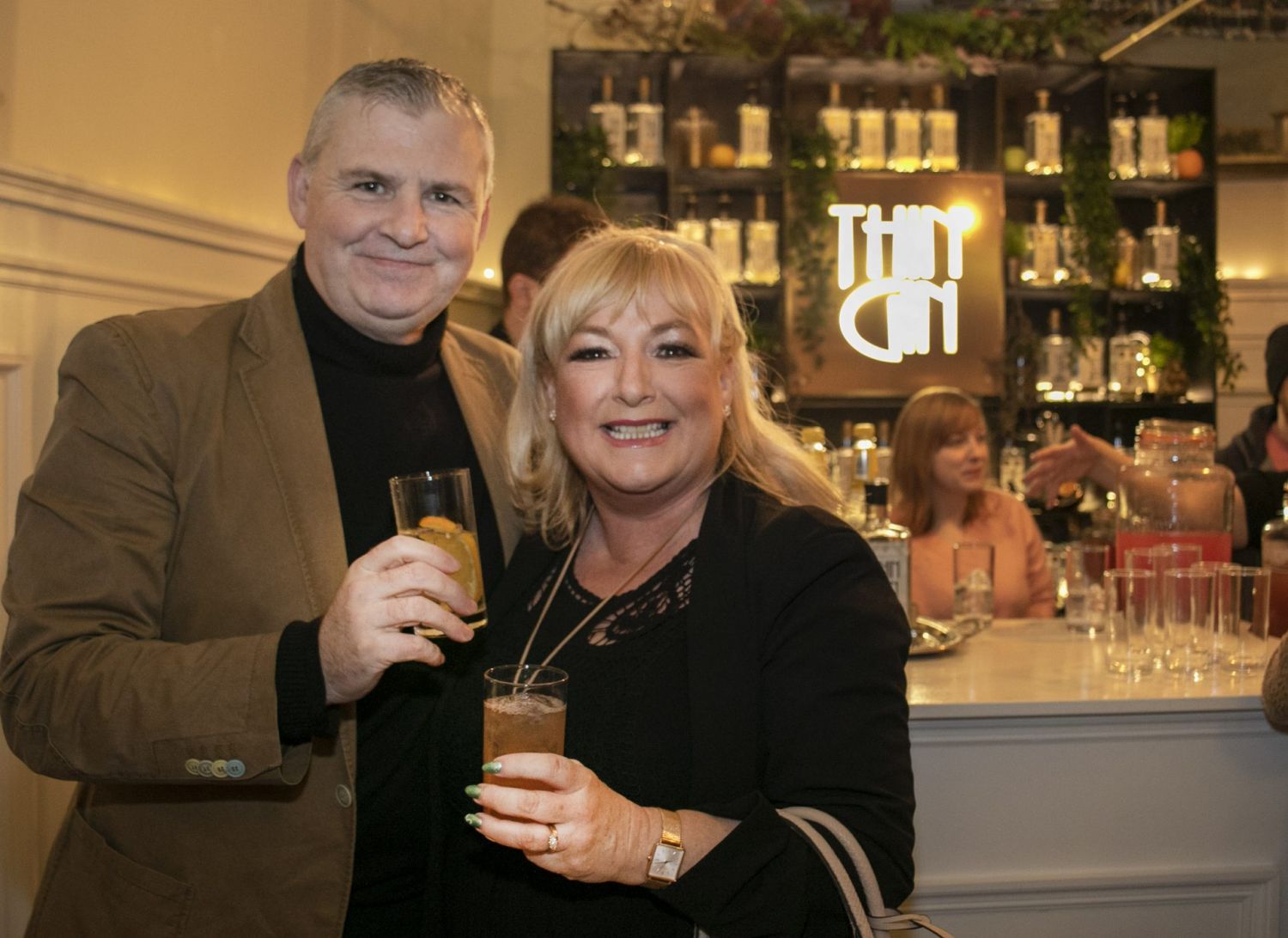 Timmy Ryan and Brenda Giles, sipping a complimentary Thin Gin thanks to Anchor Spirits, at the Waterford News & Star Green Room Awards in the Theatre Royal back in February 2020 when times were then. Photo: Joe Evans

WELL it’s here again. Christmas 2021 has duly arrived. It seems to have sneaked up on us. Inevitably, you’ll hear someone say, “Are you all set for Christmas?” Invariably we answer, “No, I haven’t a thing done!” There you have the nub of what seems to be an annual problem. We just allow the stress to get to us and instead of enjoying the season, we let precious time slip by fussing over details.

This year I’ll be spending my first Christmas since 1982 not travelling somewhere on Christmas Eve. Now based near Dungarvan, I will not have to make the trip from the city as I’ve done for a good part of my life. Even in 1994, I recall coming down from Dublin for the holidays along with all the hassle of sorting stuff before ever heading off at all.

More recently, two years ago I had the mother of all Christmas Eves. Arriving in Dungarvan for lunchtime, I met up with my family at a local restaurant, a little tradition we’ve been enjoying for years. I had been unwell during the previous week and thought I’d shaken it off, but I underestimated my recovery. To make a long story short, I passed out just after the starters. I felt a little funny as I finished my first course, nothing to do with the food, and thought I’d just pop outside for some fresh air. Apparently I didn’t make it that far. I collapsed on the way and was found in a heap at the door of the restaurant having thrown up violently into the bargain. I have no recollection of anything after standing up from the table. The initial response of the restaurant staff was that I was drunk, but even they became very concerned when they realized there was no alcohol involved. I’d barely touched my glass of wine at the table. It was a spectacle to be sure.

Upon coming too and getting a blast of December quay air, I was fine and after a brief check-up at Care Doc, I went home and took it easy over the festivities. The strangest thing still to me is that I actually passed out at all. Not something I’ve ever done.

In hindsight, I know I had not been looking after myself as well as I should have on the run up to Christmas and although some people now suggest it’s possible I had Covid at the time as it was December 2019, I believe it was just a right old dose of flu brought on by poor lifestyle choices, zero hand sanitizing (who did it back then?) and a low immune system that had just had enough. The ghastly cough mixture my significant other prescribed didn’t help either. Needless to say, it was a slightly different holiday experience but it could have been a heck of a lot worse and after a couple of days in bed, I was fine.

The point of telling this horrid tale is that I accept that I brought it on myself. Had I been a bit more sensible and realized I wasn’t 22 anymore, I might have avoided the hammering my body took unnecessarily in the run up. I have finally cracked it, the trick to this festive season lark is moderation, plain and simple. It took a while but I got there in the end.

No one forces us to go out as much as some do, pandemic or otherwise. Even a virus or variant thereof doesn’t seem to phase some folk and they wonder why they reap the whirlwind.

The house will again be full of food and other “goodies” over the season and it’s very difficult to show suitable restraint. It’s only once a year and all. This year I have an ally though. It’s called a habit and for the first festive period I can recall, I’m going in to it feeling good and ready to resist overdoing the treats.

Since August 9, I’ve been back walking regularly and have missed only a handful of days. My walking the woods is my time and I think I’ve become so used to it I’d really miss it now if I didn’t get out. My appetite is good but I don’t crave the sweet stuff anywhere near as much as I did before I started the walking. I’ve even dropped a few pounds and as it wasn’t the goal it’s been a great surprise.

Bear in mind, it’s over 10 years since I ran a 10k. How easy it is to just let the time pass by and lose the desire to go for even a quick run around the block. Laziness is so easy to slip in to.

I like a drink as much as the next guy but even that has naturally levelled off somewhat. Someone said to me you won’t want to stuff your face as much when you get regular exercise. I have to say in my experience, they were spot on. There’s no effort involved it just happens naturally. I have not given anything up and I’m not on any silly diet and have no intention of doing so.

I think I finally know myself well enough to be aware that I just respond much better when I have what I want every now and then. Deny the system and it just might get cranky. In fact I guarantee it. Back to that wonderful word moderation again. Oh, what a joy to tuck in to a yummy Christmas dinner. I’m a sucker for all the trimmings, always have been since I was a kid. Don’t skimp on the gravy and load those roast potatoes on the plate. Heaven.

As for a tipple, again, just pour me a big glass of wine or a cocktail. Keep your non-alcoholic alternatives, it’s Christmas. Tis the season and, anyway, if I have a woolly head in the morning, I’m not going anywhere, I’ll allow the body time to catch up. He’s earned it. It’s like there’s a little guy in my brain now gently reminding me that I’ll feel a whole lot happier tomorrow if I stop at just enough vino as opposed to going over my limit.

To you and yours, I hope you get to savour the season and may it be a peaceful one for you. It’ll go all too quickly. Limit the stress as much as you can and get out and enjoy a nice walk. You won’t know yourself. You actually can have your cake and eat it. Happy Christmas and God Bless.