Christmas 1996: When walls fell and the lights went out 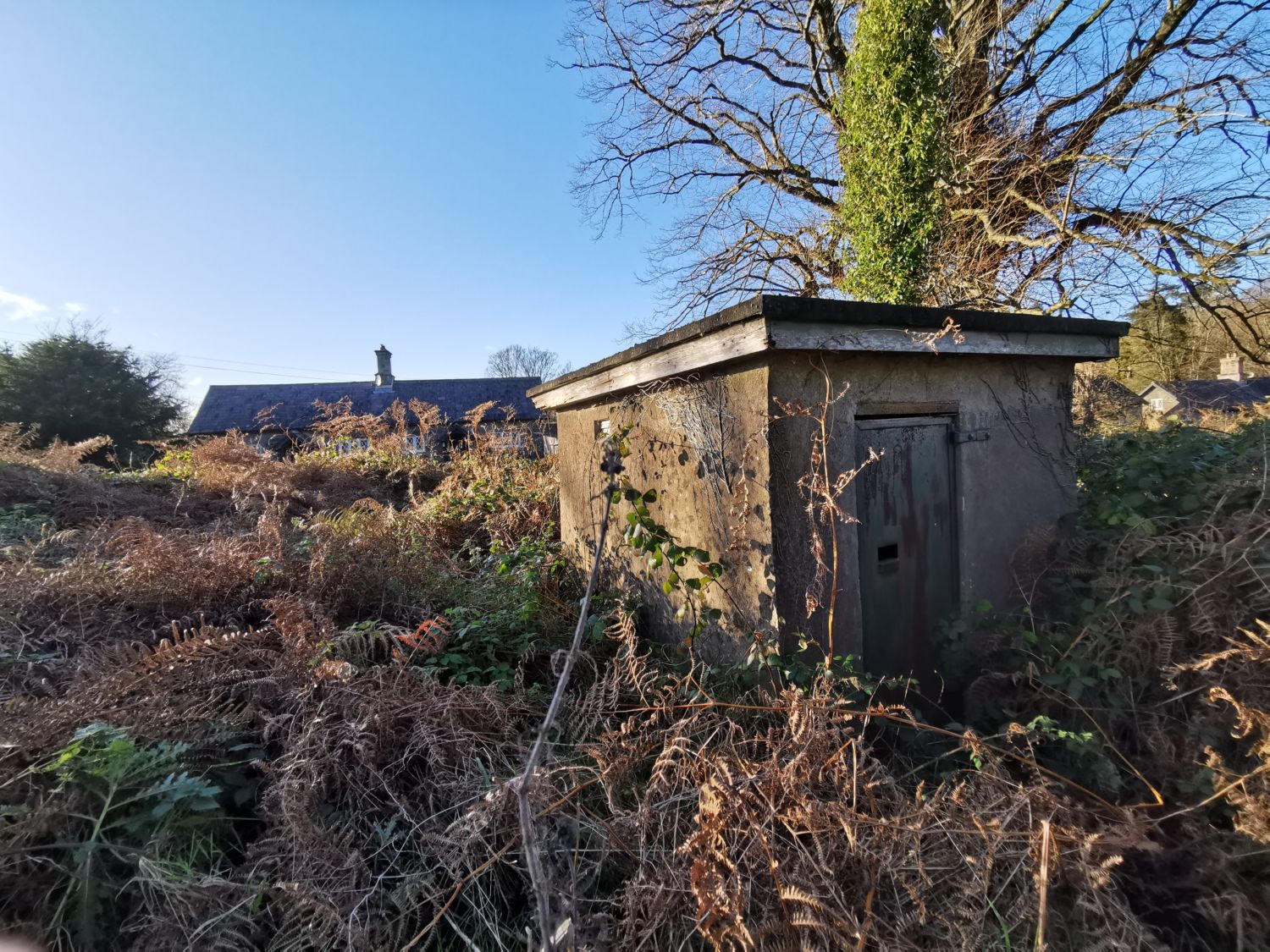 The pumphouse servicing Sallyhene Cottages, which neighbour Paddy Delaney (RIP) and I linked arms to reach and re-engage during the Christmas Day storm of 1996.

CHRISTMAS MORNING 1996. It’s a damp and windy start to December 25th between Curraghmore’s vast Sheep Walk and the expanses of the Guilcagh Field.

We’re only two and a half miles from Portlaw but on that particular day we might as well have been on the Sea of Tranquility trying to make contact with Mission Control.

I pull the blinds in the bedroom I share with my brother to see the conifers behind the Curraghmore Wall swaying like a pine needled chorus line with the natives towering over them dancing a little too lively for my liking. There’s a storm brewing outside but there are still chores that need doing before we head to Portlaw for Mass at 11 o’clock.

Even now, considering the events of that particular Christmas a quarter century ago, I can readily recall my 17-year-old iteration thinking that this was going to be a Festive season unlike any other.

As any country kid will tell you, the jobs you’re asked to do pretty much every day of the year still need doing on Christmas Day. In my case, the kennels housing my Dad’s dogs needed cleaning just like they did on any other day.

Our group of Labradors and Springer Spaniels then numbered in the high teens so use your imagination when it comes to how long it took to clean them, disinfect them (Jeyes Fluid being our particular cleaning choice) and feed them. It was a great deal of work, work I mostly didn’t mind doing but boy, there were some days when I really didn’t feel like it. But my feelings didn’t come into it. The dogs still needed looking after.

So I layered up, stuck on my wellies and trudged out into the wilds of the morning. The wind still only felt like it was picking up by then and the dogs, thankfully, didn’t seem too perturbed by the elements.

I could hear dogs wailing a few miles away but, as I do now in my early 40s, such a soundtrack has been a near permanent backdrop to the time I’ve spent at the Keyes homestead as boy and man. The wind carried the wailing barks a little stronger than usual as I made my way through each kennel, shoveling, scooping and scrubbing. There was turkey and stuffing to look forward to, as well as the remainder of my Selection Box.

I pat Grouse, the friendliest of Labradors, before I emerge from his kennel and bolt his door closed – but I don’t lock up the kennels as they’ll be fed later – it’s one of the best days of the year from a scraps perspective, after all. I wash off the shovel, put the scrub back in the shed and then peel off my work fatigues at the back porch.

With the clock firmly ticking for Mass, I make for my room and put on my Christmas best. As I button my shirt, I hear something outside before I observe the end result with my eyes wide open.

The sound of something slowly breaking is followed by my catching sight of a bough breaking off one of the Curraghmore trees protruding over our garden wall. It careers against the gate of Grouse’s kennel – right where I’d been standing five or six minutes previously – and before I know it, the shirt’s back off and I stick back on my grubby gear.

My one and only concern is for Grouse. I pull back on my wellies as quickly as I can and take a look overhead before attempting to move the bough, which is no more than seven feet long. With nothing to suggest anything else is about to fall, I pull it clear of the kennel. It’s left quite a dinge in the door of Grouse’s little home – it still opens and shuts – but thankfully and most importantly of all, the dog is completely fine. I give him a rub and clear away the few bits that have broken off the bough and fallen into his run.

I don’t dwell on it too much there and then, but it later occurs to me that this was the second time in just over a year where I’d just avoided a nasty scrape.

About 30 feet from where that bough fell, in October 1995, I’d just put another dog back into one of the new kennels my Dad had built when a section of the Curraghmore Wall directly opposite it came crashing down into the kennel. In my room at the time, it felt like a bomb had exploded.

Again, the dog was thankfully fine as the kennel’s metal frame constructed by Dad did its job in stymieing its destructive force. It reduced the front of the kennel to a mangled mess but we all later agreed it was better, even if my Dad was justly frustrated to see his work, as he put it “all in shit”. 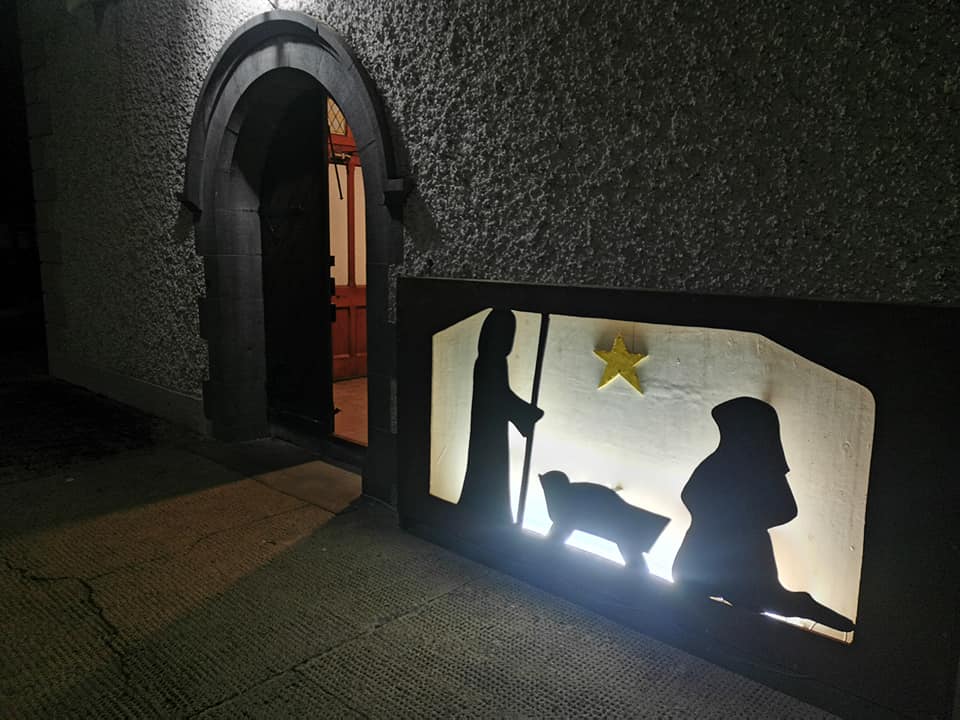 The outdoor crib at Grangemockler. My paternal Great Grandparents are buried in the adjoining cemetery.

Now, I’ve never been the superstitious type even though I’ve always consciously avoided walking under ladders but twice in the space of 14 months, a matter of minutes had separated me from a serious injury twice over. Maybe I’m luckier than I ever realised.

Anyway, while the wind continued to pick up, most of us loaded into the car for Mass. We got back home after a quick call into our Grandparents in Brown Street – sure we’d surely be seeing them again later – as the gale continued to whip up.

There were a few loose items darting around the front yard like pinballs and, by then, things felt a little uneasy. By the early afternoon, when the turkey and ham should have been almost cooked, the electricity was cutting in and out.

The day now carried a ‘Batteries Not Included’ quality to it and none of us were best pleased by this potential development. And while we were still a far cry from the scenes associated with the American Midwest during tornado season, there have been few days in my life when the wind sounded angrier.

Less than 200 yards down the road stand the beautiful Sallyhene Cottages, mostly home to retired Curraghmore Estate employees during my childhood. We had to make sure our neighbours were alright so off I set, on a walk I’d done hundreds of times previously – but never like this. A brief ramble had turned into a round of The Krypton Factor.

With the wind thundering to my back, I was struggling to remain upright as the ash trees in the Grove to my right clattered off each other like over-exuberant hurlers awaiting the throw-in. Firstly, I checked in with Nora Walsh, who always wore a smile warmer than any fireplace, wishing her a happy Christmas. She was amply stocked with coal and firewood and the open hearth would serve her well until bed called.

Christmas Day was also the only day of the year in which Nora ever enjoyed a tipple. She raised a glass of Buckfast while I nibbled on a few Season’s Greetings before we bade each other farewell.

I then popped in next door to Maggie and Paddy Delaney to see how they were. Maggie, who spoke of the weather with an interest and regularity that most in Met Éireann would struggle to emulate, asked if I’d check the pump across the road.

“Of course I will,” I replied, with Paddy insisting I shouldn’t do it on my own. So out we both went, a teenager linking a man in his late 70s with hands like shovels, on what on any other day was a short stroll to the pumphouse in the field across the road. The wind had, incredibly, grown even more ferocious in just a few minutes and I doubt if either of us could have remained upright were we standing apart. Paddy opened the pumphouse door and I pressed the big green notch – similar to our own pump at home – so at least that was okay for now.

We took our time getting back indoors and I said I’d give it a few minutes before I headed back up the road and home. In the meantime, Maggie ushered me to the drawer where she kept a seemingly never ending supply of Dairy Milks and Emeralds (I went for the Dairy Milk) before telling us not to be fretting too much about them – they’d keep tabs on Nora too if candles were needed later on. The same went for Mick Donnelly in the cottage closest the Curraghmore Gate. They always looked out for each other, all four of them – and we were so lucky to have them as neighbours for as long as we did.

By the mid-afternoon, as the wind continued to bellow, the electricity supply gave up the ghost. This was to be the Christmas Day with no Christmas dinner.

My Dad (and one or two of my siblings) went down to Curraghmore to make sure everything was okay with Granny Keyes as the day’s routine was uprooted like many of the trees on the Clonegam road that day, breaching the estate wall in over a half dozen places on as destructive a day as we’d ever known growing up.

Mam took out the gas range cooker to tide us over foodwise, doing her usual loaves and fishes magic, with sandwiches and fizzy drink also flowing while we sat on the kitchen floor, the room illuminated by candles. My sister produced her guitar and we all sang songs, making the most of a day and night that had inflicted much damage to trees, walls and power lines – but we were all indoors, we were all safe and we were all together. 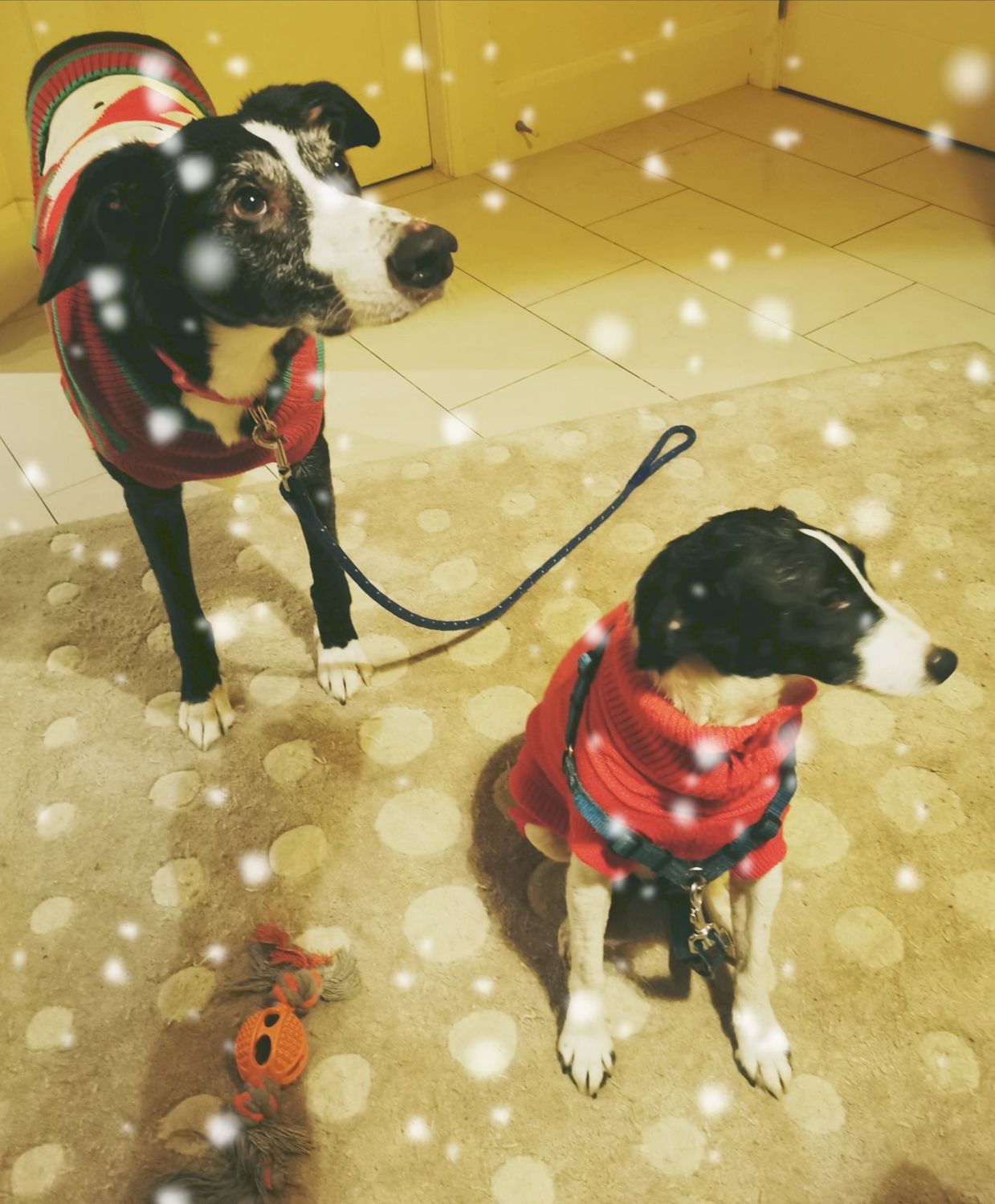 The dogs of Christmas present: Zippy and Buddy getting all seasonal!

Christmas Dinner would have to wait until St Stephen’s Day and by the time we were all happily eating, our house was as full as our stomachs with our three Grandparents joining us.

As was always the case, we thought of our Grandad Keyes who had died on Christmas Day 1988 and tough and all as it was to not have him there, I’ve always felt glad that I got to know him. The Good Shepherd. Granny Keyes died the following Easter Monday. They both left a deep and permanent mark, as did my O’Hara Grandparents. What a privilege to have known and loved them all.

I’ll be walking the dogs again this Christmas morning, a lifetime habit that, as I grow older and greyer, I’m glad I never really shook off properly. My Grandad’s habit. My Dad’s habit. And now mine.

I’ll have laid wreaths at the family plots in Kilcash and Grangemockler the previous evening, a task my Dad saw to for so many years, something I’m proud to do now. It’s the least I can do for him.

And I’ll also head to West Waterford to remember a good friend of mine taken all too soon, someone whose memory I didn’t think I’d have to honour for a great many years yet. Another unexpected storm, albeit one which has taken a great deal longer to abate than the great tempest of 1996.

And on the quieter moments of this particular Christmas Day, I’ll raise a glass to all of them while hoping for calmer skies in the year ahead. For all of us. “And to all a good night…”