A Christmas fowl up 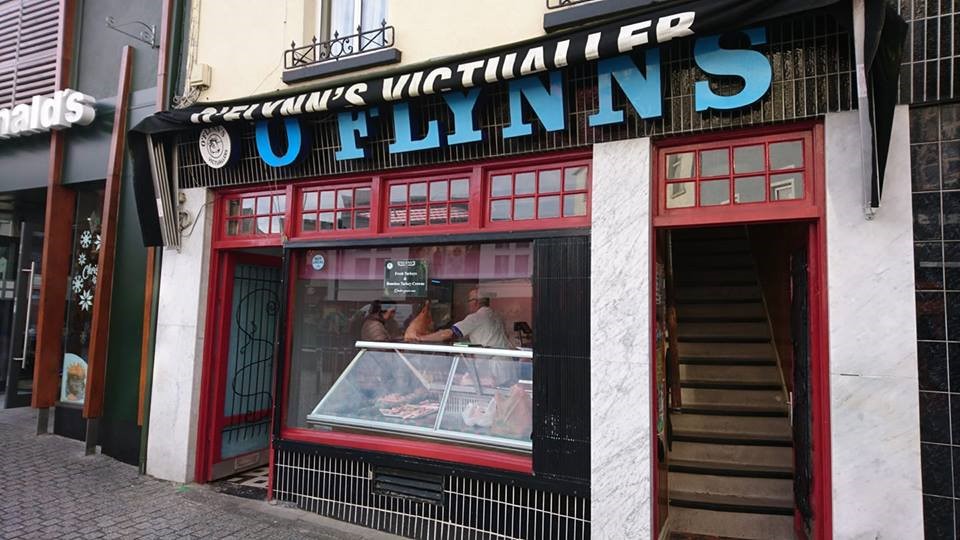 ‘O’Flynn’s, of course, was also well-known to the young Doherty’s. My mother had a countrywoman’s habit of going to different butchers for different cuts of meat’

IT was Christmas eve morning 1985. Home, a small council house in the Mount Avenue, Cheekpoint, a mad house. Our father and mother, Bob and Mary Doherty looked on with mild amusement as we readied ourselves for a trip to town.  Young adults with thoughts of friends, drinks and a few last minute presents.  My brother Robert and I were to head in on the Suir Way bus, our sisters, Kathleen and Eileen, had other transport arrangements.  Our baby brother Chris ran amongst us, caught up in the excitement, on top of his little world as he had already opened his birthday presents that morning, and could look forward to many more the next day.  As Robert and I headed out the door, our mother called after us to remind us to collect the turkey.  As it was the umpteenth reminder we waved her away as we headed up the Avenue, to await the bus at Elliott’s corner.

The morning was dry, mild but cloudy and we were dressed in our best; runners, Levis jeans and sports tops.  The plan was simple, alight the bus outside Kelly’s on the Quay, stroll around for the gifts, maybe meet the lads for a few pints and get home again on the 3 o’clock bus if possible and ready ourselves for the long night ahead. The plan worked to perfection until Robert bumped into some mates from the place he worked, AIPB in Christendom.  They dragged him away for a pint in Egan’s, leaving me to my own devices around the town.

‘All those Robert met over Christmas wanted to hear the story from the horse’s mouth and from The Jolly Sailor, the Suir Inn, Jack Meade’s and into town the story grew legs and his infamy grew’

At 2.30 I was standing outside Phelan’s Butchers in George’s St, waiting on Robert to arrive.  As mobile phones were decades away I had little choice but either wait patiently or walk the town in search of him.  Standing there the evening became darker, a drizzle started to fall and the lights and decorations that lit up the street gave a golden glow to the last minute shoppers struggling by with bags from the likes of Darrers, Mr Hipps or Mork from Ork!

10 minutes later I gave up waiting, and perceiving a lull in the activity I pushed in the door and joined the queue.  I never liked the smell of the butchers I have to admit and in those days when much of the butchering was done on the premises the smell was more intense.  Sawdust was strewn across the floor and behind the counter a large timber cutting block, immaculately clean on the day, was often the scene of pigs being cleaved apart as we stood on the floor as children with my mother.  On this occasion the shop was a scene of organised chaos as a well-oiled machine of a family run business processed pre-orders with a military precision.

The counter ran from the right of the shop around in an L shape. A gap allowed for access and egress to the shop floor. A glass front allowed visibility of all the wares and meat hooks hung down from the ceiling, bare today, but regularly holding up sides of beef or pig, heads and all.  Tom Phelan himself was the master of operations and he greeted his customers with a familiarity and fondness that seemed genuine and heartfelt.

I didn’t even have to open my mouth, for once my turn came the call went out for Mr Doherty’s Turkey, which was handed over the counter and with a Happy Christmas from the man himself I was on my way.

Boarding the bus down on the quay, I searched in vain for Robert and presumed he had made his own way home.  But once I got there he was nowhere in sight.  I left for my grandmother’s not long after, leaving my mother busy with the preparations, my brother Chris lying on the couch with my father watching TV.

All seemed well in the world, but what I didn’t realise was that while I was strolling for the bus with the turkey in my fist, Robert realising the time, had burst out of the pub and headed for the turkey himself. Running up Barronstrand Street he crossed over to George’s St, into O’Flynn’s butchers and joined the surge of customers inside.  He searched in vain for me, and in his mind he guessed I had hit the town and forgotten all about the errand.

O’Flynn’s, of course, was also well-known to the young Doherty’s.  My mother had a countrywoman’s habit of going to different butchers for different cuts of meat.  One week it would be O’Flynn’s for the ham, chucks or skirt, Phelan’s for the tripe, sausages, etc.  The following week she might switch shops and although there was undoubtedly a method to it, we could never grasp it.

So when Robert’s turn finally came in O’Flynn’s he too was recognised.  But on asking for his mother’s turkey rather than eliciting an instant command it created a bit of a stir.  Now of course this only created confusion in Robert and a fair bit of panic.  Where in the hell was the turkey, and how could he go home without it.  The fact that he was six foot four inches and almost as broad across the chest as the proverbial bus perhaps played a part.  They didn’t call him Rambo for nothing or give him a job bouncing on the door of the Ardree disco at 17 either! There again it might also have been the queue of customers backing out the door.  But certainly his earnestness in thinking that our mother had ordered and paid for a turkey and that he was supposed to bring it home could not be questioned by the staff in the shop.  Relenting, a turkey was found and handed over and Robert left the shop, contented that he had saved Christmas.  Realising he had missed the 3 o’clock bus he went back to the pub.

Meanwhile, I was relaxing in my grandmother’s, reflecting on what had been a good day so far; I had the presents I needed, the turkey I delivered was being prepped for the Christmas day dinner and now I could look forward to a good night out in the local pub, Tynan’s Jolly Sailor.  Returning to my mother’s at about 7pm I walked in on a very different scene.  The calm and peace I had left was now in tatters.  My mother was furious, my father had gone to the pub and Chris had retired to the safety of the girls’ room, who had returned from town with Robert on the 6pm bus.

My mother, the most calm and good natured woman in Cheekpoint, had almost fainted when Robert had walked through the door.  On hearing his account she had rushed out without a word.  She had run to the Cross Roads, where from the phone box she had tried unsuccessfully to ring the shop to apologise for the mistake.  The O’Flynn’s had closed and now my mother was custodian over a turkey that she could ill afford, did not need and couldn’t fit in her tiny freezer.

Robert and myself decided to make ourselves scarce as we couldn’t stop laughing.  When we got to the pub Robert got a great cheer, my father had already put a spin on the story and the way he had told it made it sound like Robert had jumped through the window with the bird under his arm.  The gauntlet had to be run of course.  First was my father’s mates, fishermen and sailors alike; Robert Ferguson, Martin Mahon, Paddy Duffin, Tom Sullivan, Charlie ‘wag’ Duffin and Ned Heffernan.  The story had to be told, with my father’s interjections, and they roared with laughter as the scenes unfolded.  Next was our own mates stuck in the far corner, Mossy Moran, Paul Duffin, Neil Elliott, Ger Doherty, Michael Duffin, all shouting at once, laughing and blackguarding.  As each new group came into the pub the story was told and retold.

To waste good food was a sin

Visitors to the house on Christmas morning had already heard the account and their questions and reactions put a smile on our mother’s face and lightened her mood.  All those Robert met over Christmas wanted to hear the story from the horse’s mouth and from The Jolly Sailor, the Suir Inn, Jack Meade’s and into town the story grew legs and his infamy grew.

Our mother eventually decided that she would have to cook the second turkey, for it wouldn’t keep and to waste good food was a sin in her eyes.

Her biggest fear of course was that it was someone else’s turkey and that their Christmas was ruined, and try as she might that thought dwelt at the back of her mind that whole Christmas. The first opportunity she got to get into town, she was away to O’Flynn’s with her purse and her apologies.  Bernard O’Flynn at least managed to put her mind at rest about another family’s Christmas being ruined, as he had several on reserve and no one went hungry. It was as if Christ himself had answered her prayers and she was a much less troubled woman when she finally arrived home.  But from that year on neither Robert nor I were ever asked to get the turkey again.

Andrew Doherty blogs regularly about Waterford’s maritime heritage at www.tidesandtals.ie, and is the author of a number of books, including, ‘Before the Tide Went Out’