Déise smuggling in a time of empire 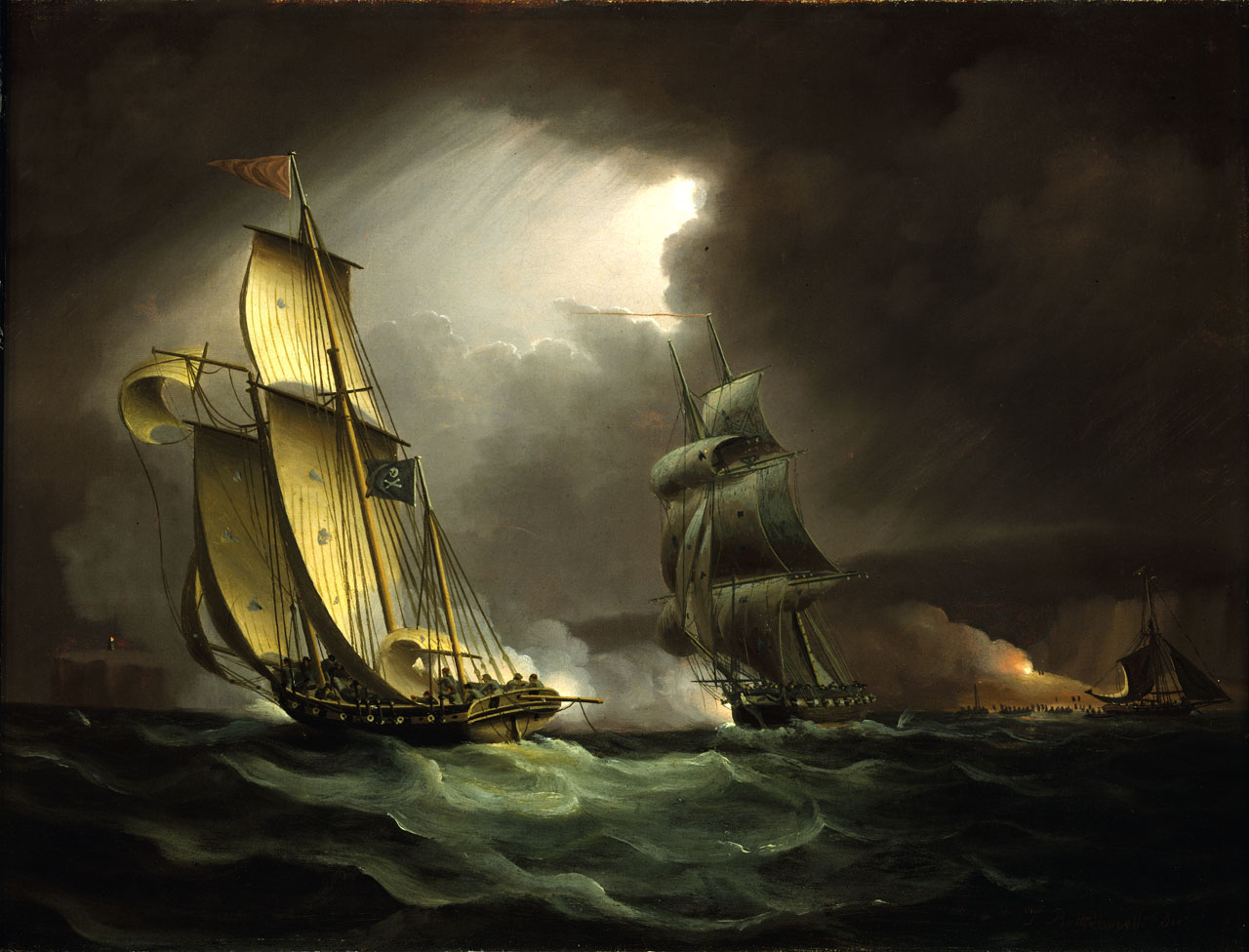 ON April 15, 1824, a ship was sold at auction at the Old Custom House Quay in Waterford. What made the sale of this sloop unusual was the seller, the Revenue Service.

Revenue had seized the aptly named smuggler “The Active” and she was to be sold for running contraband into Ireland. However, these Revenue sales were often not the end of a ship’s smuggling career, one smuggling lugger, the L’Aloutte, was sold at auction on three separate occasions, her owners buying her back each time.

When people think of smuggling the Kentish coast and stories such as Jamaica Inn by Daphne du Maurier come to mind. However, in the 18th and 19th century smuggling was rife along Ireland’s rugged coastline with somewhere between 30-50% of some goods (such as tobacco) being brought into the country illegally.

I have always had an interest in history and several years ago I happened to read an obscure report by Revenue to the British Parliament from 1824. It detailed the establishment of the Coastguard whose primary role was to combat smuggling. The report explained that the only place in Ireland where the Coastguard encountered difficulty establishing a presence in Ireland was Ballymacaw, Co Waterford. My interest was piqued when I read that smuggling was occurring here at “an unprecedented and unbelievable scale”. The report went on to mention that every available house in the area was under the control of local smugglers and no house was available to rent while they built a coastguard station. The Coastguard had to resort to anchoring a ship off Ballymacaw bay while construction of a station could take place. From reading these reports and examining old newspaper reports it quickly became obvious that smuggling in Ireland had taken place on a similar scale to the English coast.

By their nature researching any criminal activity is difficult. Smugglers don’t tend to keep diaries and there is little existing physical evidence of this trade. The records of organisations such as the Coastguard are invaluable and in some areas the smuggling history has slipped into local folklore. This can be seen along the Waterford Coast with placenames such as Pól an Tábac and Pól an Airgid (the tobacco cliff and the money cliff ) being found along the Waterford Coast harking back to the days of smuggling. Of course every coastal community has legends about smuggling and a nugget of truth is often found in these local stories.

As a colony smuggling in Ireland was directly linked to the economic policies of empire. In the 17th Century in a bid to protect and boost the home woollen market the English government passed the Woollen Acts, a series of laws that served to increase tariffs on Irish and French wool imported into England. These acts even included a clause that every Englishman buried had to use an English woollen shroud (the only exception was for plague victims who could use Irish wool). These acts caused an explosion in wool smuggling from Ireland and France into England. These unintended consequences were repeated with the passing of the Salt Acts which drastically increased the price of salt in England. Overnight the men of the Cornish & Kentish fishing fleets were reduced to penury as they couldn’t preserve their catch and the fishermen were left with little option but to join the smuggling trade.

In Ireland one of the first written mentions of smuggling dates from 1677 when James Butler, the Lord Lieutenant of Ireland, issued a decree ordering boats at Waterford to be searched “as considerable quantities of wool have been fraudulently exported out of this kingdom from obscure places under false package”. The difficulty, however, with smuggling commodities such as wool is their size to value ratio. However, this problem would soon change as taxation shifted away from bulky commodities towards consumer goods.

Throughout the 18th and 19th Century England and Great Britain found itself more or less constantly at war and these wars were funded by vastly increased taxes on luxury goods such as tobacco and spirits.

In his report to parliament in 1824 Sir James Dombrain explained how large scale smuggling runs worked. He had visited a shop in Annestown, Co Waterford, and purchased a ticket for an upcoming run. Dombrain was shocked with the brazenness of the operation, the system of tickets entitled the purchaser to a half bale of tobacco when the ticket was shown on the beach on the night the tobacco was landed.

The money for the run would be gathered in advance and sent to an agent based abroad who purchased the cargo and contracted the smugglers. Hundreds of people would turn out from the community to collect their share of the cargo which would be unloaded by hand, this community based system guaranteed secrecy and security. If Revenue tried to intercept a consignment they were often violently resisted as the seizure could reduce a whole community to poverty.

Dombrain remarked in his report that in the weeks coming up to a smuggling run every spare piece of cash for miles around could be drained from the local economy.

From the late 18th and into the early 19th century smuggling was at its peak in Ireland, tobacco and spirits were perfect cargo, small, light and valuable . The profits involved were enormous, a modest sized smuggling sloop with a cargo of tobacco could expect to make a profit of €300,000 in today’s money.

So where was the contraband coming from? As mentioned in the early days commodities like salt and wool were smuggled out of Ireland. From this the smugglers developed international contacts and when the focus of taxation shifted towards luxury goods they were in a prime position to start smuggling goods into Ireland. The source of these goods changed over time.

The Isle of Man was a hotspot until 1765 when the smuggling was ceased by the English government buying the island. But the smugglers just shifted their operations elsewhere with Guernsey and Flushing in Holland being other preferred ports.

At the upper end of the market the smugglers were respectable business men who purchased their cargos in bulk perfectly legally. As there were no laws against smuggling out of a country they feared no prosecution. Where illegality and often violence entered the occasion was when the merchants broke the cargos into smaller cargos and hired captains happy to tangle with the Revenue Men. These smugglers were heavily armed with cannon and muskets and quite prepared to fight it out if chased at sea.

On occasion when these smugglers where captured the names of the crew were very revealing, generally carrying one or two local men who acted as pilots while the rest of the crew would come from their home port. A time and date (often over a few days to allow for weather) would be set and the cargo would be landed. Tobacco was broken down into half bales which a single man could carry and spirits would be shipped in specially made small kegs. Such was the extent of gin smuggling from Holland some of the distilleries there started to make extra strong gin for smuggling. This again increased profits as it could be diluted down.

Large groups of men would turn out to meet the smuggling vessel with the cargo distributed by hand. The people buying the goods saw it as a victimless crime and there was always a certain glamour associated with buying contraband. Smuggling was far from victimless, however, and several Revenue men in Ireland and on the high seas met their deaths at the hands of smuggling gangs.

So what would cause the decline of smuggling? It certainly wasn’t a decrease in consumption of goods such as spirits and tobacco. From 1822 the Coastguard started to establish stations along the Irish coast. The smugglers moved operations until by 1824 the coast was completely covered. There would eventually be 13 coastguard stations just in County Waterford.

Unlike the Revenue men the Coastguard became part of local communities and often crewed the early life boats. This local knowledge proved effective in fighting smuggling and incidents of smuggling started to decline. Simultaneously in Britain Adam Smith’s ideas of a Free Market economy would start to gain popularity and this would eventually lead towards a reduction of tariffs and taxes on goods. This combination of increased vigilance on the Coast and reduced taxes would eventually bring a complete end to the industry of smuggling along the Irish Coast.

As smuggling decreased the role of the Coastguard changed over time towards the lifesaving role people would be familiar with today. Other than local folklore the history of smuggling in Ireland is largely forgotten so the next time you are on the Waterford coast you can imagine armed smugglers slipping ashore in the dead of night to land their illicit cargo to be distributed amongst eager customers.