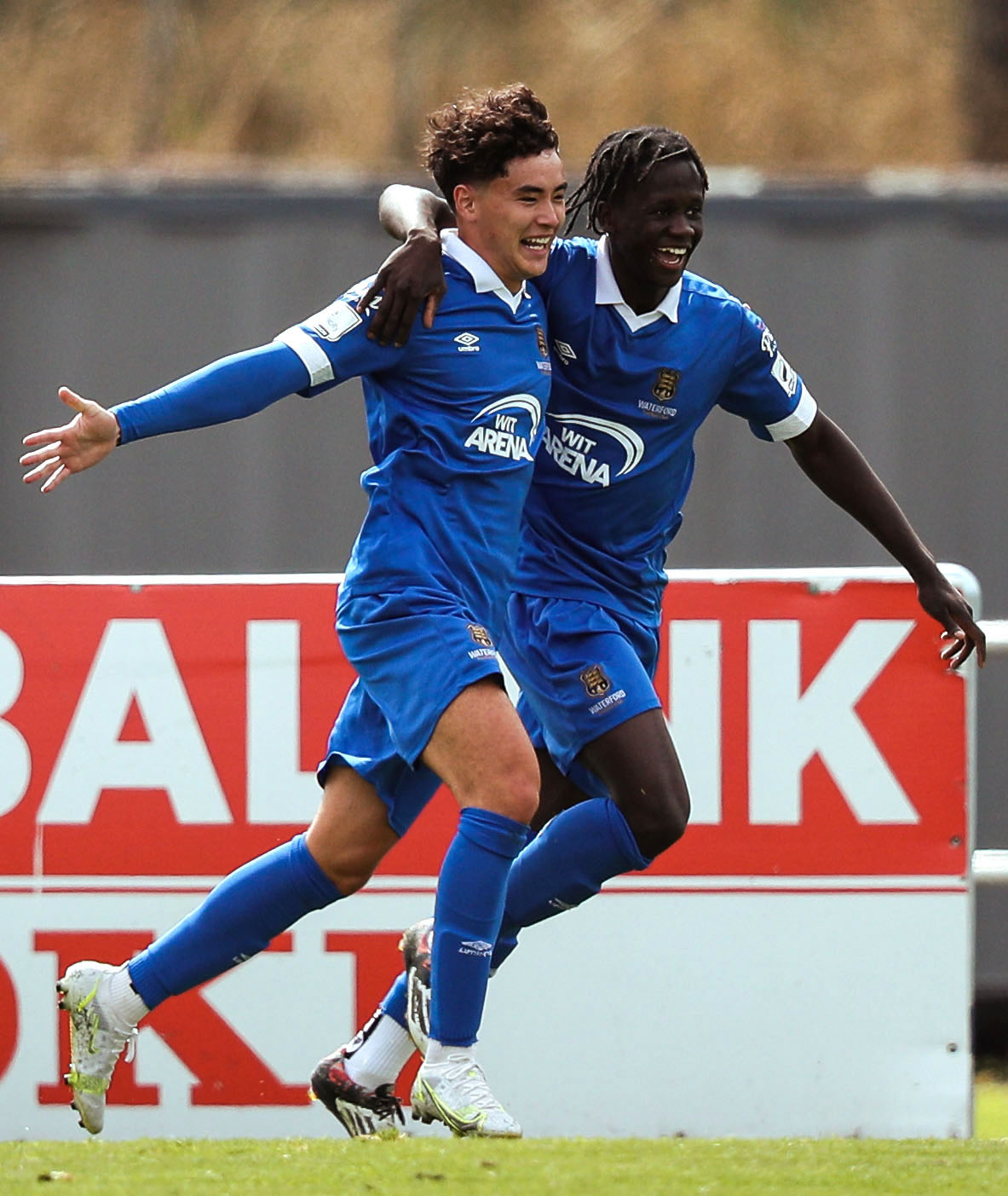 Blues fans will be delighted with the news that two of the stars of the 2021 campaign, Phoenix Patterson and Junior Quitirna are two of the first ten players announced as part of the 2022 Waterford FC squad. Photo: Inpho.

Waterford FC have set down an early marker ahead of the start of the SSE Airtricity First Division season that gets underway on Friday, February 18, with an away trip against Athlone Town with the announcement of eight signings from the last campaign, and two new additions.
After Blues owner Richard Forrest confirmed the arrival of new manager Ian Morris to the club before the Christmas break, some fans, who were getting a bit impatient with no news, were a bit more relaxed with the news that both Phoenix Patterson and Junior Quitirna will be on Suirside for 2022.
The two recruits that joined the club from England in the middle of the 2021 season captured the hearts of the Waterford faithful and the confirmation that both will remain on board for life in the First Division will give the Blues real hope.
After losing John Martin to Dundalk FC before Christmas, the club have secured club captain and local Niall O’Keeffe for the 2022 campaign, whilst Cian Kavanagh will remain at the club for the coming year along with Jeremie Milambo.

NEW FACES
Eddie Nolan has also put pen to paper on a contract for the season ahead and he will be a big player for Ian Morris, whilst George Forrest will also be hoping to make a name for himself in the First Division for the upcoming campaign.
Ronaldo Green, who was brought to Waterford from the Bahamas by ex-boss Marc Bircham, has also been confirmed as a player for the 2022 season, and it’s believed that all these eight players were on 18-month contracts from last year.
There was further good news as the club have since confirmed that two new faces will be donning the Waterford FC jersey this season after manager Ian Morris secured the signatures of both Yassine En-Neyah and former Blue Kilian Cantwell.
En-Neyah, who is a native of Morocco, spent the season half of last season with Shelbourne under Morris after joining the club from Nottingham Forest. The 21-year-old attacker made the move to the City Ground back in 2017, and played in the 2020 FA Cup 3rd round clash with Chelsea.
After playing with the Waterford FC Under 19’s, Kilian Cantwell has made a return to the RSC after signing from Athlone Town where he’ll be hoping to feature against his former club in the season opener on February 18.
The 27-year-old Kilkenny native has also played at both Limerick and Bray Wanderers in recent years, with the experience of playing in the First Division set to be key as the Blues try to get out of the division at the first attempt following relegation in 2021.

MORE TO COME
With further announcements expected in the coming days, there is currently seven players from last season that are currently on the PFAI transfer list that include Kyle Ferguson, Shane Griffin, and Anthony Wordsworth, all who featured in the relegation playoff defeat at the hands of UCD.
Manager Ian Morris has confirmed that the club are “in talks” with some other players that played last season in a bid to agree contract extensions where supporters will be eagerly awaiting news on players such as Brian Murphy, Darragh Power, Shane Griffin, and Jack Stafford in particular.
Commenting on the first of the signings for the 2022 season to WaterfordFC.ie, manager Ian Morris said: “Having these players signed for 2022 is a great start for us and gives us a really good base to build on. They know the club and that’s what we need to get started and be ready for the season start in February.
“We continue to negotiate with a number of last season’s players and expect to announce contract renewals soon. I’m also speaking with a number of players from outside the club to give us lots of options and we hope to announce those shortly.”
The club have also put on record their “thanks for the hard work and commitment to the players who will not remain at the club for next season”.