Shamie Halpin was a leading light in the ‘Glamour Blues’ team 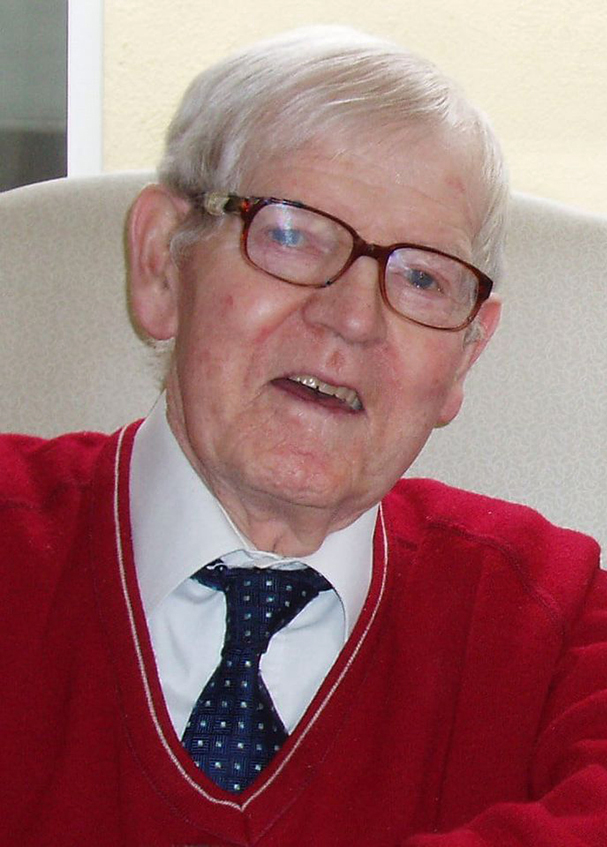 In the 1950s Waterford FC were known as ‘the Glamour Team of Ireland’ and one of leaders of the group was the late Shamie Halpin (pictured above) who passed away over Christmas.
Shamie was a proud son of John and Mary Halpin from High Street in Waterford City. Born in 1933, he had three sisters and was the youngest of six brothers. As a young lad he played football on the streets of Arundel Square, a part of the City that produced some wonderful talented players. Shamie showed great potential and was soon inducted into ‘The Arundel Square Academy’ which was made up of talented young players from the surrounding areas, including the O’Neills, the Coads, the Fitzgeralds, the Hales, the Barrys. Most of these lads would go on to enjoy success with St. Josephs, Hibs and or local clubs.
Shamie Halpin would go on to have a wonderful career with Bohemians FC and Waterford FC. His schoolboy football was played with Arundel Square in the local street Leagues before moving to Bohs to join up with Ben Wadding and Tommy Kavanagh.

EMERGING TALENT
As a schoolboy Shamie Halpin excelled with Bohs and he was top of the list as one to watch as an up and coming young player. In 1951 Jimmy Nelson was appointed player/coach of Waterford FC and he kept a close eye on the progress of Shamie, the same year Shamie was capped at Youth level for the Republic of Ireland. The first game was played at Goodison Park against an England selection and the Irish team was captained by Noel Cantwell.
In the return game Ireland won by two goals to one at Dalymount Park with Shamie playing a starring role at left half (midfield). Back in Waterford a 20 year old Shamie played on the Bohs team that reached the FAI Junior Cup final in 1953. The Blues then made their move, bringing Shamie to Kilcohan Park on amatuer forms and immediately broke into the team. In 1954 he was selected on the Irish Amateur International team against Scotland at Celtic Park. Shamie joined the Blues at one of the most exciting times in the club’s history.
In the 1953/54 season Waterford FC changed their strip to white shirts with a blue collar and royal blue satin knicks and blue soaks They dazzled Transport in Harolds Cross and the Dublin public christened them the ‘Glamour Blues’, but it was the style of play that really caught the eye. That season Waterford emerged as the most exciting team in the League. This was known as the ‘Jimmy Gauld season’ as the Blues broke goal scoring and attendance records all over the country, as they scored 129 goals in 42 games.

PEAK PERFORMANCES
Although still in his early 20s, Shamie was proving to be one of the most important players on the Blues team, showing remarkable consistency and versatility, initially playing wide on the left, but he also played centre back. While the bulk of his games were in those positions he also played at full back, striker and winger. Shamie had now signed professional terms with the club as the 1955/56 season got underway. At the end of the first series of games the Blues were in third place, but then they beat Limerick 7-1 to move into second place. The final match in the first round against Shamrock Rovers, over 30,000 people were in attendance as Waterford won 0-1 to go top and live up to their reputation as ‘The Glamour Team of the League of Ireland.’ 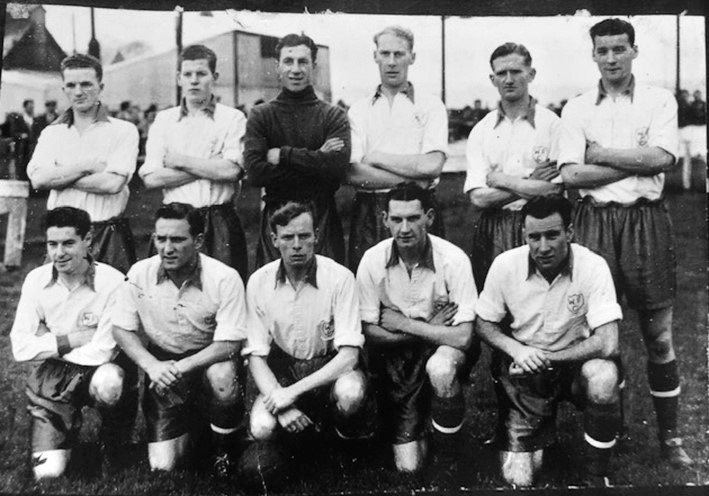 The crowds flocked to see the Blues, some of the games in Dublin had to be switched to Dalymount Park as St. Pats and Shelbourne gave up home advantage to accommodate the crowds. The next two seasons were disappointing for Waterford but the 1958/59 season saw Shamie Halpin playing the best football of his career and many of the pundits were calling for him to be included in the full Irish International team. The Blues picked up a trophy beating Sligo Rovers by 6-2 in Kilcohan Park to win the Shield. The FAI Cup was a competition of misfortune for the Blues and Shamie Halpin, in the ten seasons between 1950 and 1960 they played in six semi finals but only reached one final that they lost to St. Pats after a replay.
Shamie Halpin played in the first game but was left out for the replay, which many saw as a mistake by Blues manager Alec Stevenson. When Shamie left Kilcohan Park he returned to Bohs and played for ‘The Shops’ in the local Factory League and looking after his family, wife Kathleen and three sons Paul, Michael and Seamus, and two daughters Claire and Anne-Marie. Shamie initially worked in Graves, and then moved to Clonmel to manage Ryan’s Decorating Centre until his retirement. Today the legacy of Shamie Halpin continues as his grandson Matthew is a vital part of the Bohemians U-11 team at Ben Wadding Park, the son of Seamus Halpin. Young Matthew is very much in the mould of his grandfather, tall, lean and good on the ball, this young lad could have a bright future. I am sure Shamie will be looking down on young Matthew and taking a keen interest on his progress from that great football pitch in the sky.
Rest in peace Shamie, one of Waterford’s best ever footballers.