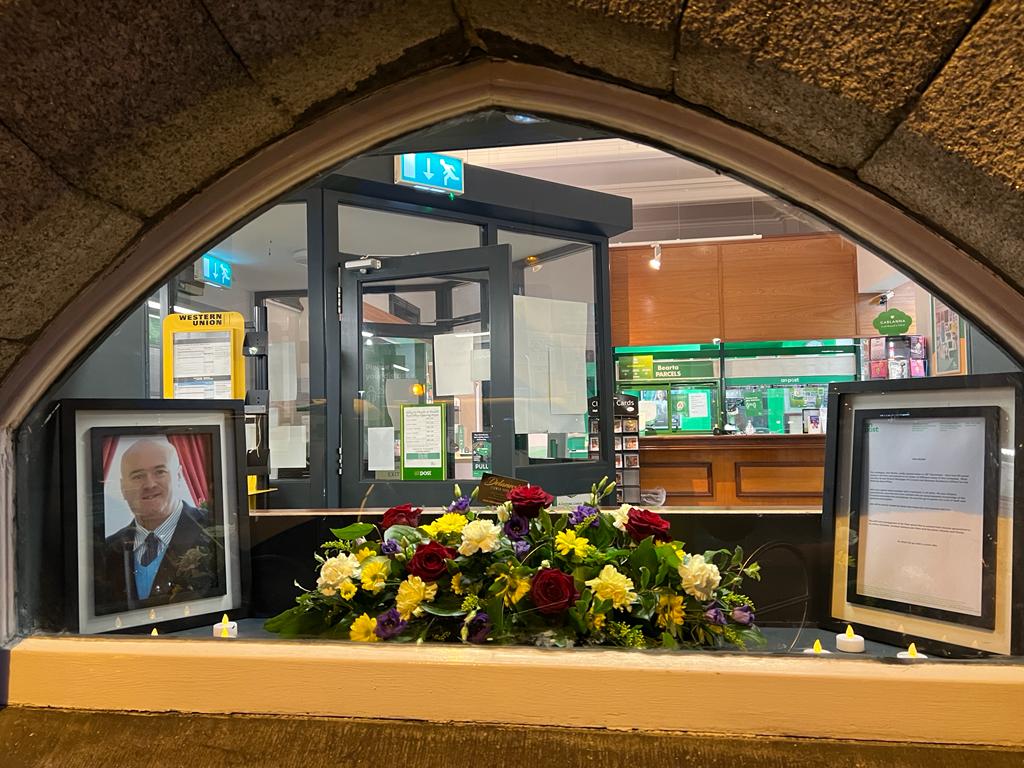 A FLORAL arrangement and a photo on display in a window of the GPO in Waterford City formed a poignant tribute to a much respected colleague, friend and Waterford man, who passed away suddenly on Christmas day.

On Friday morning last (January 7), the Requiem Mass was held at St. Paul’s Church for the late John Butler of Marine Drive, Tramore and formally of Sunrise Crescent, who died on December 25, 2021.

Welcoming mourners to the Church, Fr Pat Fitzgerald P.P. offered his deepest sympathy to John’s mother Kathleen, brothers Seamus and Alan, sisters Sharon and Elaine and family and friends. Fr Fitzgerald said news of John’s sudden death on the Prom on Christmas Day travelled far and wide, adding that death seems out of place when speaking about a man who lived life to the full.

“He pursued a successful career. He travelled very extensively. He immersed himself in adventure and outdoor pursuits. He gave very generously of himself to his family and his friends. He read widely and deeply in poetry and literature and he was in his time a very active sports man in rugby and earlier in hurling,” he said.

Citing the French expression, “Joie de vivre”, Fr Fitzgerald felt it was a phrase that fit the life of John Butler very well.

While listening to tales of John’s love of climbing, Fr Fitzgerald was reminded of Colm Ennis from Lismore Park, who sadly died in a climbing accident in the French Alps. Quoting an excerpt on one of Colm’s blogs, which described beautiful scenes as he descended from a climb on the Cape Wrath Trail in Scotland, Fr Fitzgerald said his experience was an “encounter with the infinite; a real religious experience, an epiphany of the eternal.” Not knowing if the two men knew he each other, he was sure they were kindred spirits.

Giving an insight into his brother’s life, Alan said John was born on April 7, 1963, the first of five children born to Kathleen and Dick. He was educated in Mount Sion and went on to work for An Post, where he enjoyed a distinguished career.

In his younger years he played football for Bolton, rowed with Waterford Boat Club, played rugby for Waterford Crystal RFC and Waterpark RFC, before eventually playing for Waterford City RFC. He also hurled with Fenor. When his dad passed away, John took on all his responsibilities and acted as a rock for his mother. Alan described John as a man of “strong opinions”, but one who was non-judgmental of anyone seeking advice. “He was intelligent, well-read, could converse on most topics and when needed he would stand his ground,” Alan said.

Recently, John acted as branch manager of An Post in Clonmel and was appointed branch manager in Waterford, while also pursuing his role as business excellence officer for the midlands area office in Clonmel. John was looking forward to his retirement at 60.

Having lived in Tramore for 30 years, John became a feature of life there, often enjoying a coffee and having a chat in his “happy place” on the Prom. In his 40s John took up hillwalking and kayaking, travelling extensively. “To say he had a life filled with adventures is an understatement,” Alan said.

John climbed the highest peaks in Ireland, Northern Ireland, Wales, Scotland and England many times. He also travelled to the Alps and the Dolomites among other mountain ranges. He enjoyed elaborate pranks and never took himself too seriously. He also enjoyed planning outings and meeting new people with the Comeragh Mountaineering Club, and going on holidays with family and friends.

Alan thanked all of John’s friends who filled him in on stories of his brother’s life. On behalf of the family, Alan extended thanks to Tramore and Waterford Garda Stations, Tramore Lifeguards, the National Ambulance Service, his neighbours and other members of the Tramore community who assisted John in his time of need.