On The Spot: Rachel McCartney 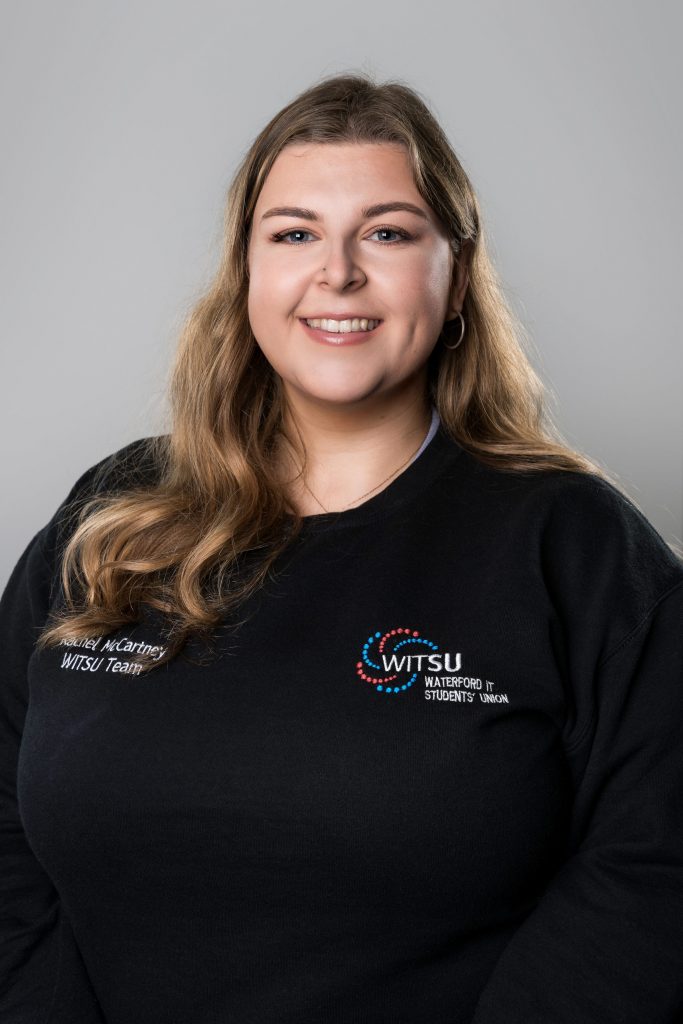 Rachel McCartney (22), originally from Durrow, County Laois, is the current President of WITSU (Waterford Institute of Technology Students’ Union). Rachel is a recent graduate of WIT with a BA and BA Honours in Social Care.

Day in the Life

MY day starts with me usually in the office around 8:20am. As WITSU President, I am the chief spokesperson of the organisation. My main tasks are managing the union finances, working on the formation of the TU, representing all students within WIT, leading and organising the WITSU Executive, lobbying the Institute and Government for contemporary issues.

I have three other sabbatical officers, Jenny (Events and Engagement), Lauren (Welfare and Equality) and Aoife (Education) alongside a compliance officer and a part-time executive of 10 other part-time roles. No day is the same in WITSU, some days I am talking to the media, emailing TDs to raise awareness of the issues we are facing, while on other days I support my other officers with whatever they may need. We run different awareness campaigns on contemporary issues and to educate students, for example, ‘Safe Sesh’, ‘Ask for Angela’, SHAG (Sexual Health and Guidance) and ‘Mind your Mates’ to ensure student safety, especially after college hours. As President, there’s a lot of work that goes on behind the scenes. Any events or campaigns that we run take months to plan; as a team we’re always working on something new. It’s an absolute honour to have been elected by the students of WIT and I will serve them as best as I can.

I went to Heywood Community School in Ballinakill, County Laois. I did relatively well and had a passion for art but I hated going to school. I got badly injured when I was in Fifth Year and I ended up in hospital for a while and when I returned to school, I missed a good bit because of hospital appointments. That was when I started to dread it. I just struggled to catch up and I felt like I was irrelevant to some teachers (I felt a few of them thought I wasn’t trying anymore). That made it hard for me to go in because I did genuinely try but I think that’s what pushed me on when I reached college.

Looking back, there were two teachers that I remember vividly. The first teacher was my art teacher Ms Webster; she had a very caring nature and around exam season she would always check in on her art students. The other teacher wasn’t actually a teacher, she was my Sixth Year Guidance Counsellor Ms Reddington. When I got injured, she was a constant support for me and encouraged me to challenge myself, and when offers came out I remember her being so proud of me even though in my head I thought I had failed. She encouraged me to go to college and gave me the confidence to pursue third level education. It’s mad how much of an impact she had and she probably doesn’t even know it!

I would tell her to love herself more and be confident in who you are. I would tell her everything happens for a reason and sometimes your plans don’t work out and that’s okay. I would also tell her that you don’t need to have your life plan set out before you turn 18, you have your entire life ahead of you so don’t rush.

I enjoy going back to Laois on the weekends and taking my dogs for walks. I listen to music and podcasts when I am out walking. The podcasts are usually comedy or true crime – as grim as it sounds! I also enjoy baking; I find it therapeutic and when I bake, it’s all I have on my mind. Recently I have started to draw again which was a hobby I lost once I left school.

I am not a huge fan of movies but ‘The Blind Side’ is always a humbling film to watch. When it comes to music, I listen to everything from Black Sabbath to ABBA. I vividly remember one night when I was around 12 or 13 years old there was a Live Aid documentary on; me and my dad watched it and that’s when I was introduced to a vast variety of music. Music was not a big thing in my house unless it was being played at the end of ‘Up For The Match’ or ‘The Sunday Game’, it was usually just my Mam singing Westlife and that was it. But if I had to pick, ‘Californication’ by Red Hot Chili Peppers is a classic.

I’m not much of a crier; I’ve a real country-style mentality of just getting on with things but I did cry a few weeks ago when I went to Maastricht in the Netherlands, to surprise my best friend who had recently moved out there. It was during the middle of Freshers Week here in WITSU and there were a lot of late nights and early mornings so when I finally landed there, the emotions were extremely high!

It would be silly of me to not recognise my achievement in being elected as President of WITSU by the students of WIT. I’ll be forever grateful for that feeling. Recently, I adopted a rescue dog from the pound – his name is Freddie – and being able to have the means to rescue him and then seeing how quickly he settled in with my other dog and the family always cheers me up.

No. I grew up in a very Catholic orientated environment from school, where we had to say ‘Our Father’ every morning in Irish before we went to classes and in my home life. My mam prays every day but she has never pushed her beliefs on me.

I have two! The first one is a watch I got for my 21st birthday from my parents; it’s something I will always have and I love it. The other is definitely my degree from WIT. I put everything into my four years in WIT after struggling in school so my degree will always be something that I can look back at and say that I did it!

That you’re so close to everything and all it has to offer. It has lovely spots – if you know about them! I also find the people here extremely friendly and always willing to help which is great to see.

I think it’s no secret that Waterford is facing one of the worst accommodation crises we have ever seen. This year along we had over 1,000 students who were struggling to find accommodation. That’s an absolutely crazy number – and then there’s the general population also looking for somewhere to live. I hope we see some new housing developments sooner rather than later. What’s the point of having a beautiful city if people can’t find a place to live here?