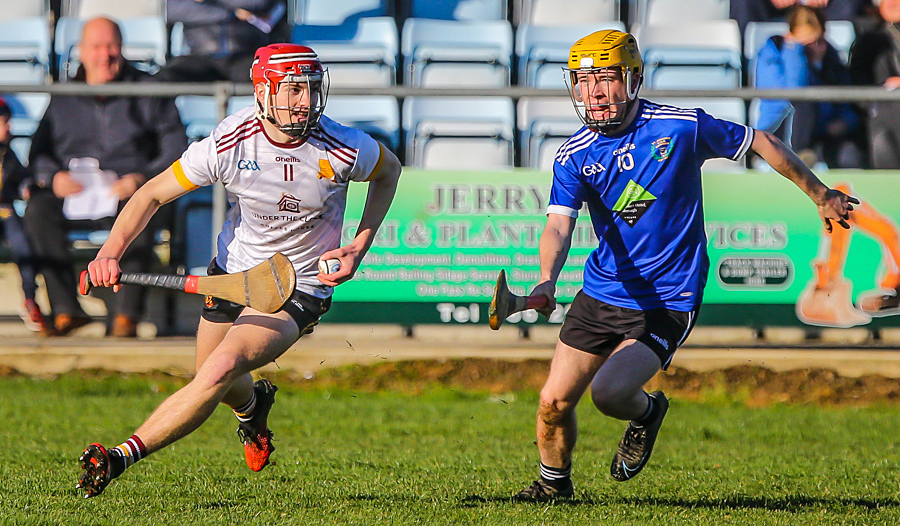 Paddy Fitzgerald has been outstanding in De La Salle’s run to the semi-final and he’ll be crucial to their chances again on Saturday. Photo: Maurice Hennebry.

Saturday next will see De La Salle College bidding to reach the Dr. Harty Cup final for the first time since 2008 when the college achieved the distinction of winning back to back Munster and All Ireland titles. The significance of those victories and their impact on Waterford hurling should not be underestimated as they preceded a period of strong underage performances by Deise teams on the underage intercounty scene particularly with the winning of the first Munster minor title since 1992 in 2009 with players such as Stephen O’Keeffe, Pauric and Philip Mahony and Jake Dillon who had figured on those winning Harty Cup teams.
Likewise, the back to back Harty Cup successes of Colaisti na nDeise Deise and Dungarvan Colleges in 2012 and 2013 contributed hugely to the All Ireland minor success of 2013 and the corresponding All Ireland U-21 victory of 2016 involving many of the same players.
On Saturday De La Salle will start favourites to advance to the final on foot of their first round victory over the Clare side that proved enough to secure an automatic quarter final place. That game was a thrilling encounter with Patrick Fitzgerald once again proving the star of the show as he was when steering his side to victory over Nenagh C.B.S. last week.
The score of 0-20 to 0-18 on De La Salle’s favour against Tulla indicated very little between the sides and the Clare side bounced back from that defeat to storm through the qualifiers with a 2-16 to 1-16 win over a fancied St. Colman’s side that had crushed Blackwater C.S. Lismore in the opening round. It was Tulla’s top scorer Sean Withycombe who brought the game to extra time with a goal in the fourth minute of added time and in that extra time period it was Tulla who toughed it out to gain the victory.
Again, the Clare side would have been outsiders when they faced C.B.C. Cork in the quarter finals but once more they rose to the challenge and came away with a 1-17 to 1-15 victory.

GREAT GAME IN PROSPECT
Clearly, De La Salle will face a much improved St. Josephs side from that they beat in the opening round. On the other hand, De La Salle too will have improved from that opening game and will take great confidence from their impressive win over Nenagh. In Patrick Fitzgerald they have a potential match winner on any given day but they are by no means a one man team. In goalkeeper Cian Troy, defenders Conor Keane, Craig O’Keeffe, Rory Dobbyn and Aaron O’Neill they have capable county minors as well as Mooncoin’s Paraic Murphy. In attack Fitzgerald can rely on support from fellow county minors Jack Twomey and Sam Pender.
The St. Josephs side is drawn from the traditionally strong clubs of East Clare in O’Callaghan Mills, Feakle and Tulla and will, no doubt, be quietly confident of overturning the result of their first round clash. They will be very aware of the threat posed by Patrick Fitzgerald and will, I am sure, have plans afoot to deal with it. They may find that more difficult than they think and they would ignore the other threats in the De La Salle attack at their peril.
It has all the makings of a great game and De La Salle at their best will be good enough to get through to the final against Thurles C.B.S or Ard Scoil Ris.