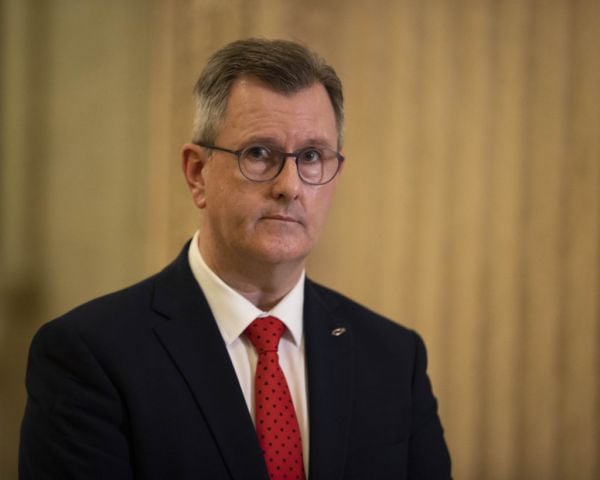 The DUP leader has warned the UK government he is not prepared to be “strung out for weeks” waiting for an assurance that it will act over the Northern Ireland Protocol.

Sir Jeffrey Donaldson said the British government needs to make clear it will move to suspend parts of the protocol – by triggering its Article 16 mechanism – if a negotiated deal with the EU is not reached.

His comments in Crumlin, Co Antrim, came after the latest round of talks between British foreign secretary Liz Truss and European Commission vice-president Maros Sefcovic on issues with the contentious post-Brexit trading arrangement.

Ms Truss and Mr Sefcovic described the discussions in Brussels as “constructive” and said engagement on resolving outstanding issues would continue.

Commenting on the state of the talks, Mr Donaldson said: “I made clear at the beginning of this new year that January was going to be a very important month and I need to hear from Liz Truss and from the prime minister if these talks are not going to come to a conclusion in the very near future, and if they’re not going to reach agreement then what action, what decisive action, is the [UK] government prepared to take in line with their command paper published over six months ago to protect Northern Ireland’s place within the UK internal market?

“That is a UK government commitment. It was part of the New Decade, New Approach agreement (2020). It hasn’t been delivered, it needs to be delivered.”

Mr Donaldson suggested his party would follow through with its threat to withdraw ministers from Stormont if progress is not made.

“And I need to know that now – I’m not prepared to be strung out for weeks on end with nothing and no assurance that the government is going to act.

“If they’re not going to act, then be honest and tell us, and we will have to take the action that we need to take to bring this matter towards a solution.”

Sinn Féin deputy First Minister Michelle O’Neill said the issues related to the protocol were a direct consequence of the “hard Brexit” advocated by the DUP.

“The implications of Brexit are being felt right across our community,” she told Assembly question time at Stormont.

“So I still maintain the position of rigorous implementation within the framework of the protocol because, despite the utterances of the DUP, the protocol isn’t up for negotiation.

“And as we speak here today there are talks ongoing between the EU side and the British government and I hope, I really hope that there’s momentum built upon.

“What we want to find is a way forward that allows, within the framework of the protocol, all these issues to be ironed out.

“I believe in east west trade. I want that to continue. I have said I want to see access to both markets (EU and UK) – there’s huge potential here, but the DUP are so blindsided (they) cannot see it.”

Later in the chamber, there were robust exchanges involving DUP Economy Minister Gordon Lyons and pro-Remain MLAs amid diverging claims about the economic impact of the protocol.

Mr Lyons told MLAs: “When grace periods and mitigations come to an end things are likely to get much worse.

“It’s clear that during 2021 many local businesses and indeed consumers experienced a range of issues as a result of new requirements for sourcing goods in Britain and I have spoken personally to many of those businesses.”

“A recent Manufacturing NI survey showed the biggest issue facing businesses is the shortage of labour, the protocol is down their list of priorities,” she said.

“Two thirds of businesses do want the protocol to be made to work and 40 per cent want the Executive to maximise the opportunities.

“So does the Minister accept that, just like with Brexit, he and his party are out of step with the majority of businesses here on the protocol?”