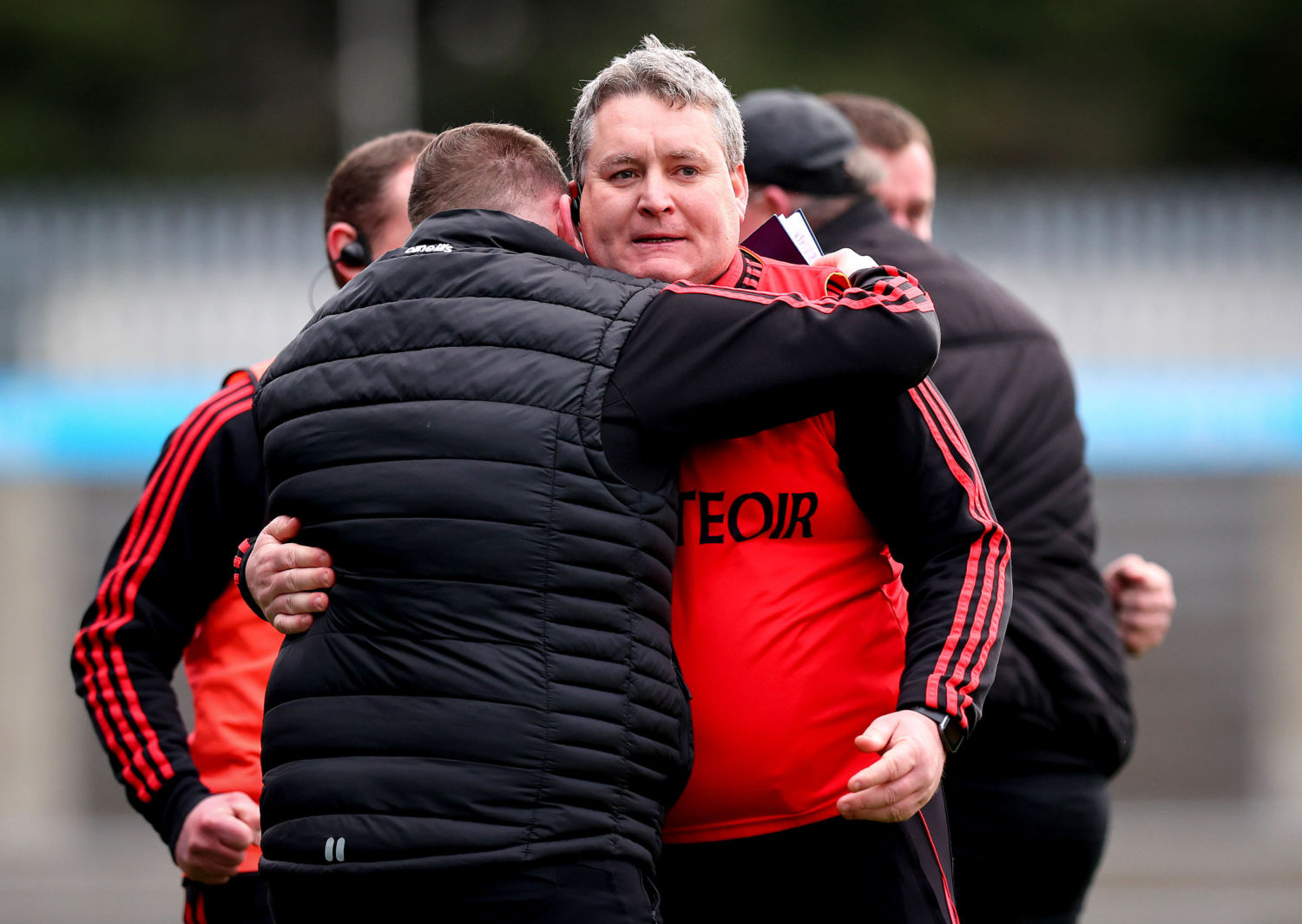 Ballygunner manager, Darragh O’Sullivan, is congratulated by members of his backroom team after Sunday’s win over Slaughtneil. Photo: Inpho.

Ballygunner manager Darragh O’Sullivan was keeping his feet firmly placed on the ground after witnessing his side show character in abundance to overcome the challenge of Derry’s Slaughtneil in securing a passage into their first All-Ireland Club Senior Hurling Final after a tough encounter at Parnell Park on Sunday last.
After their brilliant Munster final win over Limerick’s Kilmallock, the eight-in-a-row Waterford County Champions will now have three weeks to prepare for the mammoth task that lies in wait, Kilkenny’s Ballyhale Shamrocks in the final, where they’ll be hoping to seek revenge for semi-final defeat back in 2019.
But for now, O’Sullivan is heaping praise on his players for the effort that they put in to get them to Croke Park whilst also paying tribute to the contribution that their opponents played in a game that had fans of both teams on the edge of their seats up the final whistle of Dublin referee Sean Stack.

“ABSOLUTELY THRILLED”
Speaking after the game, the Ballygunner manager said, “I’m absolutely thrilled, and I’m thrilled for that bunch of players. They’ve worked so hard over the last number of years, and we’re in an All-Ireland final now, which is great.
“We know that we’ve got to be the best we can on that day, and we’ll do everything that we can to get these lads to be the best we can be on that day. I think that every team targets the start of the match, and the reality of it is that the lads were very composed when they got into those positions.
“From a management perspective, I thought that they took the right option with the ball. Kevin (Mahony) passed it to Billy when people might have said that he should have shot for the second goal. That’s what you like to see.
“These lads are all 100% as one really. They don’t care who scores the goals. I was delighted to see Billy (O’Keeffe) get man of the match. That’s great to see. He was a forward at the start of the year then Philip (Mahony) got injury so we put him back in the backs.
“When Philip came back, we put him back in the forwards. I think that tells you how good a hurler he is because he is just so flexible like that. I’m thrilled for him, but I’m thrilled for all the players for the effort that they put in.”

“INTENSE BATTLE”
O’Sullivan was full of praise for the challenge that their opponents put up to them. “Slaughtneil are a formidable outfit, and we knew that coming up here today. We knew how good they are, and we knew what they were going to bring to the table. They brought every bit of it, and even more.
“I said to the lads in the last water break that they weren’t going to go away, and that they were going to be right there at the death. We responded well, but look if we weren’t going to win today, I would have been delighted for someone like them to get to the final. They are a phenomenal team and I’m full of admiration for them.
“It was a hugely intense battle like we thought it would be. I think that both teams brought a huge level of intensity to the game. There was hard hits in it, and for the spectator it was real edge of the seat stuff. Both teams went at it hammer and thongs, but we’re just so happy that we got out the right side of it.
“For us it will be the same couple of weeks as the last couple of weeks. We’ll reset now, and we’ll start again because we have to bring these lads back down to earth. We’ll go again, and we’ll try be the best we can be in the All-Ireland final.”