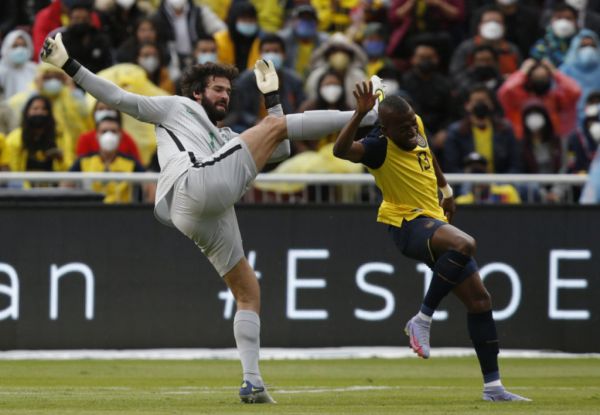 An eventful World Cup qualifier in Quito finished level despite each side having a player sent off at Estadio Rodrigo Paz Delgado.

It could have been more had the video assistant referee not been deployed on more than one occasion, including in stoppage-time to prevent a penalty being awarded to the hosts and Alisson being sent off.

Real Madrid midfielder Casemiro gave Brazil the lead after only five minutes and it got even better for the visitors when Ecuador goalkeeper Alexander Dominguez was given his marching orders for catching Matheus Cunha with a kick to the neck.

The numerical advantage for the Selecao did not last long though with Tottenham full-back Emerson Royal receiving two yellow cards in quick succession to ensure parity was restored in the 20th minute.

Alisson received the first of his two red cards not long after when in the aftermath of a clearance he caught the head of Ecuador’s Enner Valencia.

VAR intervened and told referee Wilmar Roldan to review his decision on the pitchside monitor, with the card eventually downgraded to a yellow.

It was not the end of Alisson’s eventful evening though with Ecuador able to equalise with quarter of an hour remaining when Felix Torres headed home from a corner.

The hosts thought they were able to celebrate a famous win in stoppage-time when they were awarded a penalty.

Alisson was again at the centre of the drama after his attempted punch saw him catch substitute Ayrton Preciado in the head with his follow through, but after referee Roldan pointed to the spot and showed a second yellow card, it was subsequently overruled again and the game finished level.