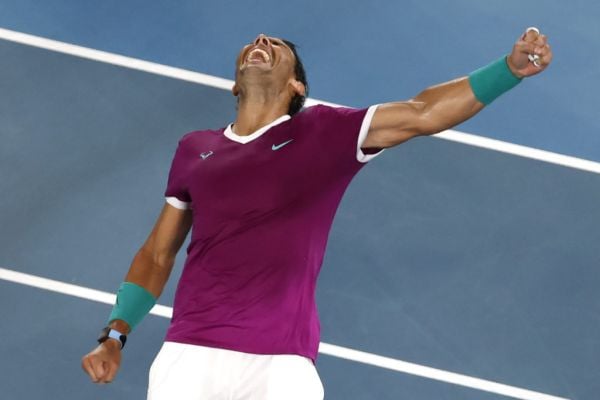 Rafael Nadal will take on Daniil Medvedev with history at stake in the Australian Open final on Sunday.

Nadal is now one victory away from becoming the first man in history to win a 21st grand slam singles title after beating Matteo Berrettini 6-3 6-2 3-6 6-3.

Medvedev is looking to make it back-to-back grand slam titles after claiming his first at the US Open and he kept his head to defeat Stefanos Tsitsipas 7-6 (5) 4-6 6-4 6-1 despite a mid-match meltdown.

Picture of the day

Quote of the day

Back on Twitter again (it’s really nicer away from here), but..

I’m pleased to advise that following consideration of a request from Tennis Australia for a higher cap, the ticketed capacity of the AO has been increased to 80% for the finals on Saturday & Sunday 🇦🇺🇺🇸🇬🇷 🇮🇹 🇪🇸 🇷🇺

Good news for Tennis Australia – and tennis fans in Melbourne – with the capacity at Melbourne Park, which was increased from 50 per cent to 65 per cent earlier this week, going up again for the final weekend.

The first of the five main titles went to France’s Kristina Mladenovic and Ivan Dodig of Croatia, who defeated Australian duo Jaimee Fourlis and Jason Kubler 6-3 6-4 in the mixed doubles final. It is an eighth slam title for Mladenovic and a sixth for Dodig.

First Ashleigh Barty aims to become the first home player to win a major singles title in Melbourne since Chris O’Neil 44 years ago when she takes on American Danielle Collins.

That is followed by the final act of the Special Ks show as Nick Kyrgios and Thanasi Kokkinakis play fellow Australians Matt Ebden and Max Purcell in the men’s doubles final.