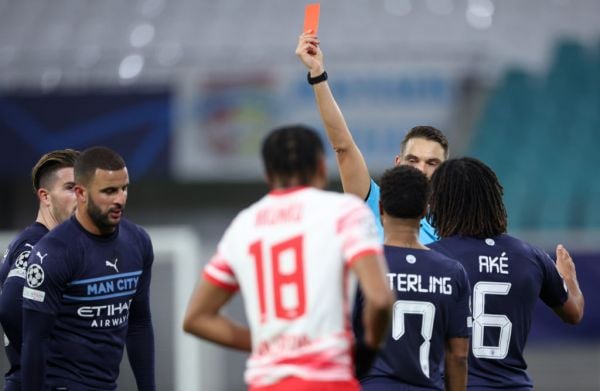 Kyle Walker has been banned for Manchester City’s next three European matches for his sending-off against Leipzig last month, UEFA has announced.

The England right-back was shown a straight red card for a petulant foul – described as “assault” on a UEFA charge sheet – in the closing stages of City’s final Champions League group match against the German side.

The suspension, which follows a hearing of the European governing body’s control, ethics and disciplinary body, rules Walker out of both legs of their upcoming last-16 tie against Sporting Lisbon.

The 31-year-old will also miss the first leg of City’s quarter-final, should they progress that far, or their first match in European competition next season.

Walker was dismissed as frustrations got the better of him with eight minutes remaining at the RB Arena and he kicked out at Leipzig forward Andre Silva.

City went on to lose the match 2-1. There had been little riding on the game for City, who had already been assured of top spot in Group A.

Walker’s ban, however, means manager Pep Guardiola may now be counting the cost of his decision to field a strong side for what was effectively a dead rubber.

The City boss certainly seemed unimpressed with Walker’s actions at the time.

“The red card hurts us, especially for the round of 16,” Guardiola said after the game. “Kyle Walker is an important player for us and is unnecessary to lose him like this. I hope he learns from this.”

City face Sporting in the first leg of their last-16 tie in the Portuguese capital on February 15 with the return at the Etihad Stadium on March 9.