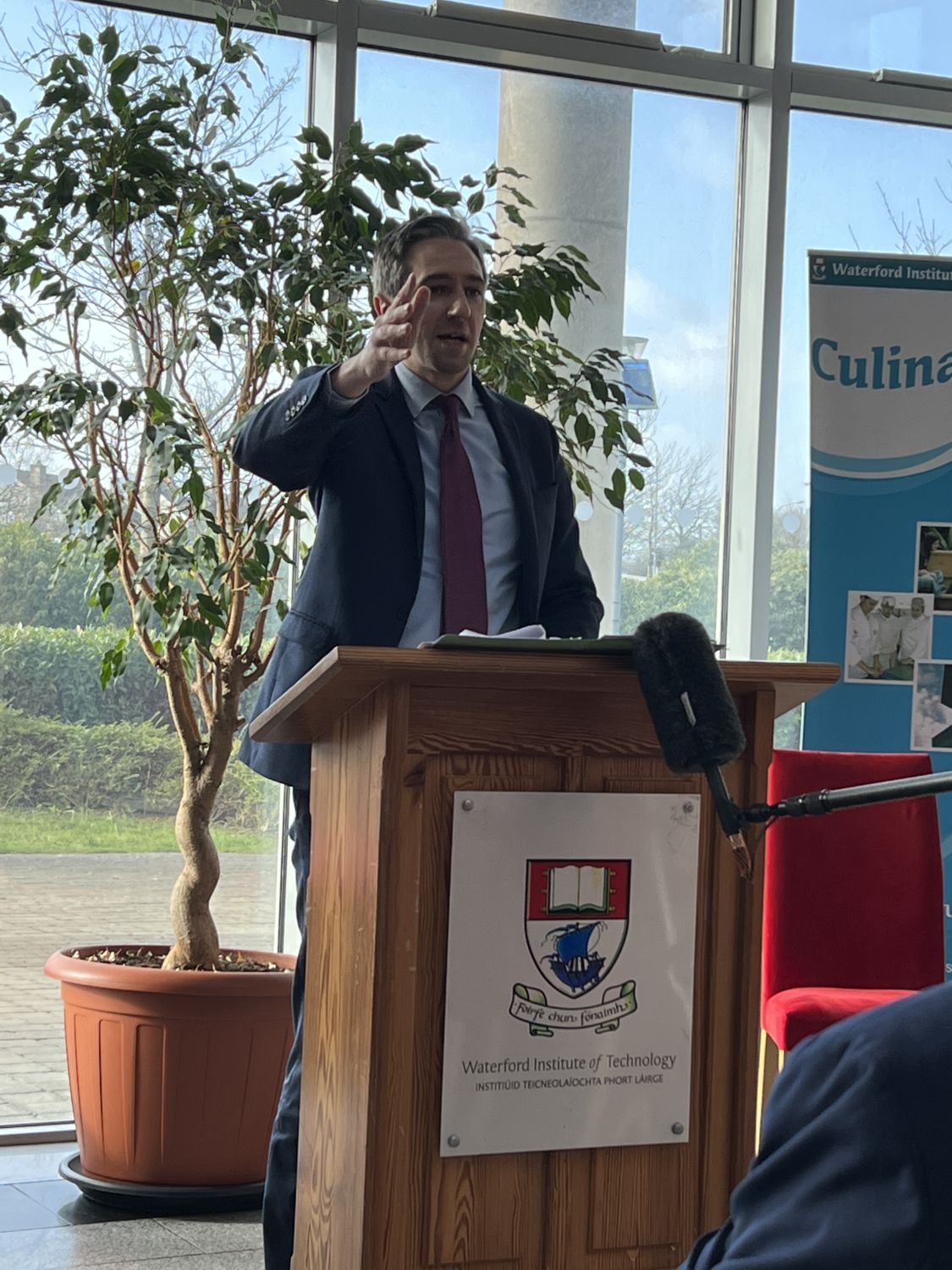 IN advance of Higher Education Minister Simon Harris visiting Waterford on Monday morning last (February 21), rumour mills were in overdrive about what manner of good news he would come armed with. The Waterford News & Star had been requesting interviews with him for the last four months, only to be constantly told that he wasn’t available “but would be in Waterford soon”.

When he finally arrived, we could be forgiven for thinking he would be armed with such positive news as the confirmation of the acquisition of the Waterford Crystal site. Sadly, no such news was forthcoming and the Minister’s arms were swinging as he made his way into Waterford Institute of Technology (WIT) flanked by his government colleagues, Mary Butler TD, Marc O’Cathasaigh TD and Senator John Cummins.

“I am in Waterford today to make two announcements,” Minister Harris said. “We have decided to appoint Dr Paddy Prendergast as the first chair of the new Governing authority (of the South East Technological University). Paddy has led Ireland’s top ranking university – Trinity College – with much distinction, for the past 10 years. The fact that Paddy, a South East man, wants to help this new university is very encouraging.”

“I want to wish Dr Prendergast, Mr Bergin and Ms Beadle the very best in their roles. Having an inaugural governing board with such vast and invaluable experience will be of huge benefit to the technological university as it embarks on this new journey,” Minister Harris said.

All good questions, but no answers were going to be forthcoming from this visit. Instead, Minister Harris thanked WIT President Professor Willie Donnelly and his colleagues for their work in preparing a business case, which was currently being considered by the Higher Education Authority.

Given the amount of interview requests that his office turned down on his behalf, Minister Harris was keen to take as many of our questions as time allowed. Sadly, as the business case for the university was still being considered, there was a limit to what answers could be provided. Nevertheless, we asked anyway.

“When will we find out about new programmes, academic disciplines, student numbers and funding?” we asked first.

“The new, yet to be appointed, President will set the direction of the new university in terms of courses, I obviously then will decide on the funding so that it can get to the critical mass that it requires,” Minister Harris said. “What I can say is that I would expect the first round of interviews for the new President to take place in the week of April 18 and the announcement to take place in advance of May 1 (the commencement date for SETU).

“Waterford’s expansion does not have to compete with any other expansion plan around the country. We recognise that there’s a distinct case in Waterford and that it can’t just be a name change and must involve the people of Waterford seeing a big physical difference in terms of the expansion. The business case will need to be assessed rigorously but as quickly as possible.”

Minister Harris said that he understood people’s scepticism and admitted that a lot of people were not going to believe the promises and commitments until they see it for themselves. In referring to the Waterford Crystal site, he reiterated the fact that he wasn’t allowed to mention specific sites but said “let me be Crystal clear, we want to expand the footprint of Waterford and the business case to expand is with the HEA. I’ve given an indication today as to what we would like to do for Waterford teaching, student accommodation STEM and research… the funding exists in my department to make the expansion happen but we have to get the deal done first.”

There was a sense that Minister Harris wanted to deliver good news in Waterford today but he simply couldn’t. As it stands, he must wait for the Higher Education Authority to recommend to his department that there is merit in investing in Waterford to the level that Waterford expects.