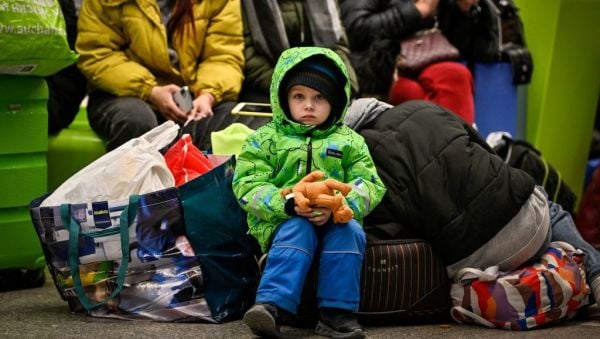 Minister for Agriculture Charlie McConalogue has said Ireland has no option but to “reach out to those of our fellow European citizens who are displaced who have nowhere else to go”, adding that proportionally it was possible the State could receive 200,000 refugees from Ukraine.

A Cabinet meeting later today will see ministers discuss the crisis in Ukraine as well as the Irish response.

The 200,000 figure is based on the expectation that 2 per cent of the 10 million people likely set to flee Ukraine could come to Ireland.

It was going to be challenging, but “we have to do our best”, Mr McConalogue told RTÉ Radio’s Morning Ireland.

“While there isn’t the opportunity to put long-term permanent accommodation in place overnight, the best possible arrangements must be put in place to accommodate them to meet their basic needs, to ensure that they are sheltered and looked after, and have access to education and healthcare, and, indeed, employment.”

At present, 10,000 people have arrived from Ukraine and the situation will continue to be processed at a national and European level.

The Minister added that the response from the Irish public in offering accommodation had been phenomenal.

On Sunday, Minister for Children and Equality Roderic O’Gorman said the Government has begun the process of placing Ukrainian refugees with Irish families.

Mr O’Gorman said vacant properties would first be used to house those fleeing the war in Ukraine, followed by the approximately 20,000 offers of accommodation pledged by Irish people.

Mr McConalogue will also seek Cabinet approval for a €12 million package for tillage farmers in a bid to boost production amid the disruption caused by the war.

Farmers have already reported a spike in the cost of fertiliser and animal feed.

However, he acknowledged the growing burden of high costs facing farmers.

“It will be more challenging this year from a cost point of view, from a supply chain point of view, I think we will meet those challenges, and we will continue to ensure that we produce food as we normally do, and indeed supply internationally as well,” he said.