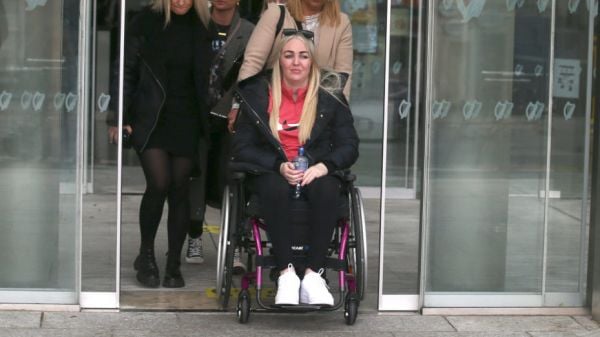 A mother-of-one has described the moment her “evil, sadistic” neighbour – a man she has known since childhood – left her permanently paralysed in an attempted gun murder that “obliterated” her life.

The Central Criminal Court heard during today’s sentence hearing that 33-year-old Dean McCarthy “burst into” Sinead Connolly’s (34) home with a gun “in a rush of adrenaline” and repeatedly shot her while her eight-year-old daughter hid under the kitchen table.

The court heard that in the lead-up to the shooting, McCarthy had subjected Ms Connolly to a campaign of abuse where he regularly called her a “whore” and had grabbed her by the throat and spat in her face. McCarthy also told her he was going to “leave her in a body bag”.

Ms Connolly told gardaí that because of the escalating situation and concern for her safety with McCarthy, she wanted friends “to knock into” the defendant’s flat and “ask him to stop”.

“Very menacing” CCTV footage of four masked men outside McCarthy’s flat moments before the shooting was shown to the court. One man can be seen holding up his fingers “like a pistol or a gun sign”, the court heard.

McCarthy then emerged from his flat and appeared to be clutching himself, with the court hearing that McCarthy was accidentally shot and seriously injured when receiving the firearm he shot Ms Connolly with.

Immediately after this McCarthy and Mr B “kicked in” the door of Ms Connolly’s home. Three minutes later an ambulance was called.

The court heard that when McCarthy kicked down the door and entered the victim’s flat, Ms Connolly was in the sitting room and her four friends were in the kitchen with her daughter. The kitchen door was barricaded and the child was put under the table.

McCarthy discharged the firearm on five separate occasions. Ms Connolly was standing when she was shot but ultimately fell onto the couch.

Ms Connolly described to gardaí how she wanted to keep McCarthy’s attention on her at the time rather than her daughter who was in the kitchen.

Things got out of hand quickly

Defence counsel Brendan Grehan SC read a letter of apology to the court on behalf of his client saying: “Things got out of hand quickly and although four masked men tried to force entry to my home that morning to bring me harm, you did not deserve to be hurt like that. I sincerely hope you and your daughter fully recover and I wish you both the very best”.

The barrister stressed that this was not “a planned event” and that the case exemplified most “that people should never take the law into their own hands”.

In a pre-prepared statement to gardaí, McCarthy said he had been under threat and bullied for over two years by certain people in the Bluebell area.

Dean McCarthy (33), who is Ms Connolly’s neighbour, with an address at Bernard Curtis House, Bluebell Road, Dublin 12, appeared at the court on Friday for his sentence hearing, having pleaded guilty last January to her attempted murder on March 6th, 2021.

McCarthy also pleaded guilty on Friday to possession of a firearm, to wit, a G9A Grand Power semi-automatic handgun, with intent to endanger life on the same date at the same location.

The defendant further pleaded guilty on Friday to having in his possession Luger Barnaul ammunition, in such circumstances as to give rise to a reasonable inference that he had not got in his possession for a lawful purpose on the same occasion. 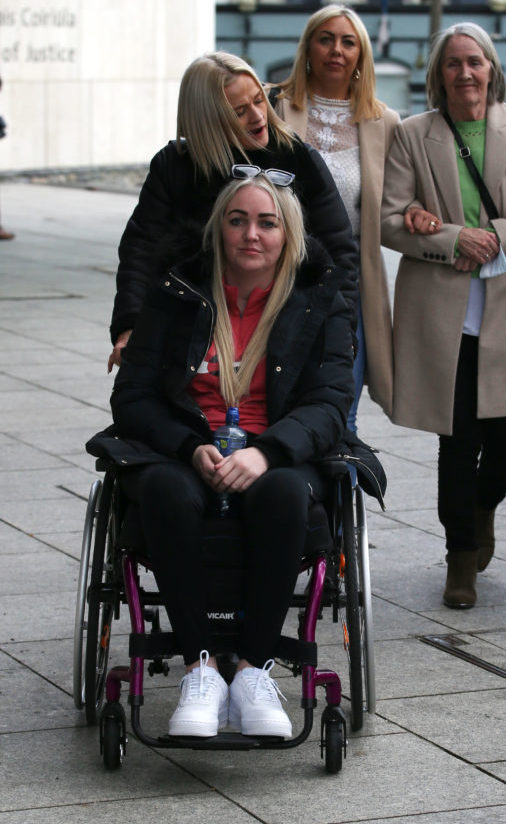 At the defendant’s sentence hearing on Friday, a victim impact statement was read to the court by Ms Connolly, who had to be pushed to the stand in her wheelchair by a garda.

Ms Connolly held up a photograph of herself and her daughter saying: “This is a photograph of how I was when I woke up [from the surgery].” A supporter of Ms Connolly shouted at McCarthy who was in the dock: “Are you looking at that there?”. Ms Connolly’s sister stood behind her and rubbed her back as she read.

Ms Connolly began her statement by saying that she was at home with her daughter and some friends when Dean McCarthy “burst” into her house with a gun “in a cowardly attempt to murder me”.

“I was shot three times and as a result I have been left paralysed; paralysed forever. Another serious consequence of this heinous act is I have a high dependency on a multitude of pharmaceuticals and almost 100 per cent reliance on other people, both medical staff and family. We were making plans for my daughter’s eighth birthday a few days after this frenzied and evil attack which changed our lives forever.

“Dean McCarthy burst into my home firing at me. The three bullets that hit me all caused serious damage. One shattered my collar bone, another broke several ribs and one punctured my lung and shattered my spine. A team of surgeons worked relentlessly for over 12 hours to keep me alive.

“The head of the ICU, who had 40 years experience, later said they were the most catastrophic injuries he had ever seen. Two days later I had another major spinal operation to try to maintain rigidity of the shattered spine using steel rods and bolts.

“I remained in a coma for another 15 days which caused tremendous grief and anxiety to my whole family and close friends as my life hung in the balance, nobody could understand such abject cruelty and manifest evil. My mother later suffered a stroke which I believe was brought on by everything that happened as she was my main caregiver.

“To make matters worse I had to undergo a tracheotomy which rendered me speechless and unable to eat or drink. I couldn’t communicate with anyone, including my daughter. This caused me heightened consternation. This was made worse by the fact that I didn’t know the full extent of my injuries.”

She continued: “Since this attempt on my life I have had to endure constant medical problems, almost perpetual infections, low blood pressure and panic attacks. The pain is not limited to physical, it is obviously emotional both for me and my daughter.

“We have had to separate from each other and I have had to relinquish my parenting role and my responsibility for my daughter’s wellbeing. This is extremely hard because we are so close, my daughter has had to leave home and change schools but no child should ever have to witness her mother covered in blood, lying unconscious on the floor.

She added: “All these things that we take for granted, such as lifting our kids, going to the seaside, swimming, climbing, dancing together are all beyond my physical ability. Any plans we had were diminished by Dean McCarthy.

“I have remained in hospital for nearly 13 months now and I am unsure how long this will be for.

“Dean McCarthy is an evil, sadistic and cowardly bully. Dean McCarthy is a danger to society. He tried to kill me and even though he didn’t he has obliterated both mine and my family’s life. He deserves the severest punishment in law.”

The court heard that McCarthy has 12 previous convictions, all at District Court level, which include possession of knives, criminal damage and road traffic matters.

Mr Justice Paul McDermott remanded McCarthy in custody until April 26th, when he will be sentenced.