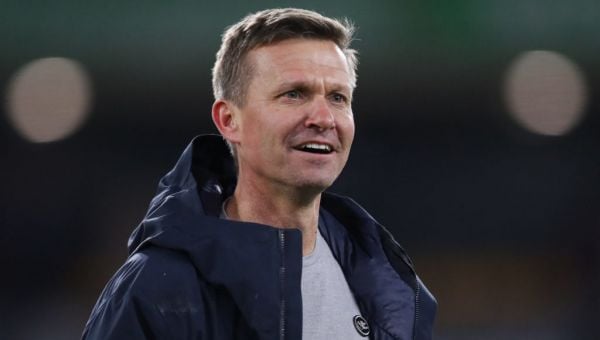 Jesse Marsch is loving life at Leeds but eager to avoid hogging the limelight after supporters sang his name during Saturday’s 3-0 win at Watford.

Many Leeds followers were dismayed when fans’ favourite Marcelo Bielsa was dismissed in late February but a sold-out away end chanted the name of his successor during a significant success over relegation rivals.

American Marsch – who has masterminded 10 points from the last 12 available – was touched by the vocal backing but keen to focus attention on the club’s collective achievements.

“I don’t think it was the first time (they have sung my name),” he said.

“But, to be honest with you, I appreciate it; I appreciate our fans so much. I love being here in Leeds, I love the area, the city, the people. My family and I are really enjoying our time here.

“So much of my emphasis is on the team and us as a group and what we’re about and how we’re going to achieve things together and any time that it draws attention to me, I don’t necessarily like it.

“But I do want to show appreciation to the fans for reaching out to me.

“What’s most important is that they – which they do amazingly – understand that we’re a real group, a team, a club that wants to represent the city and play football that they can be proud of – that’s what matters the most to me.”

Leeds have a break of more than a fortnight before travelling to Crystal Palace on Monday, April 25th.

Marsch expects the relegation picture to have changed markedly by then and emphatically brushed off suggestions his side’s current tally of 33 points will be sufficient for safety.

Asked if they were still in the battle to avoid the drop, he replied “Yeah. Everyone’s getting results around us.

“People in Leeds tell me we have to fight for everything, and I’ve said already that I’m OK with that.

“Especially with this 16-day break now, it would have been really difficult to sit and watch the table knowing that we didn’t pick up the points that we wanted in this game. And things are going to get tight.

“By the time we play against Palace, the table will be tight again. We just have to stay focused on us – I’ve said that a million times now but that’s the most important thing.”

Marsch hopes the intermission before the Selhurst Park trip will help boost the fitness of some of his squad, including Kalvin Phillips.

England midfielder Phillips has made successive substitute appearances following a hamstring problem sustained in December after playing 31 minutes in Hertfordshire.

“I think we’ll use the next two weeks to get him fitter and stronger and healthier and ready to go for Palace.”

Second-bottom Watford were booed off after a ninth consecutive home defeat – their longest losing streak in front of their own supporters since the 1971-72 season.

Hornets manager Roy Hodgson believes his squad are not as dispirited as some of those on the terraces ahead of hosting Brentford next weekend.

“But the mood amongst the players in actual fact isn’t as bad as all that, and I think any fair-minded person who watched the game wouldn’t put our defeat down to any lack of belief or effort or desire.

“Confidence comes from winning football matches, and we don’t win matches, so how do you get that? There’s no words that are going to change that.”