The self-discovery of living with autism 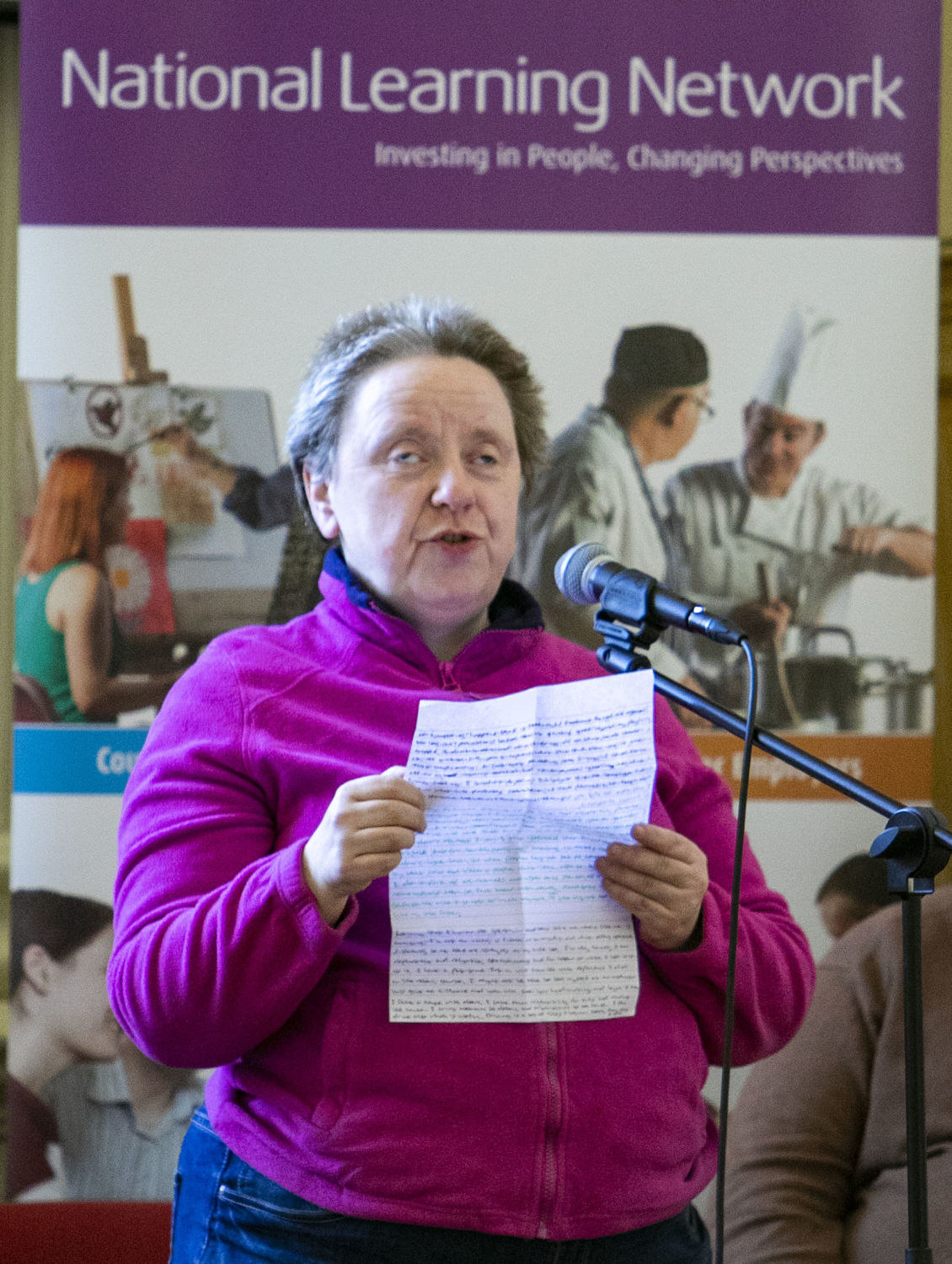 She told the gathering assembled at the inaugural Waterford Disability Network (WDN) in St Patrick’s Gateway that she’d written down what she needed to say on a sheet of A4 paper in detailing her story. As she shared her considered commentary, Carmel spoke from the heart with colour, eloquence and clarity. I suspect there’ll be few better speeches I’ll report on all year.

“I was officially diagnosed as autistic about two years ago, just before the pandemic hit,” she began.

“The signs were probably always there but it wasn’t until I went to the National Learning Network (NLN, on the Cork Road) to do a retail course that things began to fall into place and I began to see others with kind of similar world views. For me, it was like being an ugly duckling and walking in and seeing a load of other swans and thinking, ‘woah, this is interesting’. An amazing journey was about to begin for me.”

Carmel met with a psychologist at the NLN who suggested that she (Carmel) might be on the spectrum.

“I was blown away. At 44 years old, I’d never heard that before and I was very curious to find out more. With Cara Outreach on site, I was able to dip my toe into the water and ask questions before the formal diagnosis… I grew up always feeling out of place. I imagined myself as an alien from a distant planet who was here just to observe humans and to report back to my home planet. I know that sounds silly but for me it was as logical a reason as any as to why I was here.”

Carmel continued: “I experienced the world differently from most of my peers anyway. I loved the character Data in Star Trek, that would have been one of my favourite characters as a kid. Everything had one answer (for Data): it was right or wrong, yes or no, on or off and that just suited me perfectly. No ambiguity, no grey areas. My idea of heaven.”

A sense of frustration

Admitting to a sense of frustration when people don’t say exactly what they mean, Carmel provided an example. “For example, don’t bother saying to me something like: ‘I wonder is the dishwasher empty?’ If what you actually mean is: ‘Carmel, please empty the dishwasher, it’s your turn’, just tell me what you want me to do and I will do it. I’ll follow the instructions.”

Suggesting that she’s not smart – anyone at the conference would swiftly rebut this claim – Carmel stated: “Logic was all I could relate to. That’s probably why I studied Electronics in college but that’s another story. I don’t understand feelings and I struggle with them. I like my world to be measured, tangible, functional – no frilly bits, no optional extras – a place for everything and everything in its place. I need things to follow in sequence, no surprises. Others could find that extremely boring but I feel safe when I know what’s coming next and I need that kind of safety and security; otherwise I just get overly anxious and overwhelmed.”

When feelings and emotions approach Carmel’s immediate radius, “then it quickly goes off or beyond my pay grade. I don’t understand what is going on or what to do about it. As a child, I couldn’t express what this confusion was. It was just frightening. I knew something was wrong. If somebody followed me and asked me what I was feeling or what was wrong, I couldn’t explain. I just didn’t have the language to explain… and I still struggle to recognise the difference between thinking and feeling anything.”

Carmel spoke of her good fortune in having wonderful parents who taught her right from wrong. “In general, there wasn’t much ambiguity at home. The rules were clear and I’m most grateful for that… I don’t like touch or when people hug me but at least I can say that now and decent people will understand and not be offended by it. I don’t pick up on nuances very well and often miss the secret language neurotypicals just seem to know instinctively… I now enjoy dry wit and irony, just like my father did, who I’ve a funny feeling possibly was on the spectrum.”

She continued: “Learning that I’m on the spectrum and that there are others like me has been amazing. I am not an alien, a freak or a misfit and while others operate differently to me, there are strengths on my side too: I am very, honest, dependable and reliable; conscientious and for better or worse, I tell it as it is.”

Enjoying her part-time job with WIT (thanks to work experience secured through the NLN), Carmel said: “It was a good way for me to get it because I wouldn’t be able to sell myself necessarily very well in interviews. But give me a chance and you will see how hard working and reliable I am when it comes to doing my job.”

Sharing a house at present with a view to having a place of her own in due course, Carmel can also drive, something she didn’t immediately relish. “But the way I saw it eventually is that driving is a set of rules and logical steps and that’s everything I like. Rules and logic and that suits me fine.”

Des McCarthy was both frank and optimistic when articulating his life with autism at the WDN conference.

Fellow speaker Des McCarthy (46), a father of three who works five days a week as a delivery driver for “a successful Tramore bakery”, has lived independently in Waterford City for the last four years. Similar to Carmel, Des was diagnosed with autism aged 43.

Des said being asked what it’s like being an autistic adult makes him laugh. “Honestly, I couldn’t tell you because I am autistic. I don’t know what it’s like not to be autistic.”

Looking back, Des said he has always felt “a little different to everyone else and I include my siblings in that; I’ve always been the black sheep of the family”.

His late diagnosis represented both “a blessing and curse. I’m actually glad it came when it did because I was never treated any differently by anyone, my parents, anybody, so I was trying to mix and grew up like everybody here. It was hard, I’ve struggled a lot since I was a kid. Primary school especially was quite hard because it was the early 80s, autism wasn’t a big thing at the time – of course it actually was – but you were looked at being ‘the thick’ or the slow learner.”

Secondary school was “a bit easier” for Des due to the technical subjects he studied such as metalwork, woodwork and technical drawing, all of which he enjoyed.

Working life has been “quite easy” given Des’s ease with the structure of the working day, even if certain jobs along the way have taken too much of him both physically and emotionally.

“A delivery driver’s not much of a career but when you’re autistic it’s ideal. It’s structured, it’s timed and I get to spend about eight hours a day on my own in a van – so it’s perfect – I don’t need to talk to anyone! I just literally run in, run out and say ‘good luck’ – some people don’t even know I’ve delivered, it’s that quick.”

Admitting that a lack of emotional skills has “plagued me over the years”, Des, now divorced, having been in a relationship for 20 years, articulated what his understanding of being a good spouse and parent was.

“You went to work, you earned your money, you paid the bills and made sure everything was done and that was what you were supposed to do. I did lack in the emotional support end of things, maybe the intimacy end of things and that did cripple and would cripple any relationship at the end of the day. But it forced me into a situation where I had to go on a journey of self-discovery and that’s how I got to meet Kitty (Galvin) and Mandy (Fox, both with the NLN) and it’s been brilliant so far. It’s an ongoing process but they recognise where the trouble is, where the kinks are and end up ironing out a lot of things. And I have to say I’m a lot happier in my life and in myself – and that’s really it.”