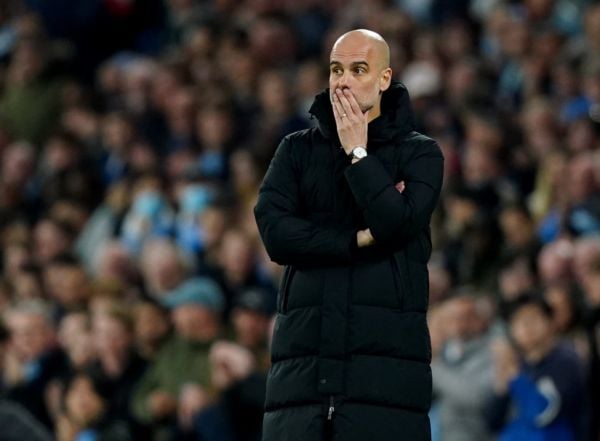 Pep Guardiola claimed any slip would cost Manchester City the title after his side recorded a critical 3-0 win over Brighton.

City scored three times after the break at a nervy Etihad Stadium to move back above Liverpool at the top of the Premier League.

The champions are in control of their destiny but, with six games still remaining and just a one-point lead, City boss Guardiola says there is no room for error.

“It happened three years ago when we won 14 in a row to be champions. Liverpool are going to win all their games but it’s not necessary to tell that to the players, they feel it. We’re competing with one of the best teams ever.

“We have just one month, maybe five weeks. After 11 months it comes down to one month. We will do everything we can to be the best in those games.”

Very proud to have played my 300th game for this club. On to many more pic.twitter.com/x4e9QkdBNy

Kevin De Bruyne, returning to the side after sitting out Saturday’s FA Cup semi-final loss to Liverpool, provided the inspiration for City’s breakthrough.

The Belgian provided the break to tee up City’s first for Riyad Mahrez, although the Algerian’s strike took a fortunate deflection. De Bruyne then set up Bernardo Silva to wrap up victory late on after Phil Foden added a second, also with aid of a deflection.

Guardiola added: “We recovered many things today and we were doing it against a side who beat Tottenham and Arsenal away. We were so aggressive, we were patient.”

The victory secured City’s qualification for the Champions League next season and, although that had long seemed a foregone conclusion, Guardiola felt it should be acknowledged.

He said: “Today, for the whole club, is one of the most important days of the season because mathematically we will play in the Champions League next season. People take it for granted but this is a huge success.”

The downside for City, who face Real Madrid in the Champions League semi-finals next week, was a potential injury to defender John Stones late in the game.

Guardiola said: “John felt something with a muscle, hopefully it’s nothing. He felt tight and didn’t want to take a risk and we’ll see in the next days.”

City had been frustrated throughout the first half by a resolute Brighton side.

“We defended really well in the first half but we’re disappointed with how we were on the ball. We missed too many easy passes and, in the end, their quality told, even though they had a bit of fortune with the first two goals.

“You have to put it in perspective and move on. There’s no shame in losing to them, they were better than us.”