‘My Fair Lady’ plays the Royal this week 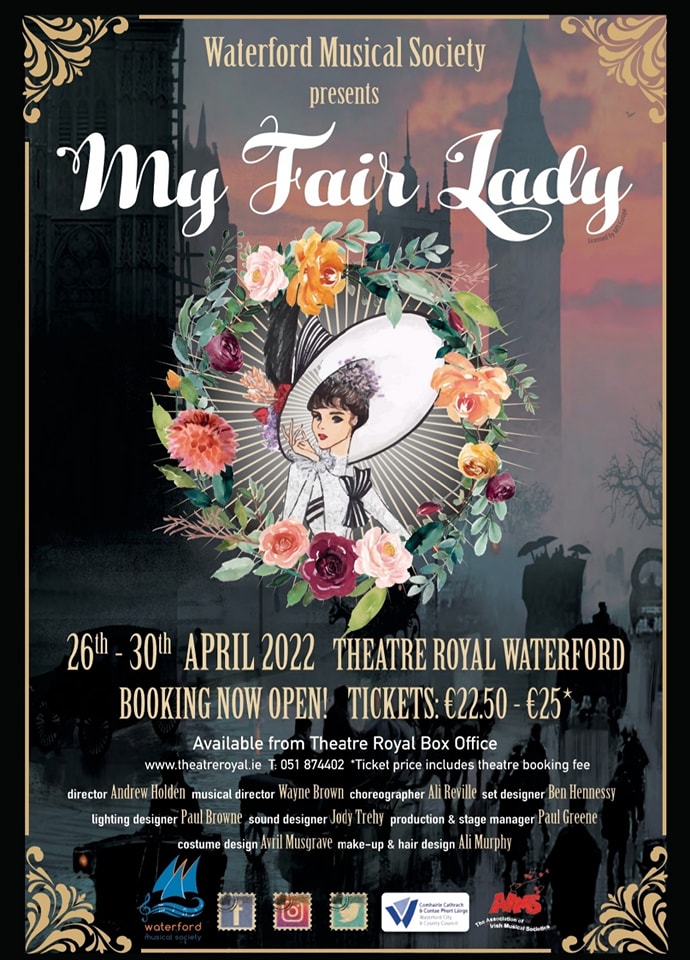 WATERFORD Musical Society makes its long-anticipated return to the Mall this week with ‘My Fair Lady’, Lerner and Loewe’s magnificent musical melodrama.

Everyone knows that the musical is based on George Bernard Shaw’s ‘Pygmalion’. However, what’s not so well known is the fact that Shaw’s ‘Pygmalion’ is actually based on the part in Ovid’s Metamorphosis when a sculptor named Pygmalion falls in love with his own statue of the perfect woman – probably the first man in literature who thought he could manufacture the woman of his dreams.

Cue Prof Henry Higgins and his determination to transform a Covent Garden flower girl into a lady of class and distinction. And…no…this is not a drama about misogyny but about a woman of resolve who transcends the barriers of class and misogyny and becomes the woman of her own dreams.

In many ways, the plot mirrored Jack Warner’s obsession with finding the perfect Eliza for his 1964 production of the show.

Warner believed that Julie Andrews, the young and unknown star of the Broadway and West End productions, had neither the fame nor the glamour for the $17m movie.

Audrey Hepburn – who really believed that Julie Andrews should have been cast – accepted the part because the next choice was never going to be Julie Andrews but Elizabeth Taylor who was simply dying to play Eliza.

Hepburn also accepted the role believing that she was actually going to sing the part. In fact, when she learned that her singing part was to be dubbed by Marnie Nixon, she walked out – although she did return the next day and apologised. ‘Just you wait, Henry Higgins’ was filmed with Hepburn in tears although Hepburn does actually sing part of the number. Audrey determined that she would never again play a musical role in which she was not allowed to sing.

The only person who actually sings in the film (most of Higgins’s role is spoken) is Stanley Holloway who plays the dustman Alfred P Doolittle. Even Freddie Einsford Hill’s voice is dubbed— despite the fact that actor Jeremy Brett had a fine baritone.

It seems that Jack Warner, in his pursuit of the perfect Eliza, mirrored much of the vanity of the play’s central character. “I don’t know what all the fuss is about. We’ve been doing it for years”, remarked Jack Warner. “We even dubbed the barking of Rin Tin.”

Despite the disappointment of her failure to land the part of Eliza in My Fair Lady, Julie Andrews had the last word when she collected the Oscar for her career-defining role as Mary Poppins. In her acceptance speech, Julie thanked Jack Warner for “making her Best Actress Oscar possible”. Ah Jack! …be careful what you wish for.

Waterford Musical Society presents ‘My Fair Lady’ this week at the Theatre Royal from tonight (Tuesday, April 26) through to Saturday, April 30. Don’t miss it! For more, visit https://theatreroyal.ie/event/my-fair-lady/