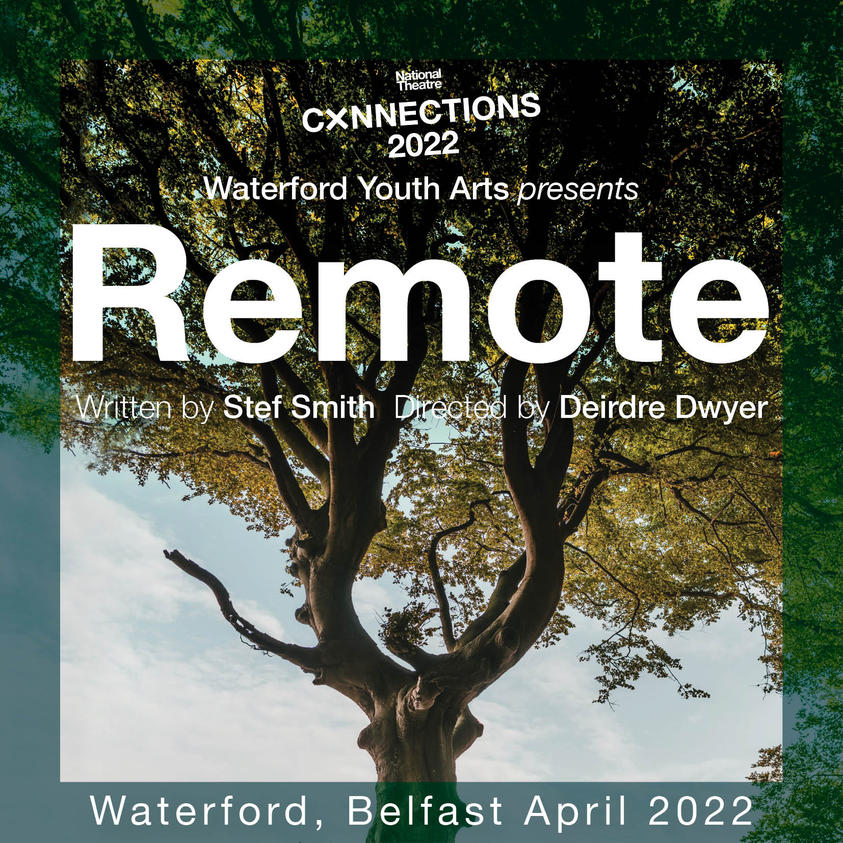 WATERFORD Youth Arts returned to Garter Lane for an Easter performance of Stef Smith’s ‘Remote’ – a topical play about power, protest and self-protection where the seemingly innocuous takes on greater meaning that is fundamental to the self.

Written by Stef Smith and commissioned by National Theatre London #NTConnections, Remote is directed by Deirdre Dwyer for #Connections2022.

The action of the play takes place in a park that becomes an everywhere space. Antler steps out of her front door and throws her phone to the ground. Then she climbs the tallest tree in the park. She doesn’t want to be found, not by anyone. Over the course of one autumnal evening, seven teenagers’ lives intertwine as they make their way through the park. And everything that seemed normal becomes extraordinary.

The players are largely developed for one aspect of their character. Antler (Caitlin Whelan) is the conscience of the storyline as she sits atop the tallest tree in the park and pours fourth on the world’s issues and her own problems in failing to deal with them. Recycling…environment…gender…race…violence…homophobia…apathy etc, are all referenced as the issues begin to action themselves on the killing fields of the park.

Thick-as-a-plank Blister the bully (Charlie Meagher) and his gang headed up by the street-savvy Finn (Leah Sheridan) and pack-groupies (Sadhbh Timmons Hennessy, Anabel Linnea and Robyn Libreri) work hard to make the park their space as they threaten and menace other youngsters for money, cigarettes and mobile phones. All teen issues that are the common currency of the violence that occurs in young people’s lives.

Various friends debate the issues of the day with Antler although with little success. From her perch-top, she sees the world as it is but her remoteness is also her disadvantage. Her voice of protest is lost as she battles to provide others with a way forward.

The immediate wins out as Blister and his butties dominate the world of the park through their power and menace. However, little by little, their influence diminishes as others – notably Desk (Rory Farrell) and Oil (Liam Gilshenan) find ways to chip away at the seemingly undefeatable Blister’s thugishness.

It’s an interesting piece although the play really needs a stronger ending. Acting values are strong and the ensemble cast slip easily in and out of their roles as chorus narrators and individual characters.

Deirdre Dwyer directs and moves the action of the story along at a nice pace through clever use of the ensemble as narrators. Deirdre does well to separate the various characters while accentuating one central feature of each character.

The cast of ‘Remote’ will now take their production to Lyric Theatre Belfast, joining youth theatres from all over the island of Ireland, for performances at Lyric Belfast.

An interesting evening at Garter Lane from Waterford Youth Arts.