Jade Donnelly: A Rose amongst the thorns

ON April 29, Jade Donnelly will take to the stage to compete for the much coveted title of Waterford Rose ahead of this year’s Rose of Tralee competition. Taking to the stage is not a new experience for her, as now at the age of 24 she has competed in beauty pageants in Ireland, Spain, Romania, and England, along with winning Lady of Ireland in 2018, and appearing on stage at the Chicago Fashion Week. However, taking to the stage in her own town requires a little grit and a lot of courage, as Jade told the Waterford News & Star. 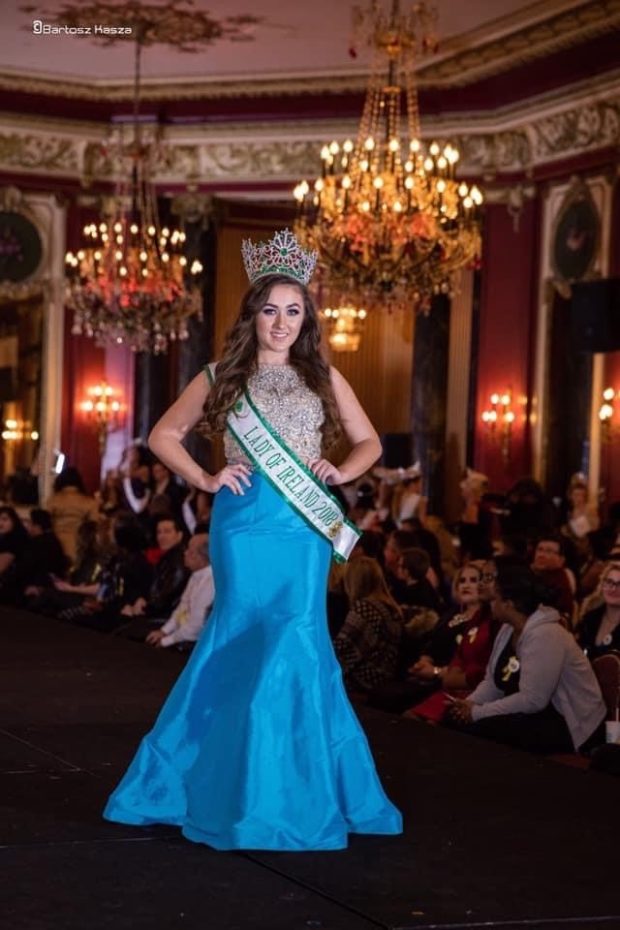 Jade said: “I do think my background has prepared me for this, and when I was doing the fashion shows, I became the ambassador for one of the charities involved, it was for suicide prevention, so I was Ireland’s ambassador for that. At the time, I was asked to share my own story on stage at Chicago Fashion Week in front of everyone, and although that was tough, I feel way more nervous about this because it’s on my own home-ground. I know that I will run into people from my past, that people will know my story but at the same time, I’m not ashamed of my story.”

Jade’s story is not unique, and perhaps that is what makes it so vital because the pain she hid for so long is experienced by young adults now, more than ever. While she is 24 now, her story begins in secondary school in Waterford.

“I was in Educate Together for primary school so that when I went to secondary school, there wasn’t really anyone that I knew. Not only was it an all-girls’s school when I had come from a mixed school, but it was girls who didn’t know me and who thought I came from, what they called ‘the hippy school,’ it was all they needed really to start bullying me.”

While Jade had her immediate friend group, the bullies attempted to distance her from others by putting her down, knocking her self-confidence, sniggering openly about her, spreading lies and rumours, and increasing in severity until she feared for her life.

“As things went on, there were threats of physical violence, encouraging me to kill myself, there was a lot of online bullying, people staging photos pretending to be me, more death threats came as a time went on. It was disgusting and it was everywhere I turned because in school- it was there, at home- it was on my laptop or my phone, it was horrible. I turned to self-harm as a result and that affected me for 10 years, 10 years where I used self-harm as a coping mechanism.”

The friends Jade had in school distanced themselves from her, because the bullying was sustained, relentless and carried a real threat of spreading to those who associated with Jade. While her mother, Rebecca was not aware up until this point, the bullying became more difficult to hide because Jade began asking her mother to collect her from school at lunchtime, she began coming home from school with symptoms of being sick, and she showed increasing reluctance to go to school.

“I hid it for a good while, but then my Mam knew there was something else going on. There was one day where a girl attempted to beat me up in town and I had to call my Mam to ask her to come to get me because someone had hit me. This girl wasn’t even in my school, she didn’t even really know me but the rumours spread about me had taken hold to such an extent that this was happening.”

Jade left her school and at the beginning of Transition Year, she enrolled in Stella Maris, Tramore where she knew nobody and where she could have a fresh start. She credits this decision as being what ultimately saved her.

“It was the best thing I could ever have done. The people who were bullying me were part of a large group from three schools and Tramore was the only school which had a place for me and where there was nobody enrolled that was part of that group of people. Everyone was so welcoming and kind, it was Stella Maris first and then the schools combined to become Ardscoil na Mara. I made great friends and I was so much happier.”

Recently while out for dinner, Jade was served by the girl who attempted to attack her in the city, the girl avoided eye-contact at all costs. Similar situations have taken occurred where Jade has passed her bullies on the street and they lower their heads and avoid contact.

“Removing myself from the situation was what I needed. At the time I went to my Mam and said I couldn’t go back there, and she said ‘ok, let’s do it, let’s find another school’. There was no second guessing, she always supported me. When she knew I was self-harming, she said ‘let’s get help’ and I started with the Self-Harm Intervention Programme and it was really about breaking the habit, the addiction, and finding other coping mechanisms.”

Jade was so consumed with making it from one day to the next, and she spent so long defending who she was that she lost sense of that identity and had no opportunity to explore it. Yet when she realised she was gay, it came as no surprise to her family.

“I think I probably always knew but I was probably in denial. When I was 17 or 18, I said ok… maybe I’m bi-sexual, and I experimented with that thought. I was pregnant at 19 so I had my baby when I was 20 and split with my son, Henry’s dad during the pandemic. I remember thinking ‘I don’t think I’m into men at all’. I’d say my Mum knew before I did.”

Taking to the stage in the heats for the Waterford Rose means so much more to Jade than the glamour and the elegance; it means being gay, having tattoos, being a single mum, and not fitting into the stereotypical mould which society often wants us to fit into. Walking onto the stage with a female escort, Jade wants to allow others to see themselves represented, for people to know that it is not just straight cis women who can be inspirational, but all women. 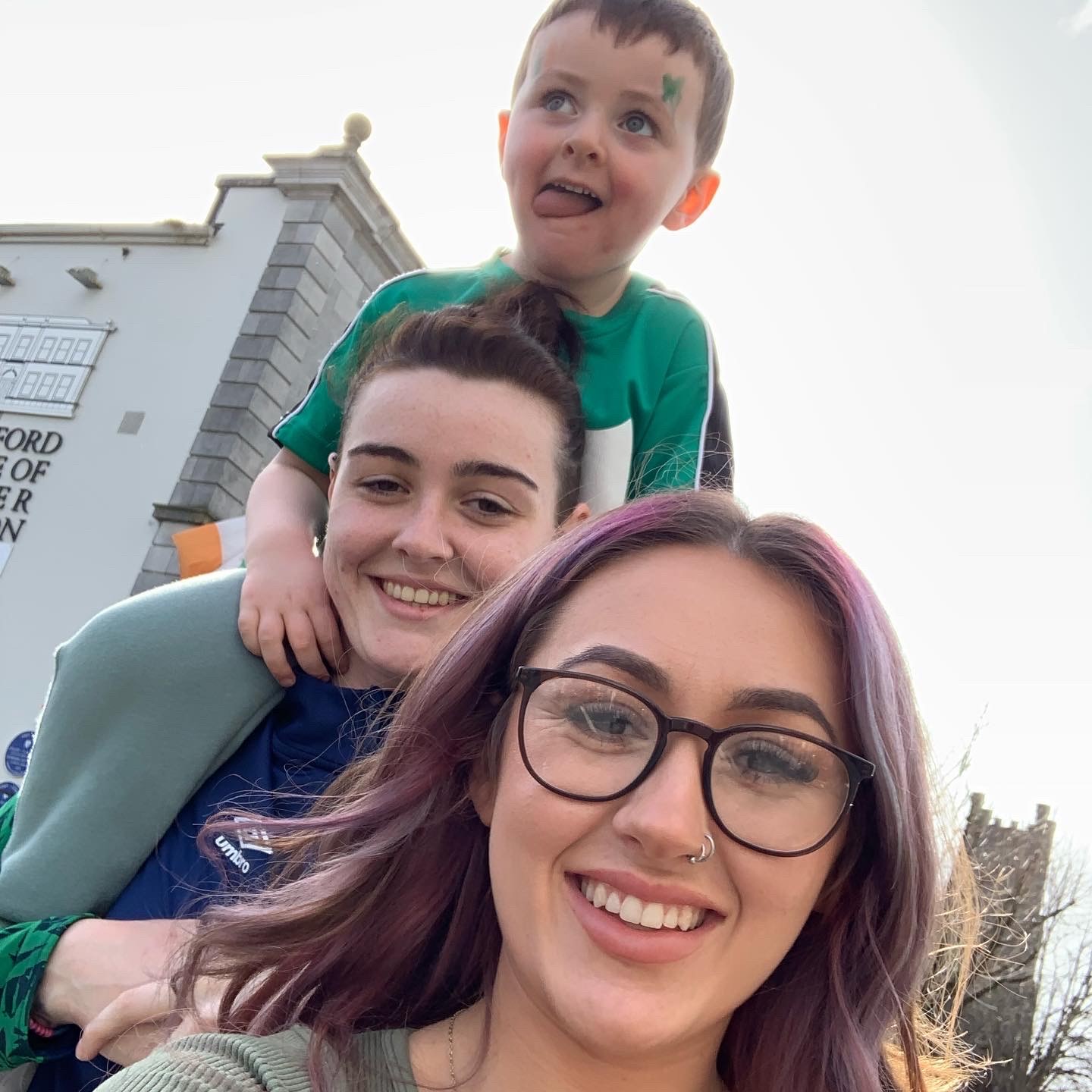 Jade will be cheered on by her son Henry, and her partner Sarah

“Recently, the rules of the Rose of Tralee have been changed to allow trans women to compete. I think it’s a good reflection of how much Ireland as a whole is evolving and realising that trans women are women, they’re not men dressed up as women, it’s disgusting that people do think like that.”

At home in Kilmacow, Jade has a home filled with strong female role models, including her mother Rebecca who is a creche-owner locally. Rebecca fostered her youngest daughter who is Nigerian when she was seven or eight, having known her from the creche and at the age of 21 she is firmly part of the family. Their family home is built on unconditional love and support and this has fed into Jade’s career plans.

“I’m opening the Gay Café, an LGBTQ+ friendly café which will be as inclusive as possible for all walks of life. I want to have it as a safe space because not all people have a safe space, not everybody’s home is their safe space. I’m doing a course with the Enterprise Board at the minute to try to get that up and running. I am hoping for a building in the Cultural Quarter in O’Connell St but I haven’t found a suitable premises yet. If there are stairs, I want there to be a lift, I want it to have same-sex bathrooms, to have a safe space for women who are breastfeeding, or who have to administer hormones, I want to have pronoun badges as you walk in the door, lines and arrows on the floor for people who are anxious about entering a room. It will be a hate-free place”

On April 29, Jade will compete in the heats for the Waterford Rose, sponsored by Beautorium.