View from the Green Room: Snap, Crackle and Pop on Joanne’s Prosecco Express 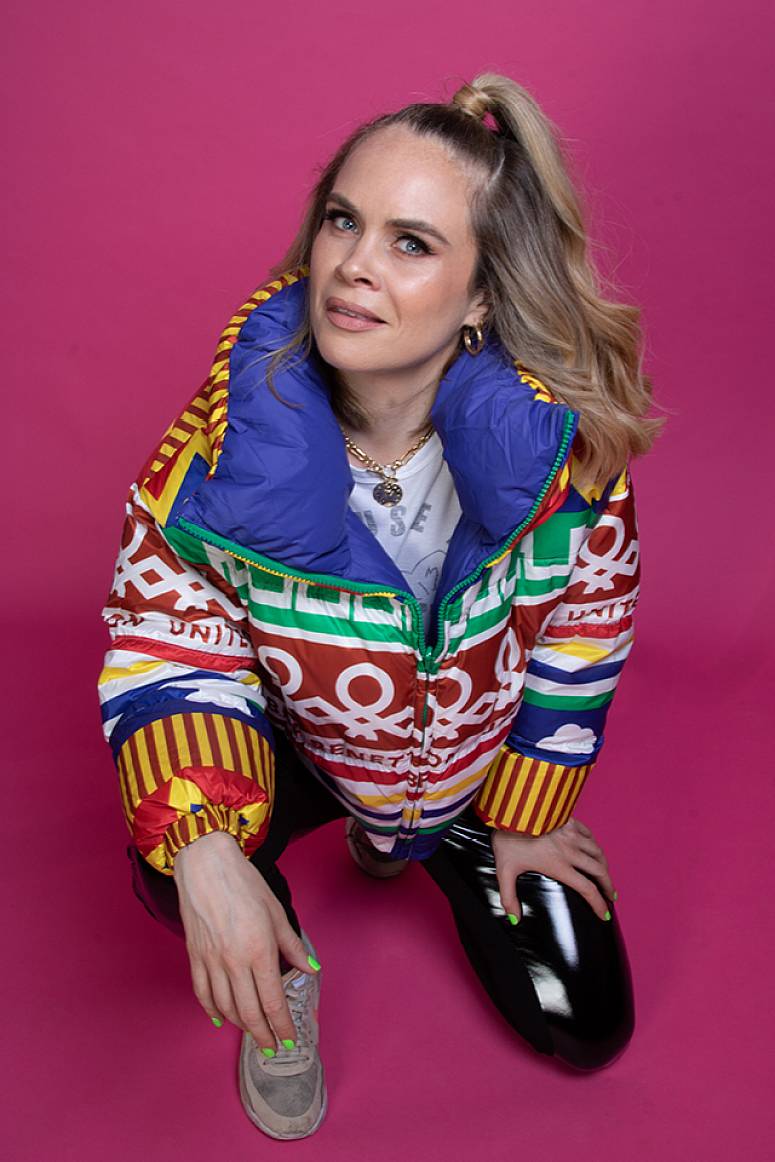 THE excitement on the Mall is electric. The Foyer is buzzin’ and the noise of the exclusively thirty-somethin’ female audience is Richter-scale deafening as their favourite comic Joanne McNally hit the boards. The show has been sold out for months and Joanne is not going to disappoint the gals from the noughties. Confident, assured, pacy, intense and gossipy, the hour-long performance zips along from the comic who is a combination of smartarse and sage.

These kidults have all grown up together and Joanne confirms every prejudice they’ve ever felt – especially towards men. Fumbling and insincere lovers have the edge over staid, tried-and-trusted mother-in-law gags as the audience descends into howls of appreciation when male teenage awkwardness on damp grassy banks is recalled. There’s a feeling that many of the sisterhood have ‘been-there-and-bought-the-tee-shirt’.

‘All the milestones,’ she reflects, ‘have been other girl’s milestones.’

“I mean,” says an incredulous Joanne, “wha’ was thaaaat all about,” in that twistin’-the-night-away experience (don’t ask!) “English fellas want you to watch them while they’re in action,” says she as she regrets not being able to text her friends when dawshing Darren is on the job. She confides that she solved her texting conundrum one night while making love to a blind chap with no socks. The audience dissolves at the audacity of the suggestion. I mean… what exactly was she texting?

There’s an underlying feeling to Joanne’s narrative that, without noticing it, life has passed her by as she was shopping in Zara and queuing for a dressing room. “All the milestones,” she reflects, “have been other girl’s milestones.” Like engagements, weddings, births, communions and she’s not too happy about it as she works her audience.

An envious woman does better interrogation than the CIA. “Who are you?” this comic Facebooker wants to know, “and what’s your relationship status?” When she finds she has a fiancée, she walks away in disgust “fockin’ bitch”. When she finds a woman who’s married for the last 10 years, she wants to know what she’s done wrong to deserve this?

She meets and greets Dave and immediately establishes him as a frenemy. “So…,” says she “how did you get in here?… and why are you here, anyway?… relationship status?… we must meet up after the show!” The sisterhood just love this and are bang-in-tune with her line of thought as she chases a lad who can afford a four-bed semi-D. Emotional insecurity is an inclusive register that signs everyone up but Tinder, alas, doesn’t really cut it for our comic Tinderella – especially in Waterford. “Other people see red flags but I wouldn’t even see red bunting,” says the comic with the manic eyes as she warns “and don’t get me started about transsexual vegans.”

Luckily, Joanne’s got a couple of drinking butties that come with apparently more baggage than a RyanAir luggage rack. Denise is about to hit forty and become anonymous and is also unsure about having children – the fact that she already has two is neither here nor there – and goes maaad when she can afford a babysitter at £50/pop. At that price, intoxication seems a pretty good option. And then there’s poor old Carol, confused feminist and a vegetarian – or maybe that was a bisexual??? It’s hard to catch everything.

So… she’s back to Mammy in Dublin for the Lockdown. Homecoming awakens thoughts of mortality and she hears a funeral in her brain.  No one lives forever and Joanne would like to have a child to hold her hand while exiting stage-right. Mammy, meanwhile, is on a somewhat different tack as she wants to experience life’s joys before she propels a kick at that infamous bucket. Two strong-willed women on the one premises is no recipe for inner content, particularly one that has been into polyamorous relationships. For the uninitiated, polyamory is a form of ethical non-monogamy that involves committed relationships between two or more people — typically romantic relationships – sort-of-like cakeism i.e. having your cake and eating someone else’s as well.  Yeh… I know… I know… I know… I had to look it up!

In fact, there was a lot more I could have looked up as well, as Joanne journeys around FB, TikTok, Insta, Twitter et al with abbreviations that left me reeling and feeling like a donkey looking under the bonnet of a helicopter.

“Everything in the world is about sex,” says Oscar Wilde, “except sex.”

Having journeyed with the hilarious and brilliantly theatrical Joanne McNally on her Prosecco Express, I’m not so sure.