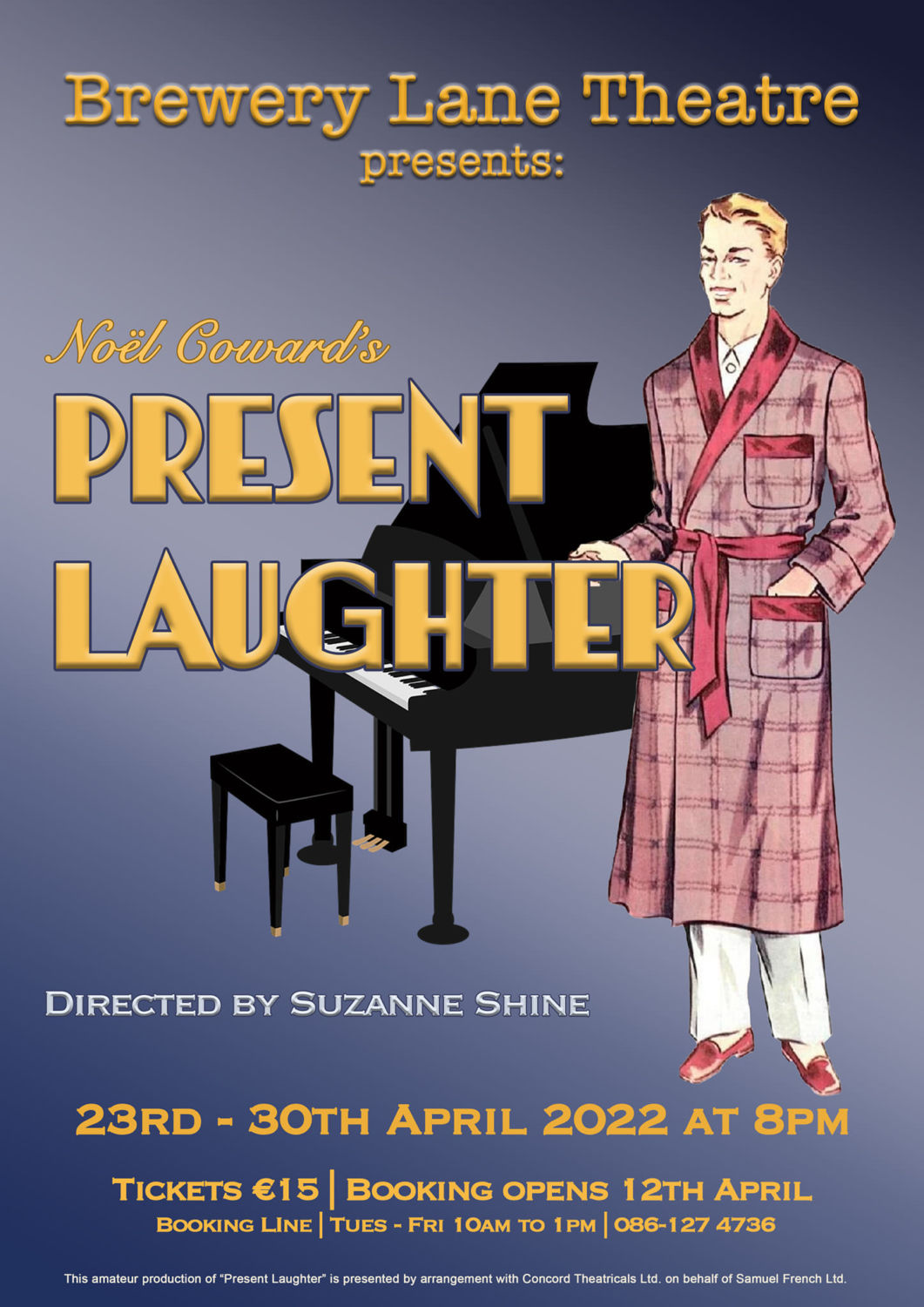 BREWERY Lane Theatre never shies away from the classic big-cast dramas of theatre greats and tonight is the turn of Noel Coward’s ‘Present Laughter’. Casting a period play that runs for over three and a quarter hours and has a cast of 11 would challenge any large city drama group and it’s a tribute to Brewery Lane Theatre, Carrick-on-Suir, that the group could mount such a production.

Everything that is good about Am-Dram is here with talented actors and a dedicated team that stage such large-scale productions on the limited stage-space of Brewery Lane. Writer/broadcaster Ned Sherrin places the play in context: “Present Laughter is one of Coward’s four great comedies of manners, along with Hay Fever, Private Lives and Blithe Spirit. It presents a masterly, exaggerated picture not only of the playwright but of his whole household, his court, his admirers, his lifestyle and his era.”

‘Performances – as always in Brewery Lane – are just spot on’

This production’s triumph is in recreating, and making relevant, that whole era of privilege and vanity that placed writers and actors such as Coward front and centre in a society that pandered to them. It’s a scene that is regularly repeated on the Graham Norton Show where vacuous celebrities believe that whatever words pass from their lips are of importance to the rest of us.

Wit and caricature are the trump-cards of this overlong play that screams for a modern edit. The final scene, to take just one example of excess, features three exit-cameos from two servants and a secretary that, despite being well acted, add little or nothing to the narrative of the play.

The plot depicts a few days in the life of the successful and self-obsessed light comedy actor Garry Essendine (an anagram for “neediness” and a caricature of Coward himself) as he prepares to tour a play in Africa. As farcical events play out, the self-obsessed actor has to deal with women who want to seduce him, humour his long-suffering secretary and his wife, cope with a crazed young male playwright that obsessively loves him, and overcome his impending mid-life crisis as he enters the dreaded forties.

Theatrical spats, crossed-wires, offstage rooms concealing girls in pyjamas, will-he-won’t-she subplots, real and imagined affairs, a doorbell that never stops ringing, snifters that can’t be left alone, frantic comings-and-goings with flustered arrivals and departures is the order of the day. Essendine plans to escape all his problems, by fleeing to a drama tour of his latest play in Africa, all end in disarray as he finds that the entire cast have also booked a passage to the dark continent. The only resolution is to remain with his wife Liz and let the rest of them off.

Another good night – if somewhat overlong – in Brewery Lane with an excellent and large cast and strong direction from Suzanne Shine.

View from the Green Room: Magnificent My Fair Lady