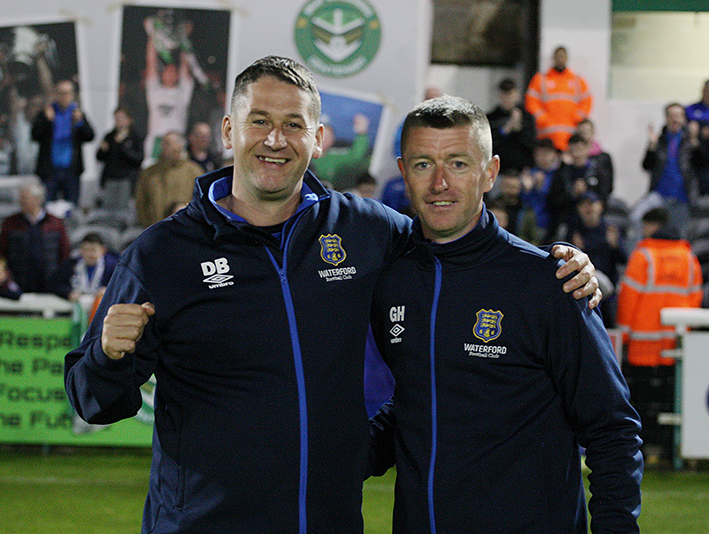 A third win on the bounce for the caretaking Waterford FC management team of Gary Hunt and David Breen as the Blues sit in third spot in the SSE Airtricity First Division table with a 4-1 win over Bray Wanderers at the Carlisle Grounds on Friday night.
Speaking to the Waterford News & Star after the game, Hunt said, “It’s a great win. Obviously the two goals from Louis Britton at the end put the polish on the result. We came up here on the back of two victories and we wanted to continue that winning run. I’m delighted for the lads that they’ve been able to do that.
“It’s an excellent finish from Phoenix (Patterson) for the first goal. To be fair if you look at the build up to it. It’s a cross into the box and we’ve been speaking to the players about that. Louis pulls onto the back of Daniel Blackbyrne and as you said, it’s a fantastic finish. It’s almost his trademark now.”

‘THE PERFECT PLATFORM’
“I think that you nearly know the end result when you see him cutting inside. It’s a great goal. I think that Eddie Nolan had a great chance to make it 2-0, and if he mishits it, I think it goes in. He probably hits it too clean, but I suppose Eddie’s main job is to keep the ball out the other end. Anything else is a bonus.
“Louis (Britton) had a chance before we got the second goal, and he probably should have scored if I’m honest with you. We go get the second goal from Shane Griffin, and I think that really gives us the platform to go on and win the game.
“I know that it was a little bit shaky when they scored, but the lads responded well to get two more goals. We managed to see the game out, which is good for us. Just to touch on the goal that we conceded. We’re a bit disappointed with that because on the back of two cleansheets we wanted another one.
“We’re priding ourselves that if we don’t concede that we’ll hopefully win games. That’s the disappointing thing so we’ll look back and see how we can manage that situation better going forward. We’re lucky in a sense that it hasn’t cost us points tonight, but we have to be careful going forward.
“I was delighted to see Nigel (Aris) get on the field and get an assist in the end, but Louis at the end showing incredible energy levels to chase down in on goal and make up for that error earlier in the second-half. For him to put away two goals is brilliant, which gave a really good look to the scoreline.
“He has been doing well for us and getting into those positions. In Wexford, the keeper has pulled off two great saves to deny him a goal so it’s good to see him get two here. It’s good to see him score against Athlone and continue it tonight. He is in good competition with Cian Kavanagh, who missed this game through injury.”

‘GOOD PERFORMANCE’
“I think that overall it was a good performance and the lads were at it today. The pitch is in fantastic condition here and it allowed us to play. We had to weather a little early storm for the right to play, but once we did, we got on the ball and we shifted it quite good. This will give us the platform to get up the pitch, and we once get it into those danger areas the likes of Phoenix and Louis can turn those chances into goals.
“I must mention the supporters here this evening. They were fantastic as well. They’ve really gotten behind us the last number of weeks and I know the players and all of us involved are appreciative of that. We have Cobh next at home where we’ll be hoping to keep out run of results going. Hopefully the fans will turn up to see it.”