The pressure is on both sides in Walsh Park clash 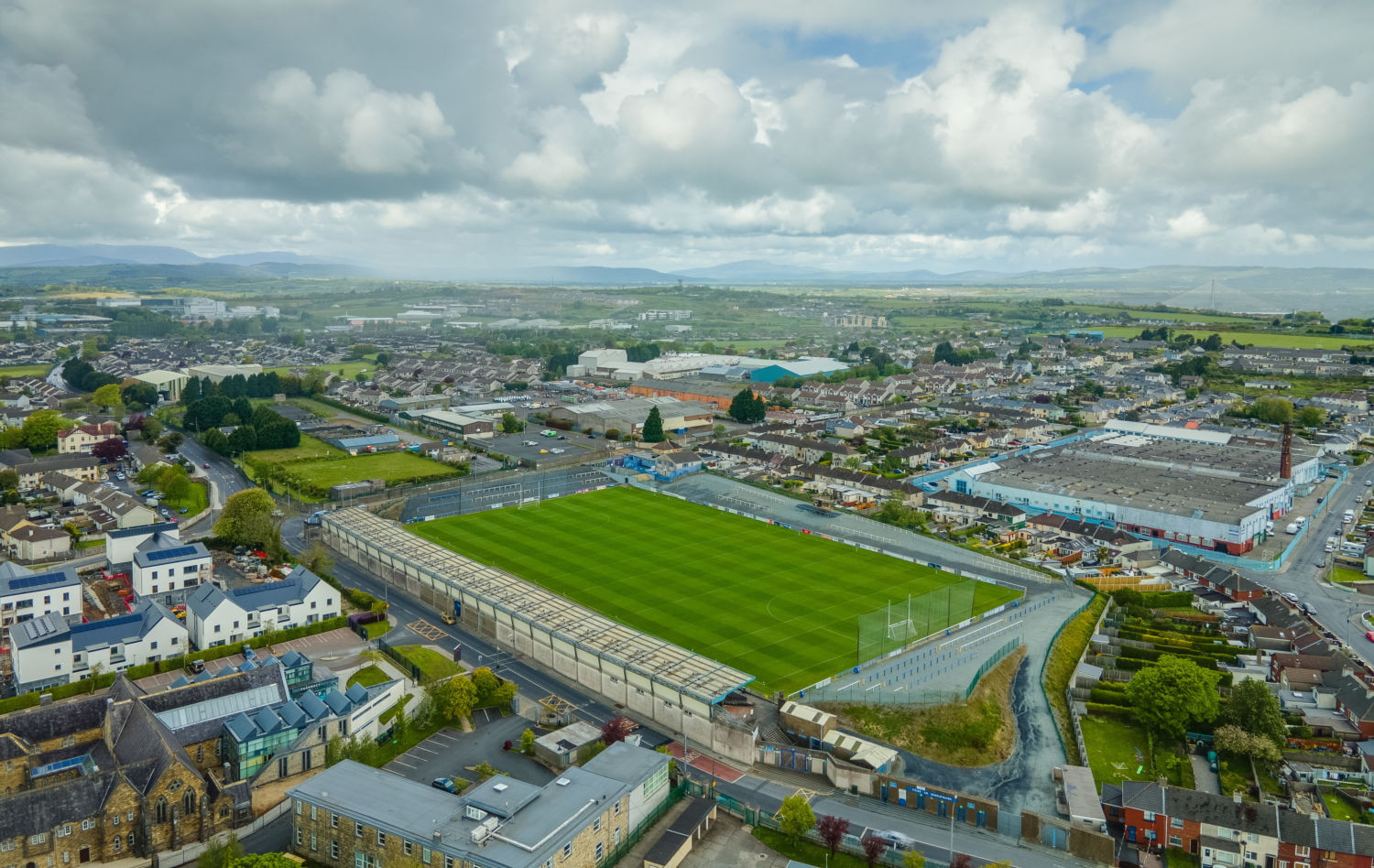 Walsh Park hasn’t played host to many championship meetings between Waterford and Cork but for both teams Sunday’s meeting is a massive one. Photos: Inpho.

What an eventful four weeks it has been in the Munster championship. Limerick have won their three games to date and regardless of their result against Clare in Ennis on Sunday they are set to defend their Munster title based on their head to head victory over Waterford and their superior score difference.
Waterford could still face Limerick in a Munster final should Clare lose to Limerick on Sunday and Waterford account for both Cork and Clare in their remaining two games.
There are many other scenarios attached to next Sunday’s results but for Waterford championship survival can hinge on the result of Sunday’s game alone and mindful of that Liam Cahill and his selectors will not be looking beyond getting the right result on Sunday. A win over Cork will guarantee third spot into the preliminary qualifiers against the Joe McDonagh Cup finalists, defeat would leave Waterford looking for a win in Ennis and a defeat for Cork in their final game against Tipperary.

A KNOCKOUT GAME
To all intents and purposes this clash with Cork is a knockout game and has to be approached as such. Any supporters thinking that it is a foregone conclusion, given Waterford’s big league final win over Cork and Cork’s championship defeats by Limerick and Clare, are not living in the real world.
Down through the years there have been many notable championship clashes between Waterford and Cork. Waterford followers of an older generation will always recall the Munster final victories over The Rebels in 1948, ’57 and ’59 while a younger generation will recall the rivalry of the noughties that saw two further Munster final victories over the same opposition in 2004 and 2010 and the other great championship clashes of that period. More recently we had the dramatic All Ireland semi-final victory of 2017.
Despite having suffered some hefty defeats at the hands of our neighbours, such as the in the Munster finals of ’82 and ’83, the rivalry between the counties has been a healthy one and has produced some incident packed games, none more so than the championship clashes in Walsh Park.
Back in the sixties and seventies Waterford had agreements with Tipperary and Cork that first round Munster championship games between the counties would alternate between home and away venues. In 1966 Cork beat Waterford in the Munster final in Limerick on a score of 4-9 to 2-9, it was Cork’s first Munster title since 1956 and expectations were that it would be the first of many. The following year the teams were drawn in the first round of the Munster championship and the records showed that Waterford had travelled to Cork on the last occasion the sides had met in a first round clash.

THRONGED WALSH PARK
The Munster Council were not too happy with Waterford’s insistence that the game be played in Walsh Park as the counties would be expected to bring at least 30,000 to Thurles but that was the agreement. A thronged Walsh Park, with a crowd far in excess of what will be allowed on Sunday saw the defending All Ireland champions exit the championship in an incident packed game. Cork finished the game with fourteen players following the sending off early in the second half of fullback Tom O’Donoghue but either way Waterford were more up for it on the day and scored a 3-10 to 1-8 victory. Seven years later Cork were back in Walsh Park again for a first round tie and again finished the game with fourteen players following the first half sending off of goalkeeper Paddy Barry following an incident involving himself and an umpire On this occasion Waterford’s numerical advantage proved decisive as they went on to a four point victory.
The following year, 1975, Cork were back in Walsh Park for the third time but on that occasion they were going to make no mistake and cruised to a crushing 4-16 to 0-6 victory over what was virtually the same Waterford side that had defeated them the previous year. Cork went on to take the Munster and All Ireland titles. 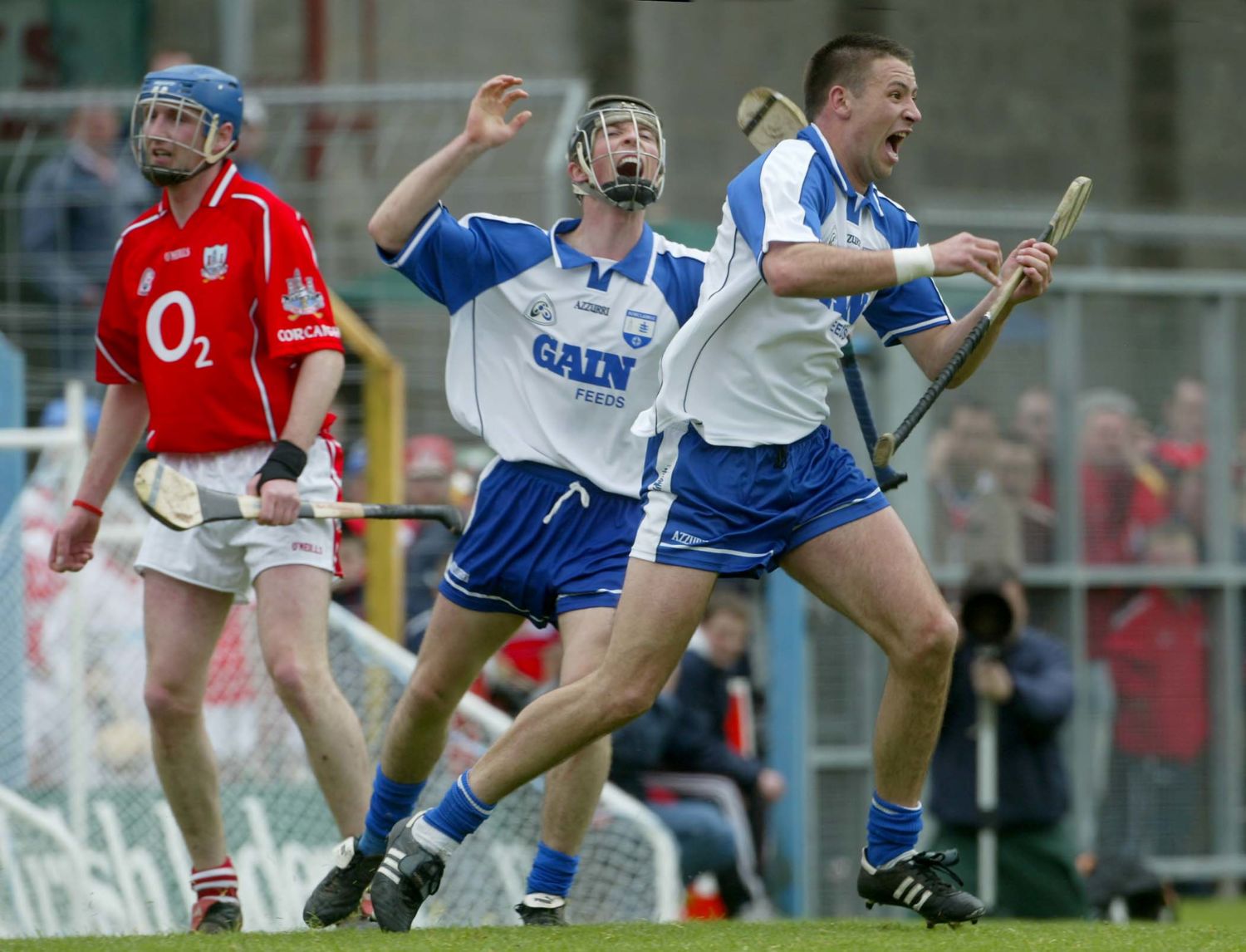 Waterford and Cork have a long history of epic meetings, many of them coming in the first decade of this century. Here was Dan Shanahan after scoring a goal against Cork in 2005.

Sunday next will see Cork in Walsh Park for a senior championship tie for the first time since that 1975 clash and for the first time Waterford will go into the game as favourites on home soil. When the Round Robin system was introduced in 2018 Munster Council refused to allow Waterford to play home games in Walsh Park so the games against Tipperary and Cork were played in Limerick and Thurles, as neutral venues, respectively. Waterford suffered a 1-23 to 1-20 defeat to a Cork side that went on to beat Clare in the Munster final. In 2019 Munster Council conceded that Waterford could play home games in Walsh Park but Waterford travelled to Pairc Ui Chaoimh to play Cork and lost out on in a dead rubber on a score of 2-30 to 2-17.
The arrival of Covid saw the championship shortened to a knockout system with the beaten provincial finalists given a second chance through the back door. Waterford, now under Liam Cahill took advantage, beating Cork in the Munster semi-final by 1-28 to 1-24 before losing to Limerick in the Munster final and bouncing back through the back door with a notable win over Kilkenny before losing to Limerick in the All Ireland final.
Last year, having lost to Clare in the opening round, Waterford hit back to qualify for the All Ireland semi-final, losing again to Limerick. Cork, on the other hand, qualified for the All Ireland final, losing heavily to Limerick.

REBEL UNDERDOGS
Waterford’s championship win over Cork in 2020 and the recent League final victory over the same opposition would seem to suggest that Waterford have gained an edge over Sunday’s opponents but this is the same Cork team that reached the All Ireland final last year and has changed little in personnel from the sides of 2018 and 2019, in which year they were Munster champions. Things have not gone well for Kieran Kingston’s men this year but they cannot have become a bad side overnight and though they are coming to Waterford as underdogs on Sunday they will also be coming as an experienced side knowing that a win can still keep their championship campaign on the road.
Against Clare, in Thurles, Cork fielded what was basically the same team that faced Waterford in the League final with just a couple of changes in personnel. What was noticeable was the number of positional changes made by Kingston in an effort to freshen things up, such as the moving of Mark Coleman from centre back to midfield with Ciaran Joyce taking over at centre back and Darragh Fitzgibbon moving from midfield to centre forward. Overall very few players retained the positions held in the league final and against Limerick in the championship. Like every other team Cork started strongly against Limerick in Pairc Uí Chaoimh but were ground down in the closing stages. 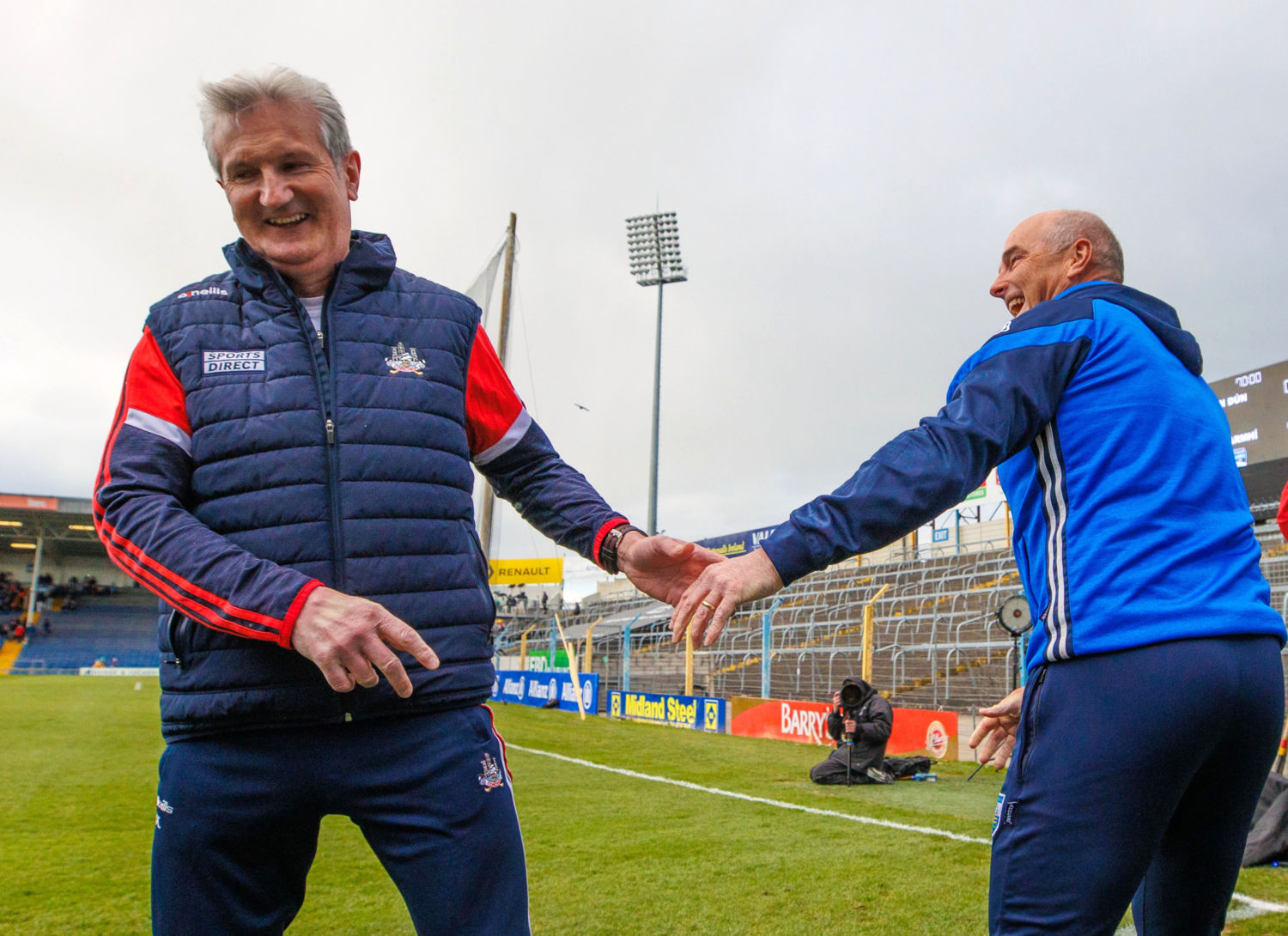 Cork’s manager Kieran Kingston and Waterford selector Stephen Frampton share a lighter moment before their recent NHL Final in Thurles. The pressure is on both camps on Sunday in Walsh Park.
Waterford cannot afford a slow start against Cork on Sunday. The home side will need to impose its will from the start and not allow Cork to gain in confidence. The three weeks since the Limerick game has given Liam Cahill much needed time to assess his defensive options in the absence of Iarlaith Daly and also the situation regarding the fitness of Jamie Barron to go full tilt from the very start of the game. One can expect that defensive adjustments were looked at in the training sessions behind closed doors but when it comes down to selection we are unlikely to see any radical change in personnel from the defence that faced Limerick.
It is up front that Waterford have the winning of this game. Cork have been consistently vulnerable at the back and if Stephen Bennett, Dessie Hutchinson and Patrick Curran get good ball the goals will come.
On Sunday last Tipperary were given no chance against Limerick but for sixty five minutes the All Ireland champions were made work hard to gain the upper hand. Tipp tradition and pride were never going to allow them to go quietly out of the championship. It will be the same with Cork on Sunday. They will come with all guns blazing and Waterford must be prepared and meet fire with fire. The form book goes out the window, it all happens on the day and Waterford have the players to make it go their way.