“This is the biggest game in my tenure here” 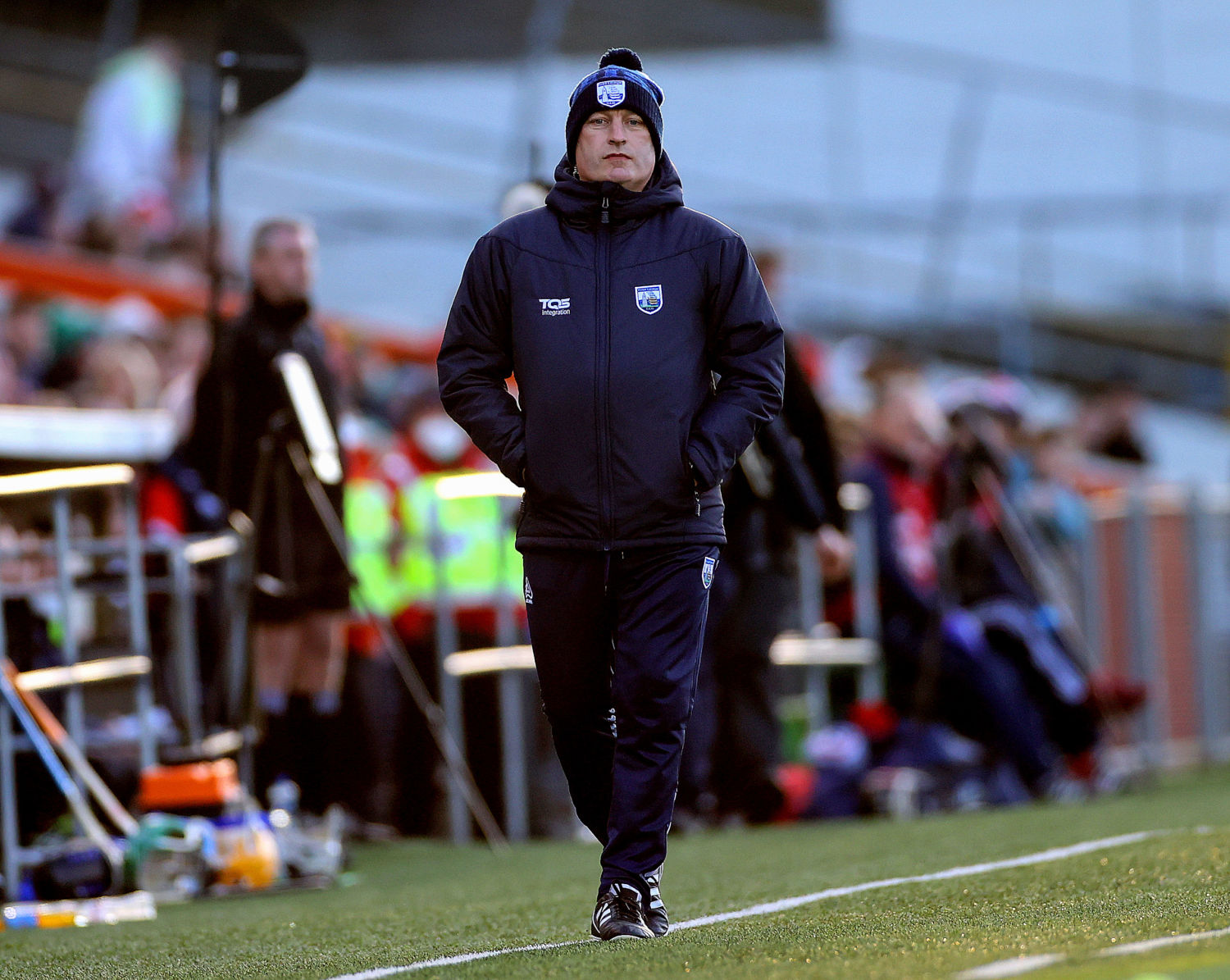 Liam Cahill wants the Waterford supporters to blow the roof off Walsh Park when Cork come to town on Sunday.
“It’s a championship defining game for us. We really need to put our best foot forward. This is the biggest game in my tenure here to be straight and honest about it. That’s why I’d really appeal to the Waterford people to pack out Walsh Park next Sunday. I’d really appeal to them to travel in their droves and keep their voice good and loud. I know they’ll require us to give them something to go off. We commit to that. I commit to it and the players will definitely commit to it on the day. If our players are giving the supporters something to go off, they need to come behind us on this occasion because this launchpads our season if we can get over the line.”

WARY OF WOUNDED REBELS
He is wary of a wounded Rebel side who are coming off three straight defeats. “Cork are going to be coming absolutely fighting for their lives and they have to. There’s a lot been said about this Cork team about what they’re not and that has to hurt and that has to inspire a performance. It’s unfortunate that we’re the team that’s going to meet that backlash. We have to be equal to that and better. Definitely the crowd on the day will help us in our own backyard.”
He knows these Cork players inside out from his time in charge of Tipperary underage sides. “Cork is a really proud hurling county. I’ve seen all those players all the way up along and they’re really good players. The one thing I always say is form is temporary, but class is permanent. There’s an awful lot of class players in that Cork squad. They’re not going to go this campaign without taking the scalp of somebody along the way. I’m just really conscious of what’s coming down the tracks. It’s my job to have the players ready for this. We’re going to do everything in our power to make sure that we’re right on the day to get the job done.”

‘A MASSIVE LOSS’
Iarlaith Daly won’t be part of his plans for the rest of the championship. An ankle injury against Limerick cut his summer short. “Iarlaith is a massive loss obviously. He was coming into real good form, two years’ experience under his belt, looking like a steadying influence for one so young in our back line. Just really unfortunate for Iarlaith to sustain that injury against Limerick. Bitterly disappointed for him and I know he is bitterly disappointed himself. As a team, we always have the mantra of next man up. One man’s loss is another man’s gain as we say. We just have to plough on and try and put that behind us.”
The Lismore defender is set for a long spell on the sidelines. “With the way this championship is coming, if you pick up any sort of injury, the time just isn’t on your side. Unfortunately, Iarlaith’s injury is a 12-week injury which rules him out of the whole of our campaign. It came at the wrong time for us and for him. We wish him well in his recovery and I’m sure he’ll put a real good campaign together with his club over the course of the summer.” 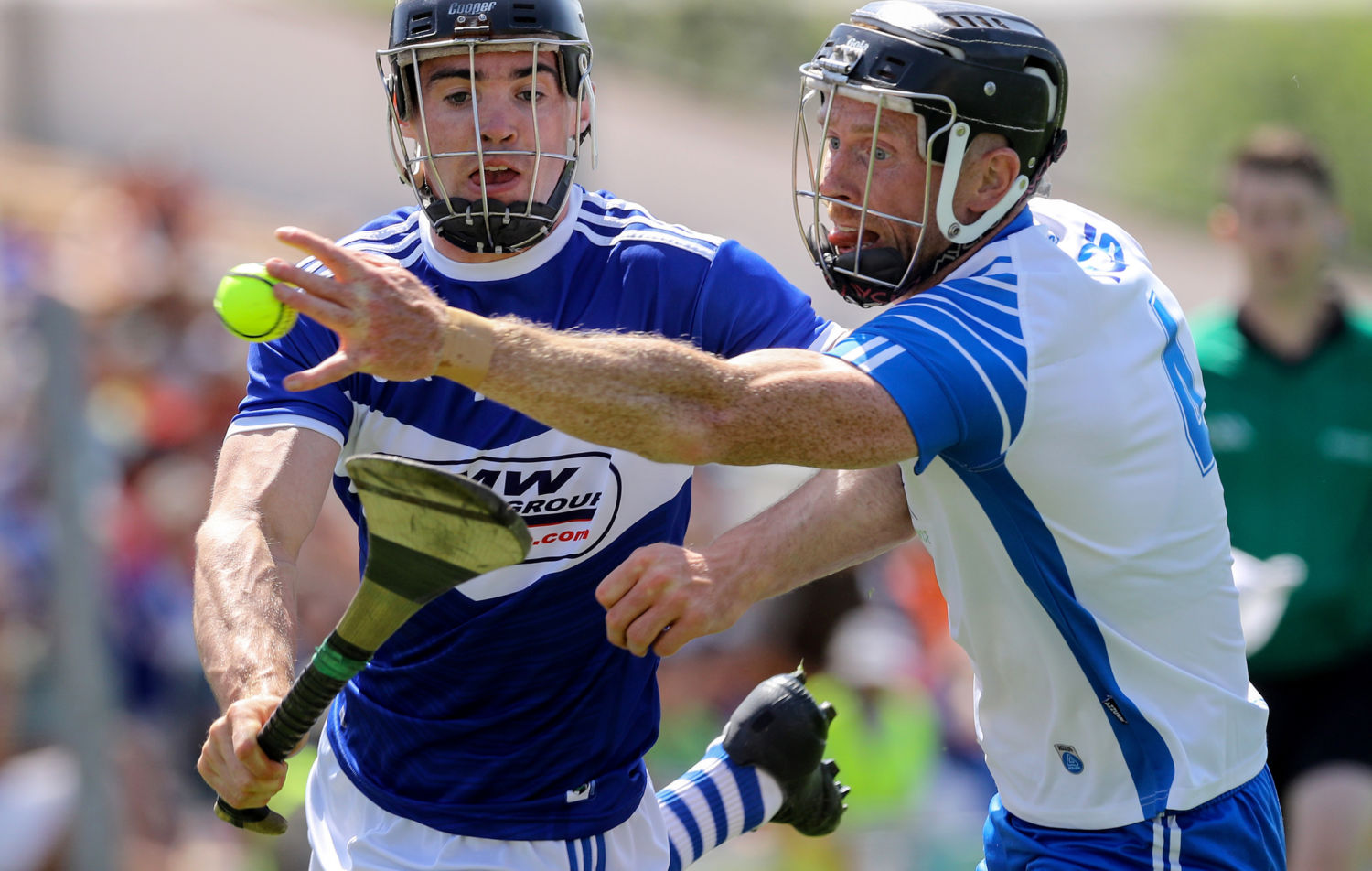 All-Ireland club winner Ian Kenny (pictured above) is back in contention after missing out on the matchday squads against Tipperary and Limerick. “Ian is coming back from a groin injury over the last couple of weeks. A little bit slow, the nature of the injury, but we’d be very hopeful that Ian will be back in our plans for selection for Cork which is vitally important. Another key player with massive experience that will give us a lot of options at the back. When it boiled down to it against Limerick, we hadn’t the same cover that we would have liked on the day.”
He still reckons that they didn’t deserve the two points away to Limerick three weeks ago. “That was my initial feeling after the game and I stand by that. We just didn’t do enough consistently throughout the game to warrant the win. We hurled in starts and stops really. At times, we looked really good and then there were times it looked we all switched off together. Against a team the quality of Limerick, you pay the price. We were hit for seven scores in a row in the second half and that really hurt us. I don’t care what team you are, it’s very difficult when you’re hit with seven scores, one after the other. The areas for us to improve are to keep our concentration levels up, adhere to our game plan and keep our intensity going. I think that’s what happened, too many of us on the field went missing at the one time. When that happens, you usually end up on the wrong side of the scoreboard.”
The players have kept the pedal to the metal on the training field. “These guys come here and they train hard and they play hard. We had a three-week window but we still had to keep our work up. There’s a big risk when you take the foot off the gas at the wrong time. We’re on the go now fairly constant but this is a group of players that like continuous work and they’re taking their work really well at the moment.” 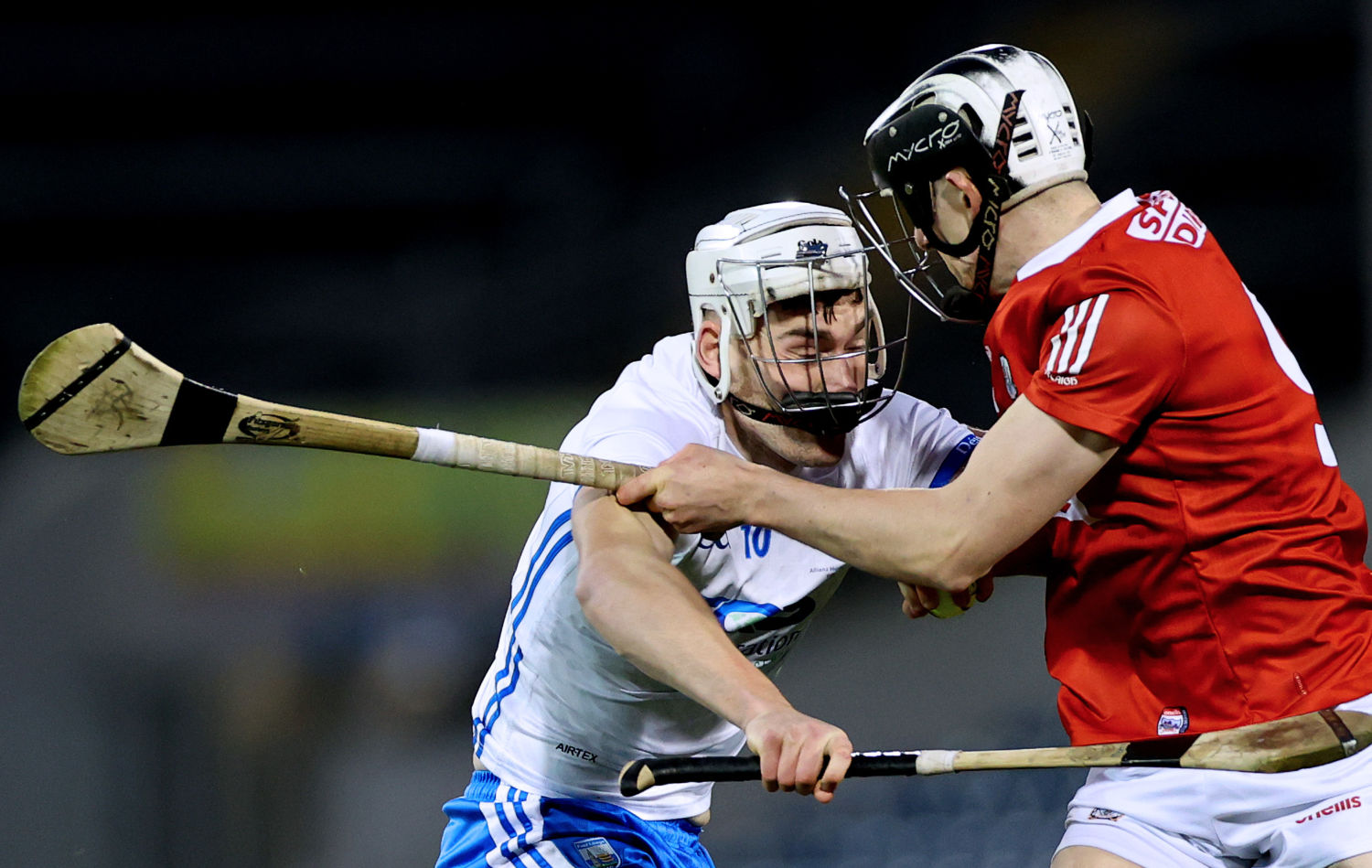 Waterford’s Neil Montgomery and Cork’s Ger Millerick battling it out during last month’s NHL Final in Thurles.
Cahill remains unconvinced about starting the championship in mid-April. “I’m finding it hard enough to get used to. We knew the fixtures from the start of the year and we tailored our training accordingly. You take Iarlaith Daly’s case for example and many other inter county players, their year is done on the back of an injury because it’s so condensed. The strength and conditioning people, the coaches, the players, everything has to be so right now to time your run properly. It’s making it very, very difficult. There’s massive workload put on these players which is something that has been highlighted for a while as to how you tailor that properly and not have such a workload. We seem to be doing the opposite here and condensing this championship into a state where it’s nearly gone professional.”
The new championship schedule is tough going on amateur players. “These players won’t admit that, but it consumes their life, it takes over. If they’re not training, they’re in recovery. There’s very little downtime, week after week. Look, I don’t know what the answer is to it. There is a lot more people higher up the chain to come up with those answers. I’d say it will definitely require looking at anyway at the end of this championship to see can we structure it a bit better. I’m a big advocate of the split season, a hundred per cent agree with that. It had to happen and I’m delighted it has happened. We’ve created a fairly decent window now for the club scene to be fair. It baffles me that we’re playing high profile, flagship games, that inspire the younger generation in the middle of April.”