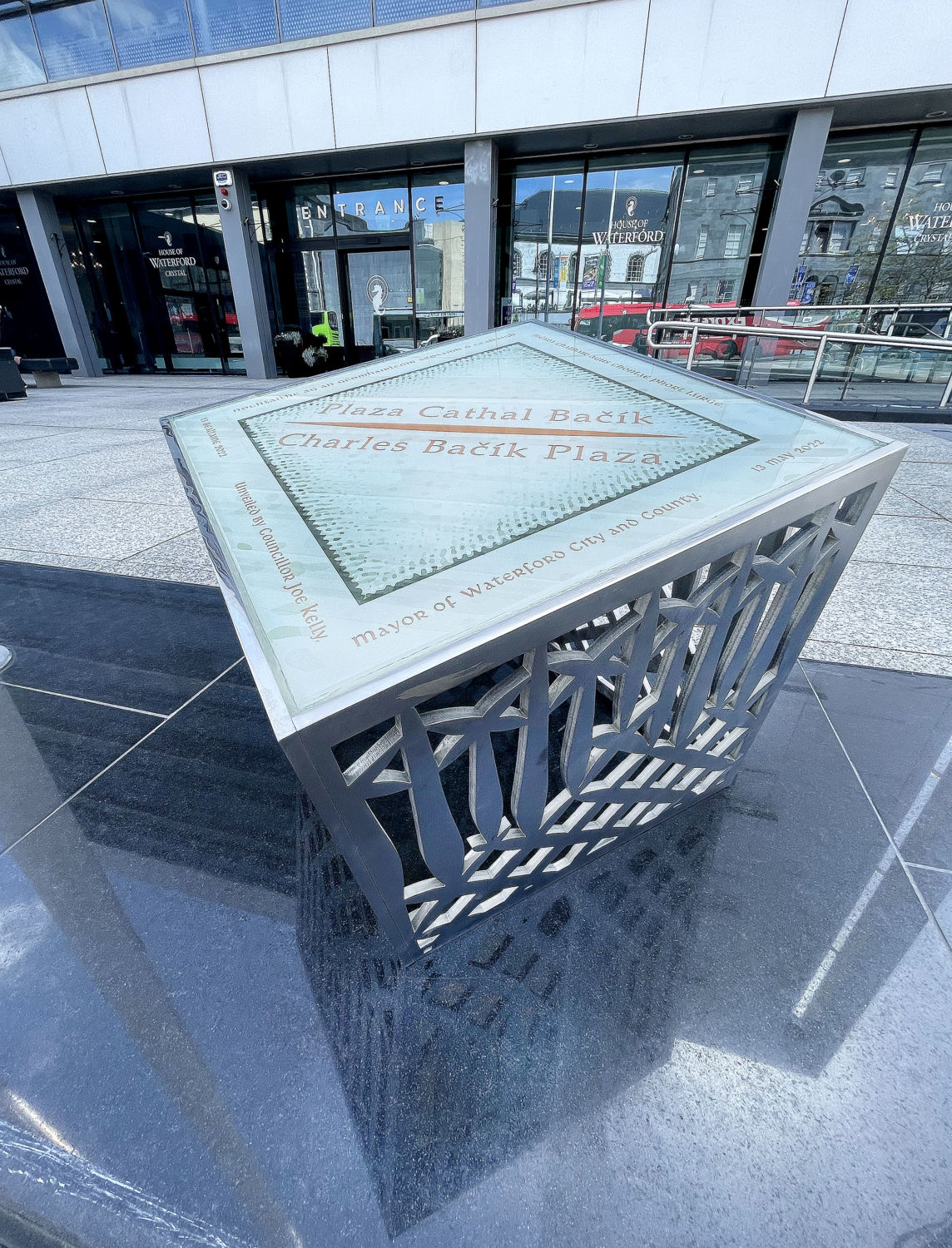 The plaque unveiled on Friday last to mark the dedicaiton of the Charles Bacik Plaza, in honor of the Czech-born co-founder of what then titled Waterford Glass. Photo: Joe Evans

IN 1946, 36-year-old Karel (Charles) Bacik arrived in Waterford. Here, Charles, along with wife Milada (née Hora) and children Milada, Edith, Karel and Jindrich (Henry) began a new life in the wake of World War II and the hoisting of the Iron Curtain.

Charles, a graduate of Charles University in Prague, was a glass manufacturer from the Czech province of Bohemia.

Having owned four glass factories prior to the Soviet takeover of Czechoslovakia, Mr Bacik also knew the realities of hardship at first hand, having been imprisoned by the Nazis for 18 months due to his involvement in the Czech Resistance.

To the good fortune of generations of Waterfordians, Bacik had met a Dubliner in Czechoslovakia, a gift shop owner named Bernard Fitzpatrick, whom he sought out soon after arriving in Ireland.

As a Royal Irish Academy biography notes, Bacik then took out a life insurance policy and, using this and other borrowed funds amounting to £15,000, he approached Waterford corporation and chamber of commerce to procure a site for a glass factory. Fitzpatrick was also an investor. They secured a site at Ballytruckle, outside Waterford, and the first sod for the new factory was turned on April 3rd, 1947. Waterford Glass, later rebranded Waterford Crystal, had come into being.

The third man to feature in the history making Waterford Glass triumvirate was another Czech, Miroslav Havel (1922-2008). In 1947, aged 25, Havel was sat in a green shed in Ballytruckle, chatting with Bacik. Where they sat, Bacik assured Havel, would soon feature six cutting machines along with a single engraving machine.

“How many people are working with you now,” Havel asked Bacik. “There’s just you,” Bacik replied.

Speaking in WIT in the summer of 2009, Havel’s son Brian noted: “When my father retired in 1987, there were 3,430 people working in the factory. That accounted for one in 10 of the city’s population at the time, an astonishing number in retrospect but a tribute to the vision of Bacik and Havel.”

That the Charles Bacik Plaza now exists in the heart of old Waterford is a credit to City & County Mayor Joe Kelly (Ind), the support he received from his Council colleagues, along with the delighted Bacik family.

The intellect, innovation and drive of two migrants fleeing oppression, making a home in Waterford and then investing in their adopted city, should not be lost amidst the ongoing upheaval and devastation in Ukraine.

At least 700 Ukrainians are now being housed in Waterford and more may yet follow, seeking refuge from Russian aggression. Approximately one in nine Ukrainians of working age have already found work in Ireland, giving something back to their adopted country. Many will, in time, return home once the shelling ceases yet some will choose to stay – and there may well be another Bacik or Havel among them.

One hopes that the roles of Havel and Fitzpatrick will also be publicly recognised in a city which will be forever associated with the industrial tradition both helped revive alongside the man that Glass staff knew as Mr Bacik.

Between the Johnstown and Kilbarry sites where Waterford Crystal edifices still stand, there are ample opportunities to fully recognise those who spectacularly revived our city three quarters of a century ago. Over to you, City Hall…