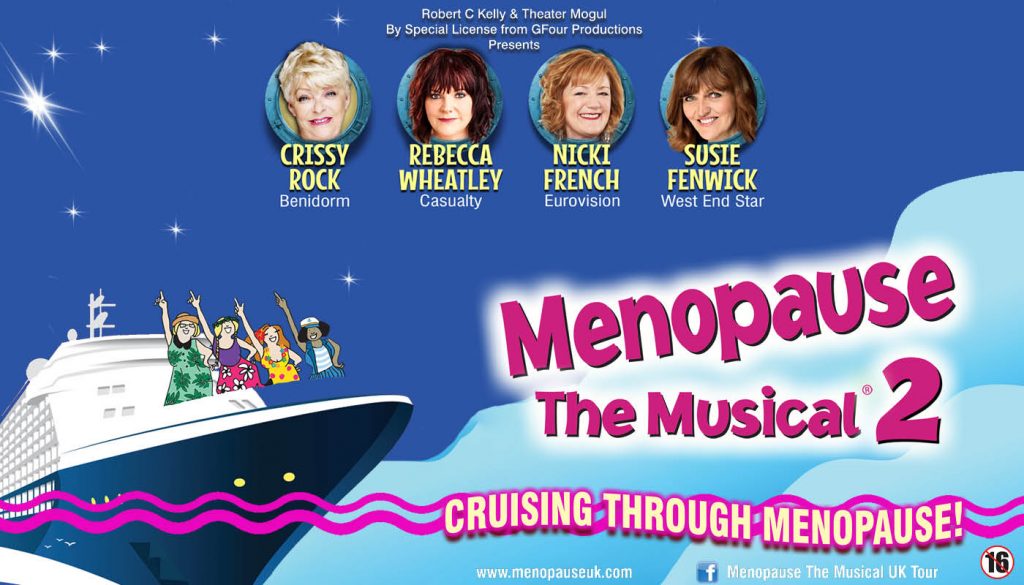 WELL I was the only man at the 6pm showing of the sequel to Menopause the Musical and there was enough perfume in the air to chloroform a bull. I was probably more of a curiosity item than many of the gags that came our way over the course of two hours. We’ve fast forwarded five years from the original Menopause the Musical to catch up with the same four characters for tales of their lives, loves and losses as they set off on the high seas.

‘Taboo subjects like the menopause – and a whole range of other women’s issues – are openly discussed, sung about, danced around and performed’

And, of course, anti-man gags were the order of the night. Well… sort of. There’s an initial sympathy for the lad who’s ringing up wondering how to cook a meal but it disappears when he is reduced to asking where he would find a saucepan. British bake-off belongs to a different generation than the current quarter of women that have reached a certain age probably beyond a certain age. When announcements come from Capt. Robert O’Salem about on-deck games, enthusiasm wanes. A rock-climbing competition meets with little enthusiasm from the folk-four.

The jokes are punched out and worked for all their might and the parodies come thick and fast with a disco beat. ‘I need a Vino’ is clever, witty and comes with a snappy beat that has the audience foot-tapping along. And is a welcome substitute for top-deck canoeing.

“Hot flushes, mood swings, memory lapses, weight gain – these are a few of our favourite menopausal things!” There’s talk of the heartache that comes when kids fly the nest, when husbands become bored… or unfaithful. And when no one feels that good naked anymore despite Channel 4 trying to convince you otherwise. Despite the distraction of the voyage and the women’s determination to enter the karaoke competition where first prize brings a dinner date at the Captain’s table, it’s the menopausal issues that focus the attention.

This is the real first prize that this show brings. The fact that taboo subjects like the menopause – and a whole range of other women’s issues – are openly discussed, sung about, danced around and performed by four older female actors in major roles that have all got excellent voices and strong acting careers. Crissy Rock performs in “Benidorm”, Rebecca Wheatley stars in “Casualty”, Nicki French sang for the UK in Eurovision and Susie Fenwick is a regular in the West End.

Periods, sex, pregnancy, bladder leaks, farts, sweats, living with men and the menopause – and all the irritations that tag along — find their way in the clever lyrics of the up-tempo parodies that drive the show along. In fact, there’s so much sung in this show that it feels more like a cabaret with dialogue.

It would be easy to be cynical about this show but this would be wrong. The exclusively female audience – apart from your humble reviewer – loved this show, nodded their heads in agreement at the problems of menopause mentioned, sighed in sympathy at the problems of living with men and bopped along to the disco beat. The ability to laugh at problems won’t solve them but always helps to bring the courage to face them.

At the end, the audience was on its feet – swaying along, singing along – and then sauntered out onto The Mall with smiles on their faces.

Now… who could possibly find any fault with that? Bring on Menopause the Musical 3… I’ll be there.