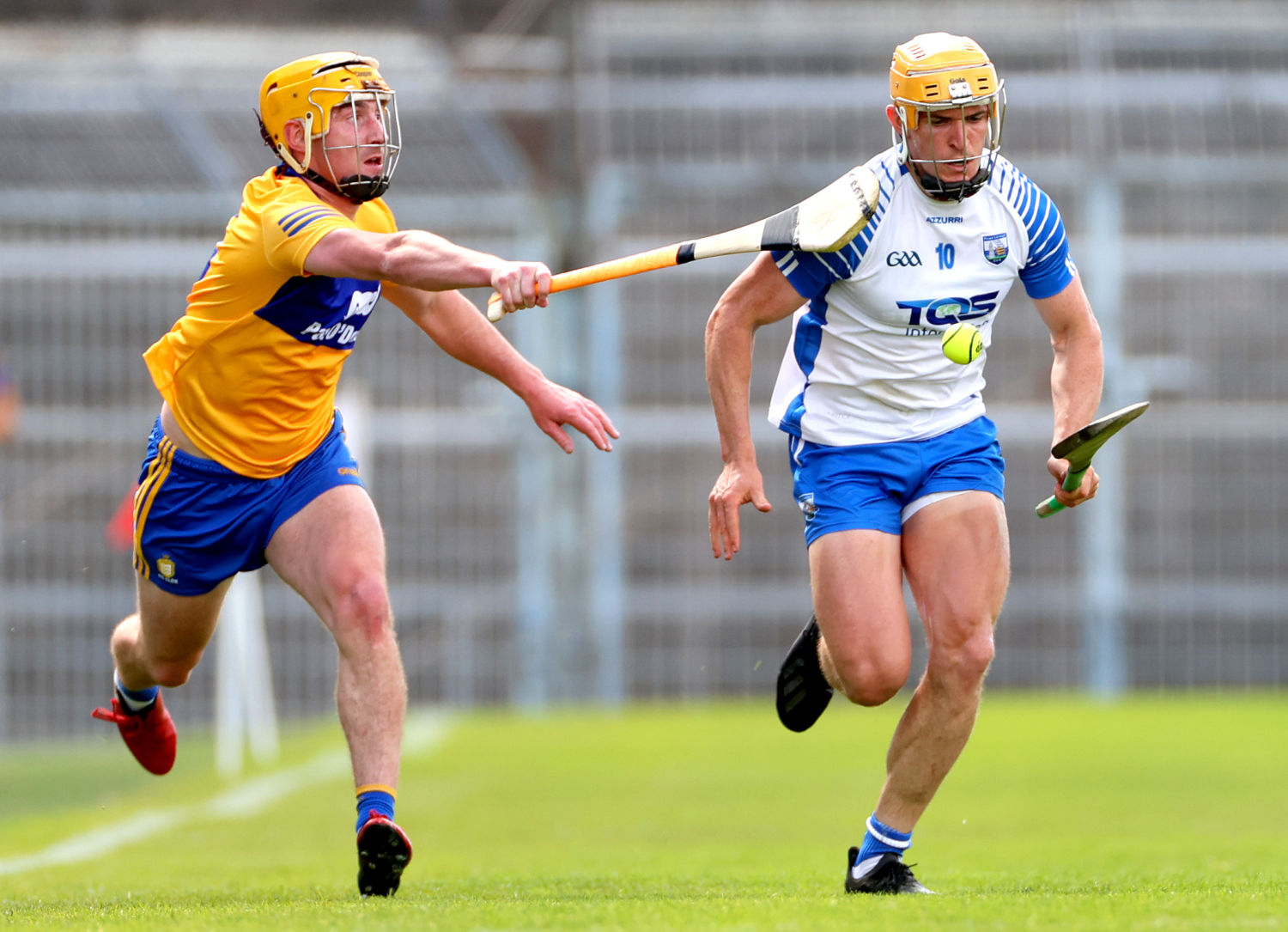 Peter Hogan of Waterford running at the Clare defence when these counties last met in the Munster SHC in Semple Stadium, Thurles last June. Photos: Inpho.

With just seven days to recover from last Sunday’s bitter disappointment Waterford will set out for Ennis on Sunday next to face a Clare side already qualified for a second tilt at Limerick in the Munster Final.
In sharp contrast to their opponents Waterford’s All-Ireland hopes hang by a thread as they depend on Tipperary recording a first win of their championship campaign against Cork in Thurles regardless of the result in Ennis.

BETTER THAN THAT
That much said, championship survival or not a season that has seen silverware won as Allianz League champions cannot be seen to end on a note such as we saw in Walsh Park on Sunday last.
This Waterford team is better than that. While Clare have come in under the radar in this championship and improved from game to game there is nothing to suggest that man for man they are a better side than Waterford. At their best Waterford are a match for any team and they have shown that to be the case. Everyone, players and management, must hold their hands up when it comes to analysing last Sunday’s below par performance and hopefully there will be no knee jerk reaction on the part of management and changes will be minimal to allow players the opportunity of redemption.

PLAYERS WILL BE HURTING
I doubt if anyone is hurting from last Sunday as much as the players are and they will surely want to set the record straight on Sunday next. Clare brought tremendous intensity to their draw with Limerick and Waterford must match that here. Unlike the position against Cork, Waterford will go into this game as massive underdogs and regardless of what the formbook says Waterford are always in with a chance of beating Clare.
It remains to be seen if Lohan will rest any of his star players with the Munster Final against Limerick just two weeks away though it could be seen as being unfair to Cork if he does. Waterford will get no favours so it all comes down to how they perform on the day as individuals and as a team. Every player will need to step up on his performance and sustain it over the seventy minutes. The puckout strategy will have to be addressed, chances taken and discipline maintained.
Just where Waterford might make changes in this game with a view to improvement is difficult to say. It would seem unlikely that Jamie Barron will again start here but could still make a difference when introduced. It is interesting that Ian Kenny was included on the bench last Sunday and perhaps surprising that he was not used. He may be an option to freshen up what has been a suspect defence now. 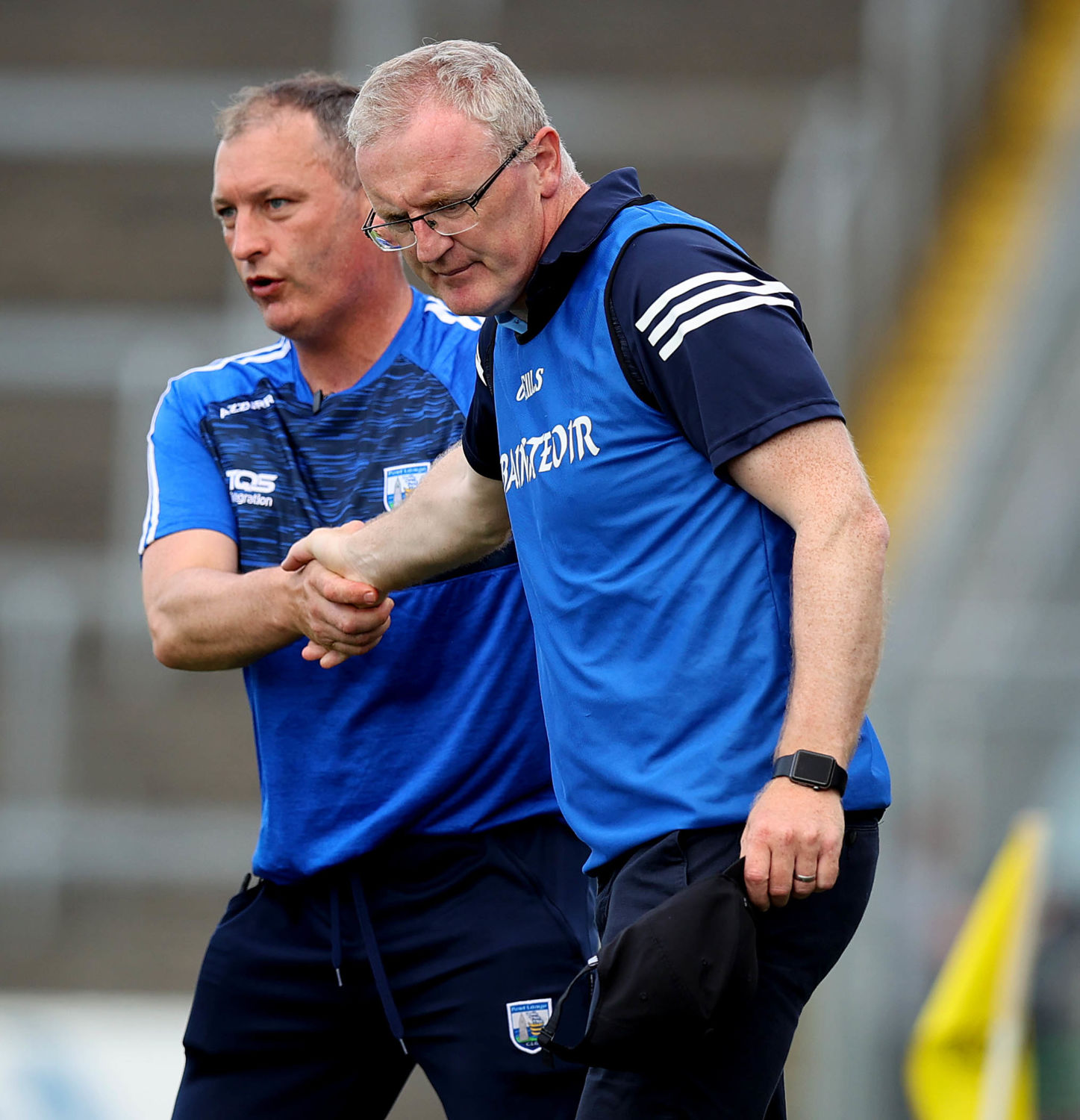 Manages Brian Lohan and Liam Cahill will come face to face again on Sunday in Ennis.

GLEESON AVAILABLE
Austin Gleeson will be available as he was sent off on a second yellow card and hopefully we will see quicker delivery to the full forward line with Stephen Bennett having a greater presence close to goal with Hutchinson and Kiely. One would hope that Jack Prendergast and Calum Lyons when breaking forward will create openings and not run up blind alleys. We need to see the individual flair and the pace that produced goals in the league and against Tipperary come into play again on Sunday next. Waterford can get a result here.
The odds are stacked in Cork’s favour but Tipperary always want to beat Cork and with something to play for they will be flat out on Sunday, particularly as they are playing in Thurles. It had been originally expected that with the Clare Waterford game at 4pm the Cork/Tipperary game would be on at 2pm. But understandably Munster Council has decided that both games will start at 4pm. At the time of writing it is not clear if one or either of the Munster games will be live on television.