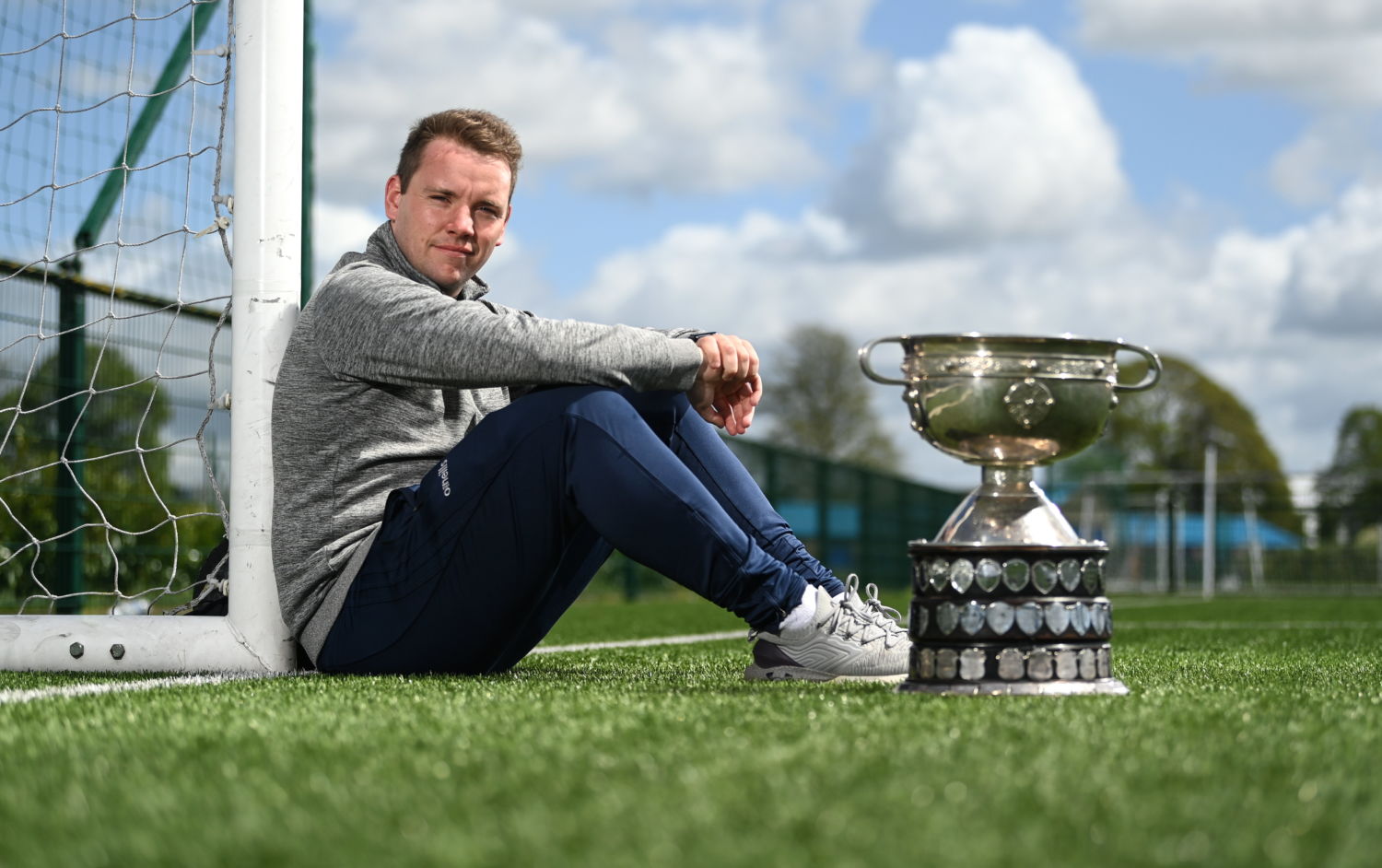 Villa manager, Conor Coad, with the FAI Junior Cup at last week’s Press Day at the FAI Headquartes at Abbotstown. He’ll be hoping to get his hands on it for real on Sunday in Turner’s Cross. Photos: Sportsfile.

Sunday next is going to be an incredible day for Villa Football Club as they take to the famed Turner’s Cross turf to play their first ever FAI Junior Cup final in the Centenary year of the Association as they take on Pike Rovers in the 2022 decider with a 2pm kick-off.
Since their impressive semi-final win over Galway’s Salthill Devon a couple of weeks ago, there has been an unbelievable buzz around Connor’s Park, including them securing the club’s first ever Premier title on Wednesday night. But the time for talking is nearly done now as Conor Coad’s side are focusing on trying to overcome the kingpins of Limerick football.

BOOKIES BACKING VILLA
The bookies make Villa the favourites to lift the famed trophy based on their wins over the experienced Killarney Celtic, St. Michael’s, Peake Villa and Salthill, but for this young side, it will be an occasion that they’ll be hoping to meet in the right mindset like many of the rounds that have gone before them.
For their manager Conor Coad, himself a vastly former League of Ireland player and the grandson of the late former Waterford FC great Shamie, he’ll be hoping that his players can produce another moment that will hopefully help deliver victory.
Speaking to the Waterford News & Star ahead of Sunday’s final, Villa manager Conor Coad said, “I think that it took me a couple of days for it to sink in that we have reached the final and I suppose it’s down to the heroic efforts of the players throughout the course of the year.
“I always find it when you look back at it and analyse it that you have to look at it from the footballing side, but I think when I watched back the Salthill game, it was the emotional side and the occasion. It’s a great feeling to be in the final, and it’s going to be a great occasion for the club.
“It’s a massive occasion for us all. It’s not something that we’ve had the chance to experience before as a club so in that regard it’s a huge day. It will probably be the biggest day in our history to date. I suppose it’s great to get to a final, but finals are not all about getting to, they are there to be won.”

THE RIGHT MINDSET
“That’s what we’ll be looking to do on the day. I suppose for myself, I obviously made the change from playing into coaching and management at a young age so I suppose it’s probably one of my greatest achievements in leading this team to a cup final.
“It’s not only about that. I probably look at it at this stage overall as one of the most enjoyable that I’ve had in football. Having something like this to look forward to on Sunday is just incredible. I don’t think that there will be as many days for me bigger than this.
Reflecting on the road to the final, Coad said, “I suppose it’s a long time now since we played Tycor in the first game of the competition. As a group we had an aim this season which was to target winning the league for the first time in the club’s history.
“We were lucky enough I suppose that we drew all the teams from the last 32 to the final at home. I suppose you could never have the confidence that we were going to get to the final. As you know as I have been telling you all year, it was a case of taking one game as it came whether that be league or cup.
“Having home draws was something that we were lucky with this year, and I suppose when you start winning, there is that mindset to look for, but that’s down to the group. The lads have answer the call on the pitch because a draw is only a good draw if you make it count on the pitch. We’ve been lucky to do that.
“We’ve played some really top teams with great FAI cup experience over the course of the competition like Killarney Celtic, St. Michael’s, Peake Villa and Salthill Devon. We now prepare for the hardest challenge of them all in Pike Rovers.
“It’s a day to really look forward to now. I’ve always been one of those person to say that if you are old enough, you are good enough. A lot of our lads are young, but they have gone in whether it be underage League of Ireland or first team League of Ireland not just with Waterford, but with other clubs.” 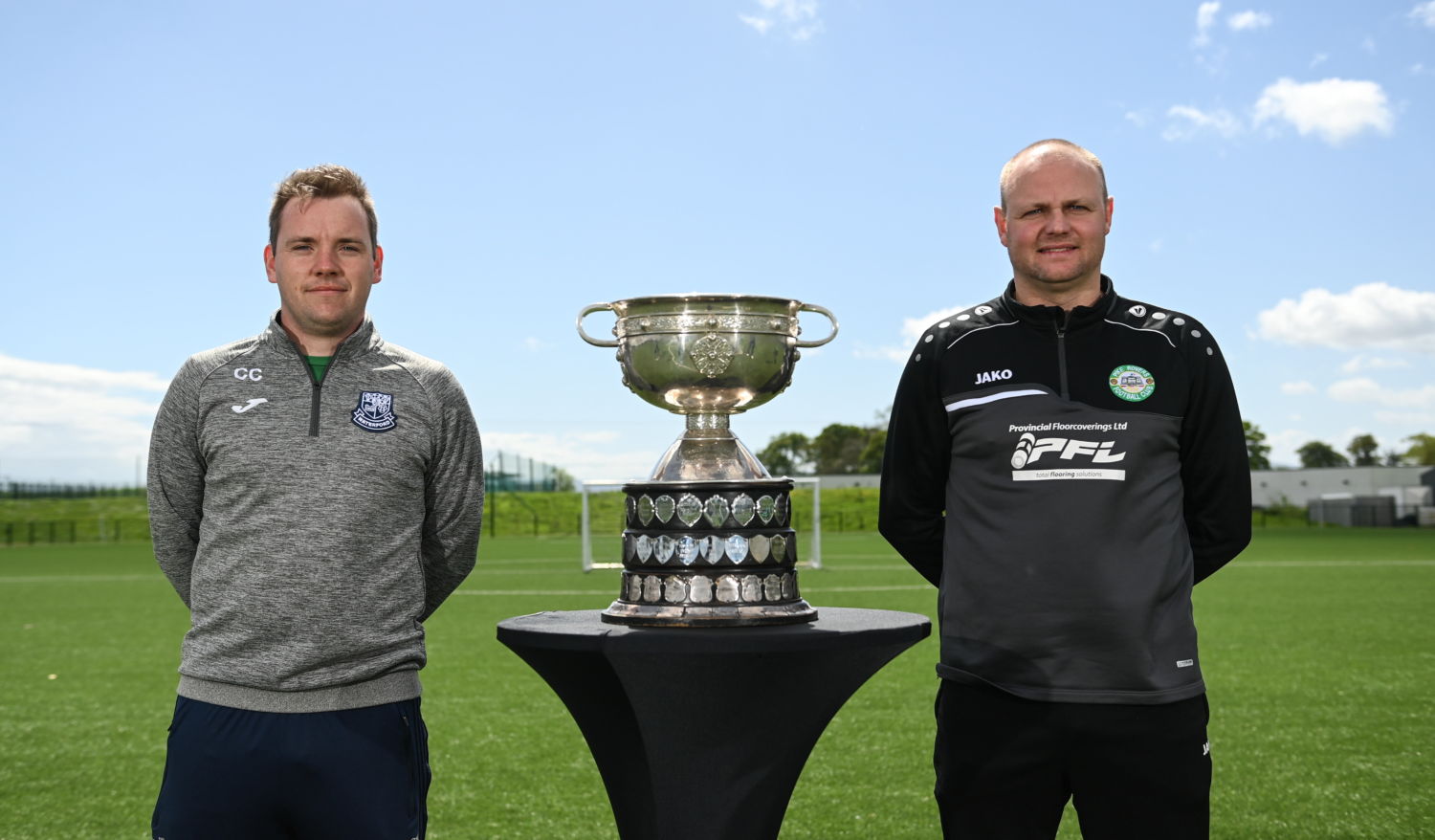 In terms of the occasion and the venue, Coad said, “I suppose we’re lucky enough that a lot of these lads have played in Turner’s Cross before and a lot of these lads have played in front of big crowds before so that’s not something that I will be worried with about with this group at all.
“We make a big point of trying not to get involved with the emotion or the occasion. We treat every game as a game and this will be no different for us. This is a football game and we’ll try to look after the basics of any game like prepare properly and train properly. We’ve had a couple of games since the win over Salthill.
“I think that it’s important that we try and get the lads to leave everything on the pitch in terms of a work-rate point of view on Sunday. If we stick to the basics with the quality that we’ve got, I see no reason why we can’t end up on the winning side as a result of that.
“Pike Rovers are one of those teams that when you hear the phrase of the junior cup pedigree, they are one of them. They have been around finals for a number of years and have won the competition previously. We’ve saw them play against Hibs, we’d be familiar with a few of their players, and they are experienced.
“Our lads are young, but there is a lot of big game experience in there. I think that there is a fearless in our group as well that no matter who we play against that we’ll have full confidence in ourselves. We’ll approach it like any other game. We’ll try to focus on ourselves and put our best foot forward.
“I think that you can see how much that this means to the people of Villa. I’m lucky enough to be here all my life bar a spell at League of Ireland level. A lot of these lads came through the Villa academy and they want the best for this club. Hopefully we can deliver a performance that will be good enough to win us the game.”