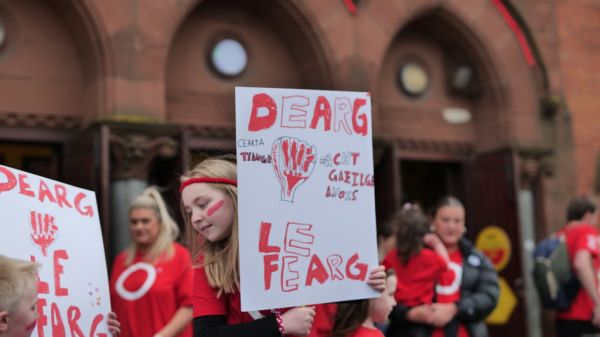 Thousands of red-clad protesters marched through the streets of Belfast on Saturday afternoon to call for protections for the Irish language.

Large crowds comprising of Irish-speaking families, community groups and sports clubs marched through Belfast city demanding “language recognition, respect and rights”, as well as calling on the UK government to implement an Irish language law, as had previously been promised.

The An Lá Dearg protest left from Cultúrlann McAdam Ó Fiaich and made its way to Belfast City Hall where speakers and singers addressed the crowds.

Five-year-old Dáithí Mac Gabhann was among those who addressed protesters at city hall. Other speakers included Katie Irvine, an Irish language youth worker from Glór na Móna, and Dónal Ó Cnaimhsí from the Gaoth Dobhair Gaeltacht in Co Donegal.

We are here to stay and demand language rights now!!!

The campaign network An Dream Dearg organised another An Lá Dearg protest in Belfast in 2017 which also attracted large crowds.

Spokesman Conchúr Ó Muadaigh said they were “blown away” by the level of the support shown on Saturday, and claimed it was “the biggest Irish language demonstration of a generation”.

“An Dream Dearg has built a grassroots movement that has pushed the Irish language from the margins to the very centre of political and civic discourse both here and internationally, a movement that has spoken truth to power and ensured our community would no longer be treated as second class citizens, marginalised or excluded. Those days are gone for good.

“The Irish Language Act is long, long overdue. Our community cannot and must not be made to wait any longer for the same language rights enjoyed by citizens across these islands.”

Campaigner Clíondhna Ní Mhianáin said after they were told in 2014 that they could not have a new Irish-language secondary school in Derry, a public campaign led to the opening of Gaelcholáiste Dhoire in 2015, with 13 students.

“Now almost 300 students have come through our doors, and as a member of the first year group, I am now finishing my journey. None of that would have been possible without a community campaign for equality and rights, without Irish speakers demanding better, demanding an Irish Language Act.”

Councillor Mal O’Hara, deputy leader of the Green Party in Northern Ireland, tweeted from the protest that it was “great to see thousands of activists descend on City Hall calling for the honouring of agreements made years ago”.

He said: “They shouldn’t have to. We have a duty to promote and protect indigenous and minority languages.”

He added that Britain’s Northern Ireland secretary Brandon Lewis “should get it done”.

Legislative protections for the Irish language in Northern Ireland were a key plank of the New Decade, New Approach agreement that restored power-sharing in January 2020 after a three-year impasse.

They were included in a broader package of cultural laws that include an Office of Identity and Cultural Expression to promote respect for diversity as well as an Irish Language Commissioner and a commissioner to develop language, arts and literature associated with the Ulster Scots/Ulster British tradition.

The implementation of the package has stalled amid continued political contention over the matter.

Last June, the UK government pledged to pass the legislation at Westminster to break an impasse between Sinn Féin and the DUP over its introduction in the Northern Ireland Assembly.

However, the UK government failed to bring forward a Bill before its self-imposed October deadline last year.

On a visit to Northern Ireland on Monday, British prime minister Boris Johnson pledged to deliver on the cultural package in the coming weeks.