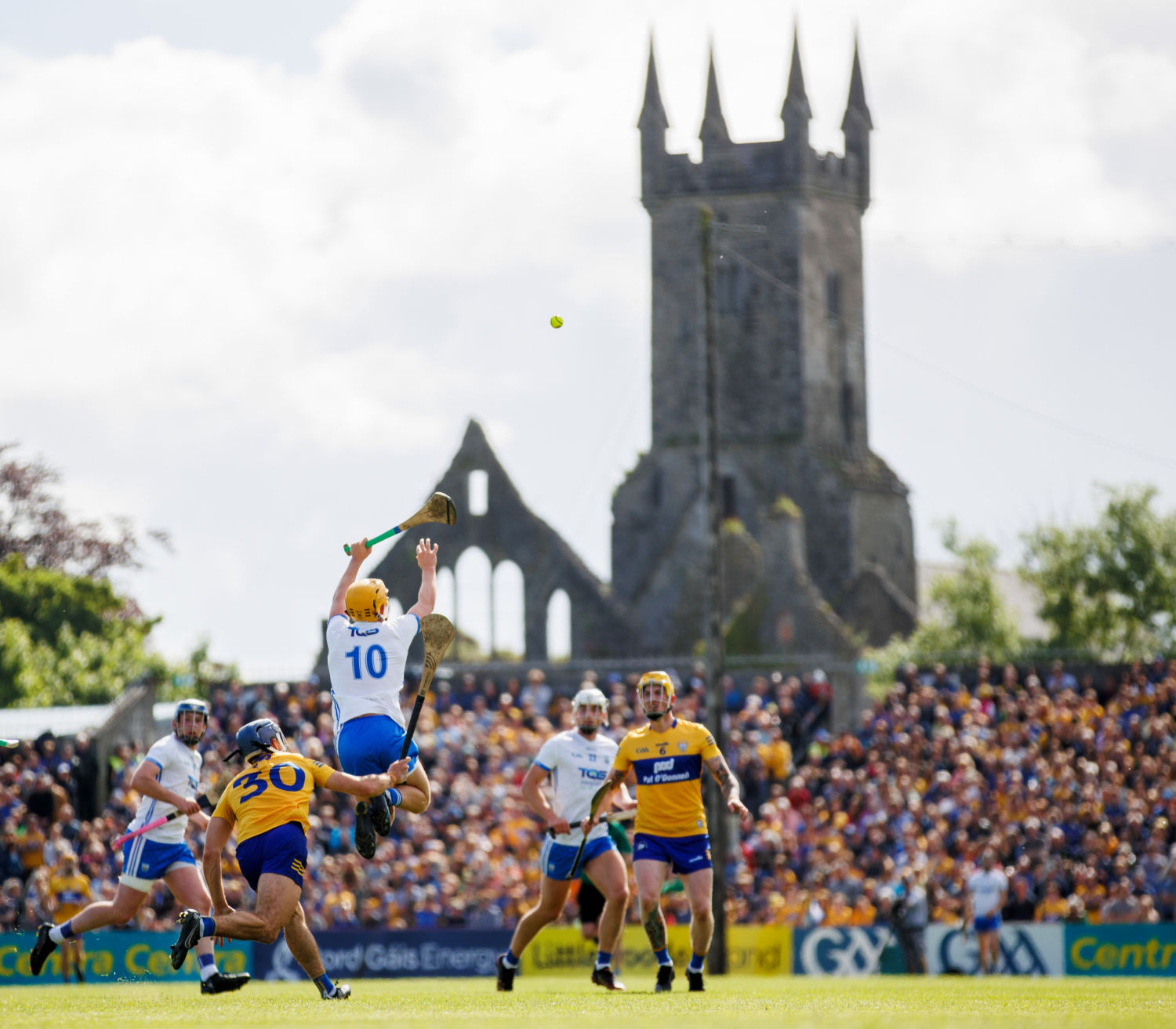 Waterford’s Jack Prendergast attempts to gather a high ball at Cusack Park during the Deise’s defeat to Clare.

KNOCK-OUT Championship hurling appears to suit Waterford. How else does one explain the productive campaigns of 2020 and 2021 given the Déise’s abject form under the round robin format?

A year after taking Galway down the stretch in the All-Ireland Final, the best that Derek McGrath’s Waterford could manage under the new format in 2018 was the ‘ghost goal’ draw with Tipperary.

The following year on Páraic Fanning’s watch, a promising run to that year’s League Final didn’t replicate itself come the Championship, as four straight defeats – three of them heavy – demonstrated.

Covid-19 forced Croke Park to reintroduce the backdoor format and Waterford prospered, with any scars inflicted in the provincial reversals to Limerick and Clare well healed come the All-Ireland series.

Given their form over the past two years, in addition to a deserved, goal-heavy League title, talk of a productive summer for Waterford appeared highly justified. Yet it has all gone terribly wrong for Liam Cahill’s side and it’s hard to figure out why performance levels have so alarmingly dipped.

From the 29th minute on against Cork at Walsh Park, Waterford’s competitive instincts appeared to slip gears. Within a dozen minutes of the throw-in at Ennis, by which time Tadhg de Búrca and Jamie Barron had been withdrawn due to injury, the visitors were already bailing water out of the boat.

Irrespective of events in Thurles, an entire week had passed since Waterford’s second half collapse against the Rebels and in the interim the need to make a front-footed start would have been trumpeted by Cahill.

But where were the possession dislodging shoulders, the fine fielding and the supply of good, low ball to the inside line which had been so evident throughout the League campaign? All were bewilderingly absent. By half-time, Sunday’s match was over as a contest and it was difficult not to consider Waterford’s performance as anything other than a surrender.

And when Clare switched goalkeepers on Sunday, just as Kilkenny did in the 2008 All-Ireland Final, the extent of Waterford’s rapid decline gained an even sharper focus. A substitution of that kind should sting every single Déiseman to his core.

But let’s be straight: you win together and you lose together. This is not about singling out any particular player or positional adjustment. Collectively, Waterford were miles off the desired pace in Ennis, just as they were for the closing 45 minutes against Cork. Ultimately, the late rally against Limerick proved a false dawn in the context of the subsequent two fixtures.

After 12 round robin matches over three Munster Championships, Waterford’s record now reads 10 defeats, one draw and just one win. That’s reminiscent of the 1967-81 era, during which Waterford failed to reach a single provincial final.

And in addition to the ongoing wait for Liam MacCarthy, it’s now 12 years since Waterford last lifted the Munster title on a memorable Saturday night under the Semple lights. Granted, the gravity of a provincial title is not what it once was given the revised Championship format yet for a county such as Waterford, winning Munster still matters. At least it ought to.

“Today is obviously very disappointing,” said Liam Cahill in the wake of the poorest Championship performance during his managerial reign.

“It’s something we won’t make a rash decision on now. From my side, I just wonder what else can be done to bring these guys to the next level. I’m quite happy to sit down with these players. I have a very, very good, healthy relationship with every one of them. They’re extremely honest men. Before I do anything I will definitely sit down with them to see where their heads are at before we do anything rash.”

When announcing his decision to remain as Waterford manager last August, Cahill said that both he and Mikey Bevans felt they had “a sense of unfinished business. We made significant progress in the past two years but we feel that there is still more to come from this incredible bunch of players”.

That sense of unfinished business is all the more pronounced in May 2022 than it was in August 2021, albeit for entirely different reasons. But whether Cahill feels he is the man to siphon out the Déise’s dirty petrol between now and next January remains to be seen.