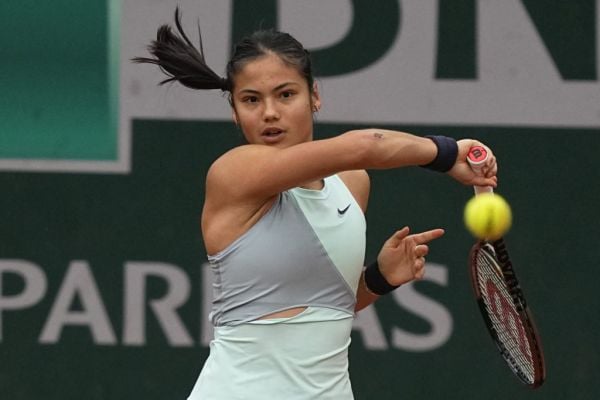 Emma Raducanu has turned to pumping iron in a bid to keep up with the heavyweights at Roland Garros.

British number one Raducanu knows she needs to improve on her physicality having picked up a series of injury niggles since her memorable US Open triumph eight months ago.

The 19-year-old also knows she no longer has the element of surprise that helped carry her to success at Flushing Meadows.

So Raducanu has embarked on a new fitness regime, which already seems to be paying off at the French Open after she outlasted Czech teenager Linda Noskova over three sets in the first round on Monday.

Raducanu, who faces Aliaksandra Sasnovich of Belarus in the first match on Court Suzanne-Lenglen on Wednesday, said: “I think that it is definitely improving. One thing that I have been doing in the lead-up for this week and the whole of last week, I was doing a lot in the gym.

“A lot before practice, after practice, just keeping all the muscles fired up. It’s something I probably haven’t really done before, train through tournaments.

“Yeah, I am pretty pleased with how I was out there physically, and I feel really good, to be honest.

“I think definitely players kind of know more about me, and they would have seen me play more whereas last year, maybe if I was just a random qualifier, they wouldn’t have put as much research or looking at me, how I would play.

“To counteract that I’m always looking to improve in all sorts of aspects. I think one was definitely physically, just to be able to last in the longer points, especially on the clay courts.

“Also just adding elements of unpredictability in whatever way that may be.”

Cameron Norrie says he is feeling at home on the Paris clay having picked up his first title on the surface in Lyon at the weekend.

The British number one, now rubbing shoulders with the world’s top 10, swept past French wildcard Manuel Guinard to set up a Wednesday showdown with Australian qualifier Jason Kubler.

“I feel like I’m a more experienced player and a better player than I was a couple of years ago. I feel the same, but just my game’s improved and I’ve just got to keep backing it up every day.

“I’m still really enjoying playing at this level. Still I’m not a guy that I’m going to come out and just blast guys off the court. I’m going to take time grinding the guy down.

“I have to use my legs a lot and run and run the guy down, otherwise I have no shot with these guys and their level. So I’ve always got to do it the hard way and I managed to do that more and more on this surface.”