WATERFORD Dramatic Society (WDS) has been loved and respected in equal measures since it was founded in 1935. A host of Waterford’s and Ireland’s most famous theatre, radio, TV and film personalities have worked with the group in both amateur and professional capacities over its long history, amongst them the late Anna Manahan, who débuted with the society at the age of 17. After a short break, with Covid not helping, WDS returns to a Waterford stage – in Garter Lane Arts Centre – from Wednesday, May 25, to Saturday, May 28, with Tom Murphy’s remarkable play “Bailegangaire”.
Directed by Frieda Ryan, who has an illustrious history with WDS, the play will star some top drawer local female talent in Denise Quinn, Vivienne Cummins and Clodagh Power.
“Choosing to produce ‘Bailegangaire’, by the Galway playwright, Tom Murphy who sadly died on May 15, 2018, was a no brainer for Denise Quinn and me,” Frieda told the Waterford News & Star. “It’s to do with our age and experience both in life and in theatre. It’s also because we had worked so well together on Baglady by Frank McGuinness for Red Kettle Theatre Co., a play which is basically a monologue. So we have a great deal of mutual trust. Mommo in Bailegangaire has a big story to tell and it needs an actor of great power and stamina, as well as the primary ingredient, buckets of talent, all of which Denise has in spades! As have the other two actors.”
Denise holds an M.A. in Drama and Theatre Studies and has worked in theatre for many years as an actor, director, writer and teacher. She says that playing Mommo is probably one of her most “challenging and rewarding roles”.
“This is a fabulous play and a fabulous piece of writing,” Denise said. “I studied it in college and thought that it was a great play. Now that we’re actually doing it, I had no idea how good it actually was. The arc of Mommo’s story, and the way she tells her story is actually of mythic proportions. The yarn she’s telling is legendary and the language is stupendous.” 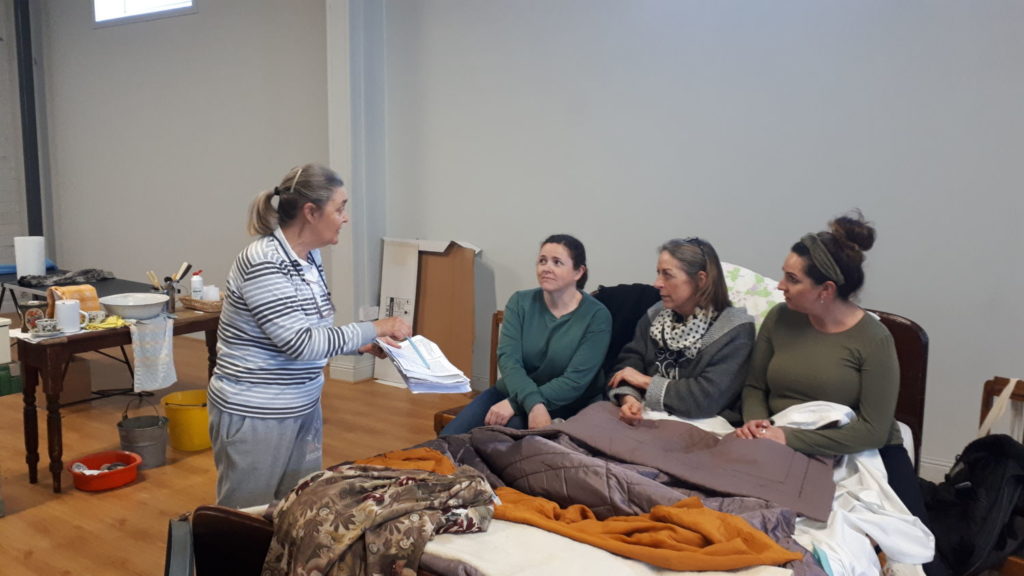 Set in 1984 in the West of Ireland the story is tragic, but with a huge amount of humour.
“The two granddaughters in the play, who have shared Mommo’s home and care for a lot of their lives, are key to the story and to a central theme of the play, home, and, by extension, family,” Frieda continued. “It’s been described as ‘redemptive comedy’ and there are moments of dark hilarious comedy as well as high drama, pathos, love and forgiveness but it is the relationship with one another and with Mommo and the wonderful way the three actors create the electric atmosphere on stage that makes this a must see play.”
Clodagh Power plays Mary, and she told the Waterford News & Star that she’s been doing laps of the town listening to a rehearsal the cast did to help her with the “wordy lines”.
“It’s not the easiest play in the world to learn but it really is magnificent,” Clodagh said. “Rehearsals are going really well though and I’m so happy to be working with Waterford Dramatic Society again. I remember working on Translations for, I think, the 70th anniversary and Jim Nolan was directing. We were saying that we’re doing well for a bunch of amateurs and Jim said ‘no no… amateur means for the love of something’ and I had never heard that before. WDS really matters because the cast and crew are working, taking care of their families and putting in so much heart and enthusiasm into the piece.”
“This is a challenge for all four of us but with massive rewards in what we are creating,” Frieda concluded. “It’s a pleasure and a privilege for me to have this opportunity to work with Denise, Clodagh and Vivienne on this seminal work and I truly hope the people of Waterford come out in their hundreds to see it!”
You can see Bailegangaire by Waterford Dramatic Society in Garter Lane from May 25-28, with tickets from www.Garterlane.ie

Double the May Bank Holiday fun

Remarkable piece of sculpture on display in Garter Lane